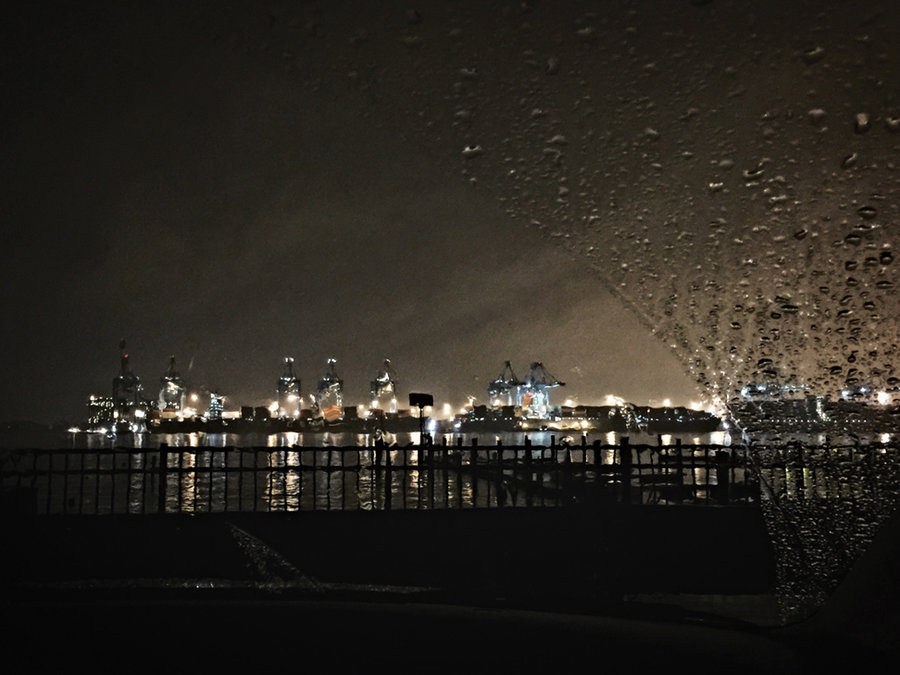 Instagram accounts are full of moments captured suddenly for others to share. People post and categorize photos geographically and topically. Not surprisingly, many photos are of pets and food, or selfies. But these photos tell stories of Hudson County. Photos were found using a hashtag of each city in the county.

Cris Rosa was at 16th Street-DiDomenico Park in Bayonne with an old friend when it started to rain. From the park looking west is a view of cranes lit up at night at Port Elizabeth.
“We both paused and took a moment to look out the windshield,” said Rosa.“It had cleared up due to the rain ceasing, and we commented about how the town can carry a unique beauty, especially when time has been spent far away from anywhere like it…I wanted to remember that night and the many like it I had spent watching the bay.” You can follow Cris Rosa @cretinoncretonne.

White Mana in Jersey City specializes in slider burgers and fries, and few do it better. It’s a favorite of locals, including tour guide Tom Schoenewald, who discovered after taking photos that the building was originally built in New Jersey, exhibited at the 1939 World’s Fair in New York City, and brought to Jersey City after it was purchased in 1946.
“I’ve lived in Northern New Jersey since 1996 and have passed White Mana many times and always wondered what its history is,” said Shoenewald. “My last trip through we got stopped at the traffic light and I knew I had to snap the picture and actually research the diner’s history.”
When he began editing, he decided to make the photo red, black, and white. “Red and yellow are two colors that make all of us, subconsciously, feel hungry,” said Schoenewald. “I also see the red as representing the passion and hunger of Jersey City to return to its former glory as a local destination, not just a city to pass through on the way to New York City. Ultimately, tweaking the red brings hope to this brooding photo.”

Another photograph taken by Tom Schoenewald is in North Bergen on the Palisades overlooking the Hudson River and Manhattan skyline. Schoenewald was walking one morning when he noticed the bright reflections of the sunrise on a building in Midtown, so snapped the photo with his iPhone.
“I wasn’t out to specifically take pictures that day, it was more about exercising,” said Shoenewald. “But I am always very aware of photo opportunities around me, and the thought of a great shot is always on my mind.”
Shoenewald spends 180 days a year as a tour professional traveling the United States leading groups of tourists by motor coach to see the nation’s national parks, monuments, sporting events, and New England foliage.
Schoenewald generally likes action in his photos. “My favorite shots are of everyday people in the throes of living their lives,” he said.“My least favorite are posed pictures with the subject staring into the lens.”
For that reason, he frequents Braddock Park in North Bergen, “which has great foliage, a lake, a Veteran’s Memorial, and a lot of sporting activities that lend themselves to amazing action shots.”
When giving tours, Shoenewald tells passengers to constantly “view the world as a never-ending photo opportunity.” He added, “Hudson County is a treasure trove of photo ops for photographers of all abilities.”
You can follow Tom Shoenewald on Instagram @tommyess2015 and check out his photography portfolio on Flickr: flickr.com/photos/tommytex2001.

The first time Steffen Klingenhoefer visited the cliffs at Hamilton Park in Weehawken, a super moon (a full moon at the closest point in its elliptical orbit to Earth) was rising over Midtown Manhattan as photographers with big lenses were already waiting on the ridge to zoom in for the perfect shot.
“I looked down to explore the surroundings when I spotted the neatly aligned houses with the beautifully colored trees in front,” said Klingenhoefer of the Weehawken waterfront condos. “So instead of getting my tele[photo] zoom [lens] I grabbed the wide angle lens and took the picture.”
You can follow Steffen Klingenhoefer @gestaltgesetze.

Having recently moved to New Jersey from Mexico, Mariana Penelope uses Instagram to stay connected with friends from all over. Penelope came to learn a new language and a new culture, as well as to make new friends. Her adventures find a home on Instagram. On one autumn day after brunch, a friend snapped a photo of her in Sinatra Park with yellow leaves falling between her and the skyline view. “It was a beautiful day, the weather was perfect, with fresh autumn air, cool but not cold, allowing us to talk and enjoy the stroll in Hoboken with it’s incredible view of the city,” said Penelope.
She said friends from Mexico follow her on Instagram. “They love it! I’m having the time of my life, and they share my happiness,” she said.“And at the same time I transmit to them the desire to come and enjoy experiences like mine.”
You can follow Mariana @marianatostado.