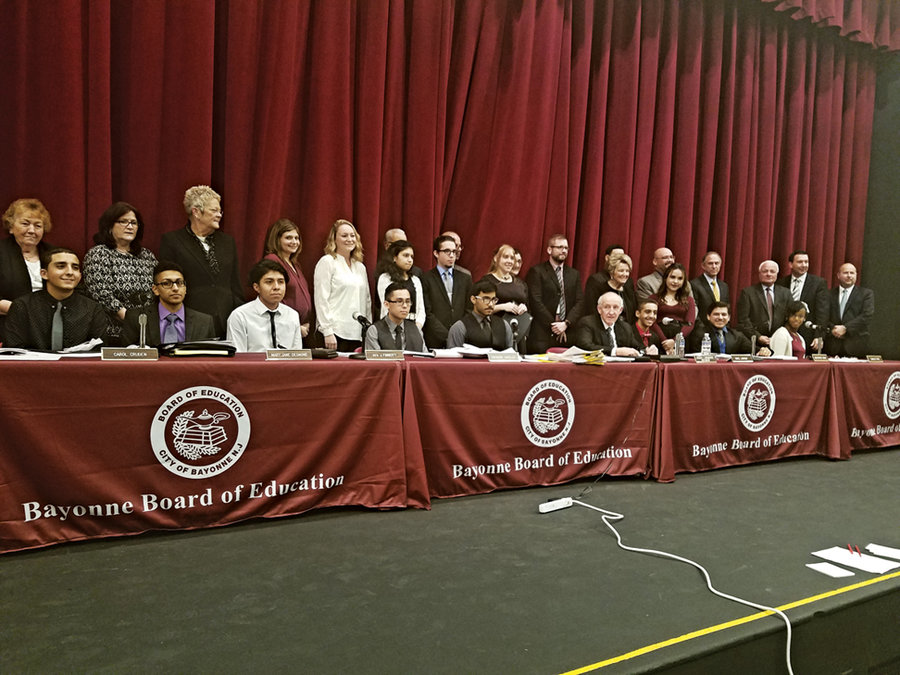 The Bayonne Board of Education’s 2015-2016 operating budget may include a $2.2 million deficit, according to a statement from Mayor James Davis. The statement cited “preliminary information” deriving from a mandatory annual audit of the BBOED by the NJ Department of Education. In the statement, the mayor attributed the potential structural deficit to the “mismanagement of funds,” warning such a deficit may have “wide-ranging and far reaching implications for the district and community as a whole,” notably students and district employees.
BBOED President Joseph Broderick said that the board had not yet received the audit report as of Dec. 1. “Right now, we are in the process of completing the annual audit, so we didn’t get [the report back] yet,” said Broderick. “It’s supposed to be done very soon.”
A 2014 referendum mandated the BBOED change from an appointed board to an elected one. Davis called that transition “at times messy and uncomfortable,” but also a “necessity” for the increased transparency an elected board has over an appointed board. His statement called for accountability and offered cooperation with the city.
“I view this news as not just one isolated mistake, but as an indicator that more needs to be done,” Davis said in the statement. “Furthermore, I stand ready with the Board of Education, parents, teachers, administrators, and citizens of this city to ensure that those who have put our school system’s fiscal solvency in jeopardy are held fully and unconditionally accountable for their actions.”

After a contract was offered by the BBOED last week, the Bayonne Teachers Association and the BBOED reached a “tentative agreement on certain items of the contract,” according to BTA President Alan D’Angelo.
Speaking to teachers in the Bayonne High School auditorium before a board meeting, D’Angelo said the union does not yet have a memorandum of agreement, which is signed by negotiating teams of both sides, and later voted on by BTA members. “I have no more to tell you because nothing that I know now is written in cement,” D’Angelo said of the uncertain terms of the tentative agreement.
Tensions still seem high within the union. Last week, William Blanchard, a math teacher at Bayonne High School, sent a letter to union members asking them to vote to impeach Alan D’Angelo at an upcoming union meeting.
The letter charged D’Angelo with working against union member interests in the 17-month negotiation for a teachers’ contract. Blanchard charged D’Angelo’s with a lack of results. In the letter, he said that demands of union members have not been met, including to maintain their current healthcare plans and not have a frozen year or added steps to the salary guide. He also alleged D’Angelo failed to follow union bylaws and accused him of acting in his own self-interest by perpetuating the negotiations for “selfish, personal, or negligent reasons.”
It is unclear whether the majority of teachers feel such disdain for the union president.
Generational conflict is at play within the union, where it seems that there’s not enough money to go around forboth younger and older teachers to get what they want. The current offer seems to benefit younger teachers, while leaving the “bubble” teachers who have been working for 15 or more years without as much of a raise as they would have liked.

One of the central issues in these contract negotiations is insurance plans. The BBOED is pushing the union to switch from NJ Direct 10 to NJ Direct 15 to save money.Employees of the City of Bayonne and many Board of Education employees throughout the state have already switched to NJ Direct 15 for this reason.
NJ Direct 15 has a 10 percent higher deductible and a $5 increase in co-pays than Direct 10.
Direct 10 has a limit on out-of-pocket expenses at $400 for an individual and $1,000 for a family for in-network, whereas the Direct 15 Plan caps coinsurance at the same cost points, but the out-of-pocket limits are much higher at $5,720 for an individual and $11,170 for a family.
It’s understandable why teachers would want to stay with their old plan, as one healthcare representative at the BBOED Workshop said, “The direct 10 is a richer plan, a better plan, you can’t say it’s not.” The board noted that a teacher would have to visit a doctor’s office 381 times in a year before reaching the maximum out-of-pocket on the NJ Direct 15 Plan.