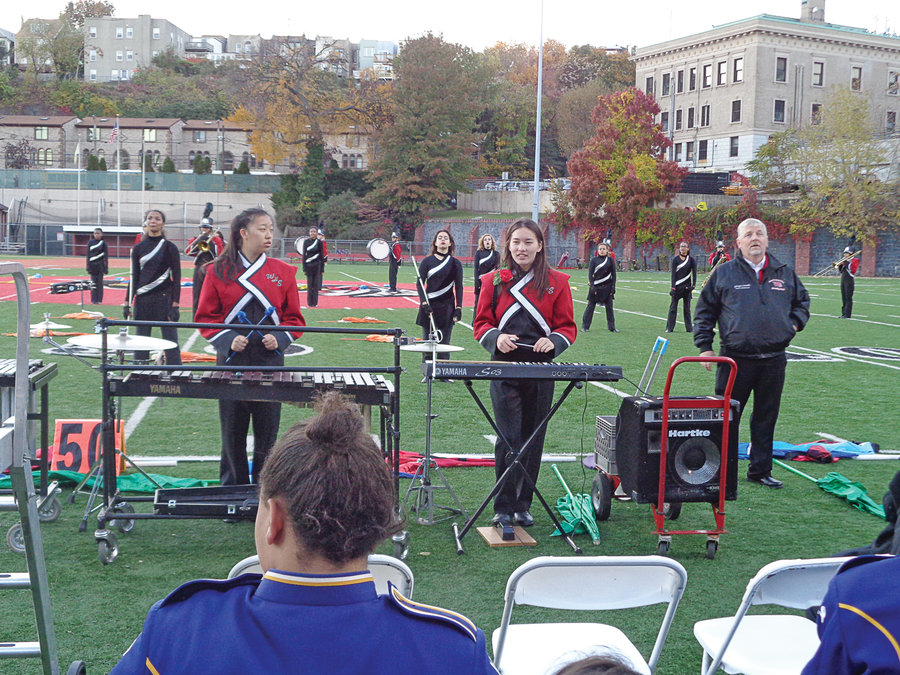 High schools came from throughout New Jersey to participate in the eighth annual Weehawken Invitational Band Festival at Weehawken Stadium on Nov. 6. The event is not a contest, but raises money for bands to travel to competitions in other parts of the country.
“I think it went really well,” said Band Director Natalie Kerr shortly after the event. “Our bake sale, which goes into a band fund for trips to Disney World every two years, was more successful than it has been in the past. We were pretty pleased with the outcome.”
Participants in the showcase came from all over northern New Jersey, including high schools in Ridgefield, Hoboken, Lyndhurst, Garfield, Becton, Cliffside Park, North Arlington, Paramus, and Elizabeth, as well as the home team.
Kerr says the festival is “kind of our way of showing off our marching program, and its main purpose is as a fundraiser to help the students” with supplies and registration for other events.
Recently the band won first place in their class in the national Tournament of Bands Atlantic Coast Championships, beating out 25 other bands for the highest score of the day.
Kerr was proud of the accomplishment.
“We had a 95.1505, and everybody else below us were like 92 and below,” she said. “It was our first year in TOB and our first major championships, so it was a pretty significant win. I don’t think that any other Weehawken bands in the past have ever competed against that many groups before.”
So after such a triumph, what’s next for the champs? Well, a little break first, Kerr says, and then an appearance at the Weehawken Christmas tree lighting. They won’t march, but will play holiday music.
From there, they will play at an annual Heisman award ceremony in New York City on Dec. 9, before transitioning into an afterschool jazz band program in January.
Essentially, the band’s “marching” duties will take a backseat to other priorities, which usually happens around this time of year.
“Really, the only other marching band things we have will be parades. Usually the St. Patrick’s Day Parade and then the Memorial Day Parade in May,” Kerr said. “The only thing the marching band really does for the rest of the year is just any kind of pep rallies we have at school or any parades that come up.”