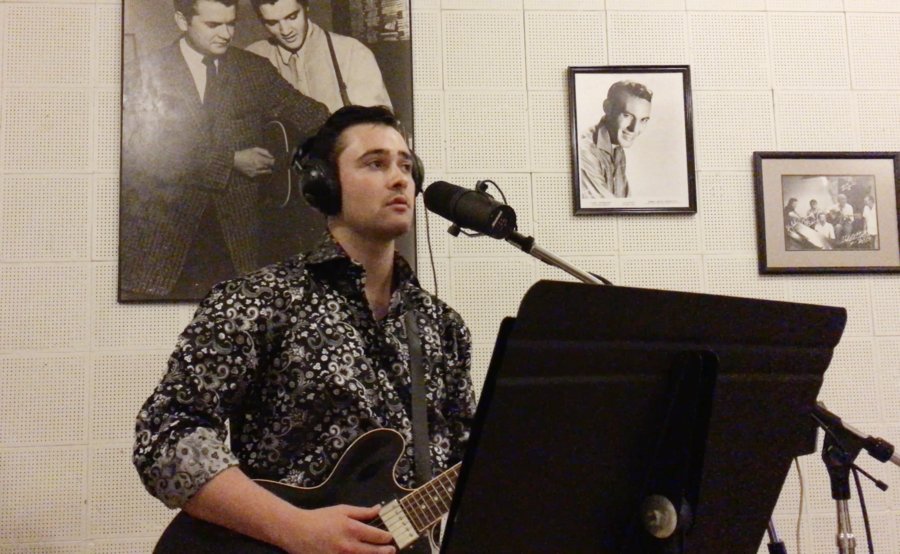 This month Jack Skuller, a 20-year-old singer-songwriter from Weehawken who attends college in Hoboken, released two holiday singles to raise funds for a charity called Holiday Express.
Holiday Express is a New Jersey-based non-profit that provides financial support, music, and food to the less fortunate during the holidays. Their more than 2,000 volunteers include 150 professional singers and musicians who visit disabled children, isolated adults, the poor, veterans, and the homeless.
Skuller, a Stevens Institute of Technology student and a graduate of Weehawken High School, is donating 10 percent of his proceeds from the music and merchandise (available on his website) to the group during this holiday season.

_____________
“It was truly electrifying.” –Jack Skuller
____________
“Their mission is to unite people and make their holiday seasons better, and I think that’s really great,” said Skuller.
He chose the charity because he likes that they are New Jersey-based like himself, and don’t support only one specific group of people.
Skuller grew up in Weehawken and began singing when he was just 8 years old after listening to his father’s CDs.
“I would play them over and over again and sing along,” said Skuller. “Music came to me without much academic[ally]. It just naturally came out of me.”
At 14 in 2010, Skuller released his first single “Love is Drum” and hasn’t stopped since. Four years later Skuller’s songwriting was recognized by the Songwriter’s Hall of Fame when they awarded him the Holly Prize in tribute to Buddy Holly.
Skuller is enjoying his life as a student of Music Technology. “It’s a great, beautiful, isolated campus,” he said. “I can go to New York City for shows, and stay in New Jersey where I’m from. Its great proximity to everything and the professors inspire me daily to work harder.”
Skuller said he enjoys seeing his family in Weehawken. He watches his younger sister play softball and his younger brother act and do standup.

Now, Skuller has released an original song, “Stuck in this Holiday,” and a cover of Floyd Dixon’s 1950s “Empty Stocking Blues” in time for the holidays.
Fans can preorder the songs on vinyl, purchase scrapbooks and photo albums made by his sister, and request live performances via Skype at www.pledgemusic.com/JackSkuller.
On Nov. 11 the Holiday song was to be digitally released on iTunes for all to download.
Skuller said he loves PledgeMusic because it allows him to interact with his supporters more so than he typically can.
“I’m excited to interact with people and I think it’s a great platform,” said Skuller. “There is no wall between me as an artist and a fan.”
Skuller said recording the music was an amazing experience as he did so in Memphis, Tenn. He recorded in the same studio as his idol, Elvis Presley.
“That was the most incredible experience, “said Skuller. “Like going to the Independence Hall of rock and roll and being able to adopt your own Constitution. It was truly electrifying. I got to stay after hours and stand where Elvis stood and do what he did.”
Skuller said he recorded after seeing the sights, including Graceland, and was “so high on the energy of the blues and the people and the area.”

Skuller said he has started a new three-piece band, The Skullers, which is much more “rock and roll” and less about “one guy.”
He said that the new band will be his primary project for 2017 and he hopes to do a January show with the group in celebration of his 21st birthday.
He said the band is still in the early stages and that he felt it was “the right time to do something collaborative.”
Finding his band mates wasn’t an arduous process but rather they instantly knew once they played together.
“Obviously I am not married, but if I had to describe it, it’s like finding the person you are supposed to get married to,” said Skuller. “You’ve got to find somebody who you get along with and something has to click, like that x factor, that missing link that has to be joined. And the only way you feel it is when you are playing together.”
For more information on Skuller go to his website at www.jackskuller.com.
Marilyn Baer can be reached at marilynb@hudsonreporter.com.