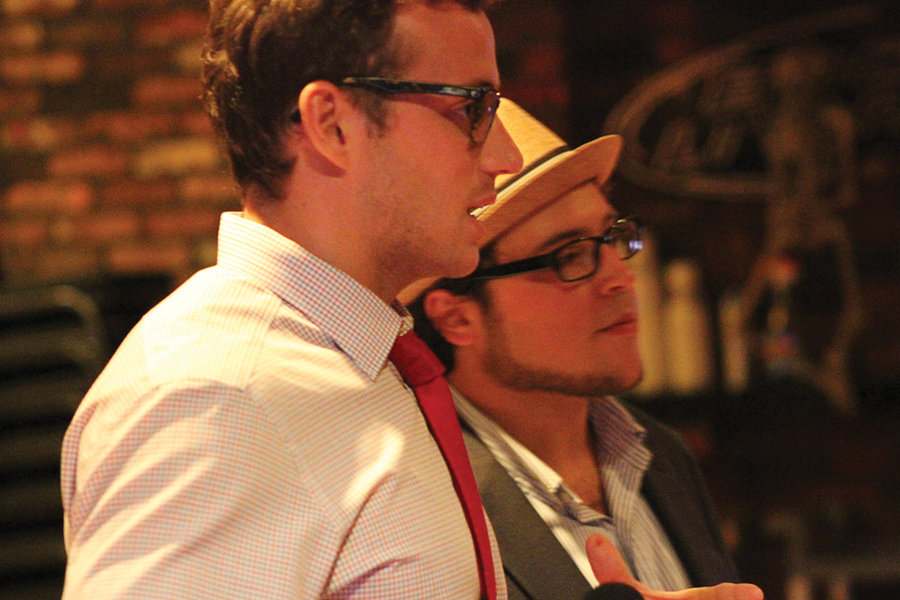 Billed as a forum about the issues, the Oct. 17 debate between the Hudson County Young Republicans and Young Democrats was raucous and fun, more like a social meetup than a political event, although among laughter and drinks some issues did get discussed.
Moderated by political writer and NewarkInc.com editor-in-chief Mark Bonamo, New Jersey’s answer to Barnum & Bailey, the event tried to follow Roberts Rules of Order. But it only marginally followed them even though Bonamo carried a big stick – or rather the gavel for Fort Lee Mayor Mark J. Sokolich (you remember, the guy who was allegedly punished by Gov. Christopher Christie’s top aides via GW Bridge closing).
Bonamo said he would not be shy in using the gavel, and did frequently, warning both sides, “Let’s keep this polite, whether you are left or right.”
Although touted as an event for the organizations to “square off,” the affair – although not always under control – tended to be more of a sparring match, hardly the stuff generated by the national campaign.
The two groups barely mentioned the presidential candidates, Republican Donald Trump or Democrat Hillary Clinton, sticking mostly to the script set out by Bonamo that focused primarily on philosophy and policy, rather than rhetoric.
With alcohol flowing freely, the event was thick with jeers and cheers, and may have resembled some of the political gatherings of nation’s forefathers who discussed issues in pubs.

Bonamo focused the debate on issues such as the use of bathrooms by transgender people, a reference largely to a North Carolina law outlawing transgender choice of facilities.
Other issues including $15 per hour minimum wage that Democrats are proposing nationwide, the war in Syria, and the Affordable Care Act known as Obamacare.
Each group was represented by two members. Brian Platt, of Jersey City, the founding member of the Hudson County Young Democrats, was accompanied by an extremely well-informed Katie Brennan. The Young Republicans were represented by Joshua Sotomayor-Einstein of Hoboken and Evan Lazerowitz, nearly equally articulate and informed as Brennan.

_____________
“Our two parties have very different fundamental visions for the direction of the country, whether it is foreign policy or economics.” – Evan Lazerowitz
____________
Sotomayor-Einstein said he actually started out liberal and slowly came to realize that there was not as much diversity on the left as on the right, and that he came to believe in many of the core GOP issues.
He said he saw diversity in the pages of Republican publications, some of which even disagreed with the mainstream Republican doctrine.
“The ability to tolerate descent attracted me,” he said. “Our country is faced with myriad problems” including illegal immigration. “But I agree with classic liberalism that we can disagree with each other without being disagreeable, that we can have the discussion about what’s the best policy with you trying to take my stuff and without me trying to take your stuff.”
Evan Lazerowitz, an attorney, said he’s lived in Hoboken for about two years, and said the GOP had a better handle on a number of issues such as limited the role of government in interfering with private lives and the questionable successes of Obamacare.
“This election makes us face a very stark choice,” he said. “Our two parties have very different fundamental visions for the direction of the country, whether it is foreign policy or economics. But it boils down to a question: do you believe in individual responsibility.”
Or, he added, do you believe that every problem people face must involve the government even more?
“What is our role in the world?” he asked. “Are we the leader, or do we let the UN take the driver’s seat, and allow instability to flood through the world, whether it is in Syria or Russia, or China.”
Platt said among the goals of Young Democrats is to increase civic activism and engage more people in the political process.
“What we were seeing was a distain and general apathy for getting involved and understanding what’s really going on,” Platt said. “In truth these issues affect us all. No matter who you vote for or if you vote or not, after the election, the issues are still there.”
They successfully registered over 1,000 new voters throughout Hudson County and northern New Jersey in 2016 this year.
Brennan, who lives in Jersey City, works for Hudson County helping to manage affordable housing programs and is involved in a non-partisan program for entrepreneurs.

The program included six pre-selected questions on prominent issues as well as several questions raised by the audience.
Syria became the first area of conflict between the two groups. While Platt laid out the basic history of the conflict in that country, saying it was as complicated issue, some of the facts were wrong, such as claiming Russia was on the same side as ISIS in some of the conflicts there. The young Democrats promoted Democratic presidential candidate Hillary Clinton’s call for a no-fly zone and push for UN peace talks to help unravel the complex situation.
“What we just heard is the classic Democratic line we’ve heard over the last eight years, that there is no answer, there’s nothing we can do,” said Sotomayor-Einstein in his rebuttal. “[They say] that we need to sit down and talk to people who have a vested interest that are opposed to ours, and somehow if we talk to them nicely everybody is going to walk away with a kumbaya moment. That’s not the real world. What we’ve had for the last eight years as been American abandonment of its place in the world.” He said Russia has become more influential because America has been retreating from the world.

On gender distinctions in bathrooms, the Republicans said it is their position that people should have a choice as to whether to provide separate facilities for transgender people or some other accommodation, and not have that choice imposed by government legislation.
The Democrats argued that this is a matter of discrimination, not radically different from Jim Crow laws that were passed to limit the rights of African Americans
On establishing a $15 minimum wage in a few years, both sides agreed that there historically has never been an increase of this magnitude and that the impact is largely theoretical. Brennan, however, speaking for the Democrats, said cases where there has been an increase in minimum wage showed an improvement in the local economy,
Lazerowitz, for the Republicans, argued that the impact on businesses isn’t just the increase in wage, but also in payroll taxes and other expenses.
“So essentially you’re increasing the cost per worker to $18,” he said.
This leads to possibly hiring fewer people or more people as part-time workers that would not be covered the by law, and so would increase the number of people unemployed
As for Obamacare, both sides agree the health care program has not worked as expected. Democrats, however, said the program needs to be tweaked, the Republicans said it needs to be scrapped.
Al Sullivan may be reached at asullivan@hudsonreporter.com.