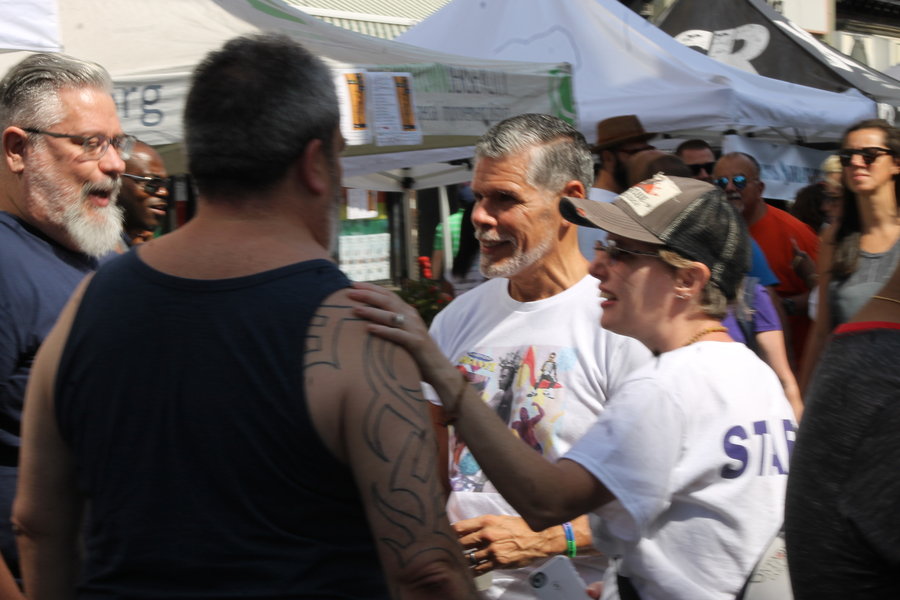 You didn’t have to be gay to attend this year’s LGBT Pride Festival in Jersey City; in fact, it is likely of the estimated nearly 10,000 people who did attend most likely weren’t.

“It was an awesome show of the community’s diversity,” said Assemblyman Nicholas Chiaravalloti, who was among the numerous public officials to pay a visit to the Newark Avenue pedestrian mall last month.

Singers, dancers, and high-wire acts created a sense elation and solidarity in a tough year that has seen tragic events affecting the gay community. Contrary to the somber mood of the memorial service held at this same location two months ago after the night club shootings in Orlando, the annual pride festival in Jersey City was a testimony to the community’s resilience, a defiant insistence on love and joy to overcome hatred.

Filled with color, sound and good food, the 16th annual LGBT pride festival provided a platform for every kind of expression and many people took advantage, dressing up for the occasion in order to see and be seen.

Jersey City has been rated by the Human Rights Campaign as the top city in New Jersey for LGBT inclusiveness.

“As always, another great Pride event downtown,” said Councilwoman Candice Osborne.  “It is wonderful to have so many families out celebrating Jersey City’s LGBT community.”

Gayborhood Jersey City and Humanity Pride Productions co-hosted the event with the aim of bringing the community closer together. But always in the background was the fresh memory of the victims of the Pulse nightclub shooting in June.

An extremely proud Eddie Baez, co-organizer of the event, moved through the crowd grinning at everybody, shaking hands with officials and members of the community.

The festival was the conclusion of a week-long series of events that started with the ceremonial pride flag raising outside Jersey City City Hall on Aug. 18. The festival  featured live performances, vendors and celebrations.

The event included performances on two stages this year as well as featuring many more vendors that in the past.

“We tried to make it so that the food vendors for the festival did not compete with the establishments that exist on the plaza,” Baez said.

Many of the local businesses got into the act, increasing their street-side presence with additional seating so that the festival seemed larger and offered more than ever before.

“This is amazing,” said Councilman John Hallenan, who was touring a number of cultural events that were taking place around the city.

Al Sullivan may be reached at asullivan@hudsonreporter.com