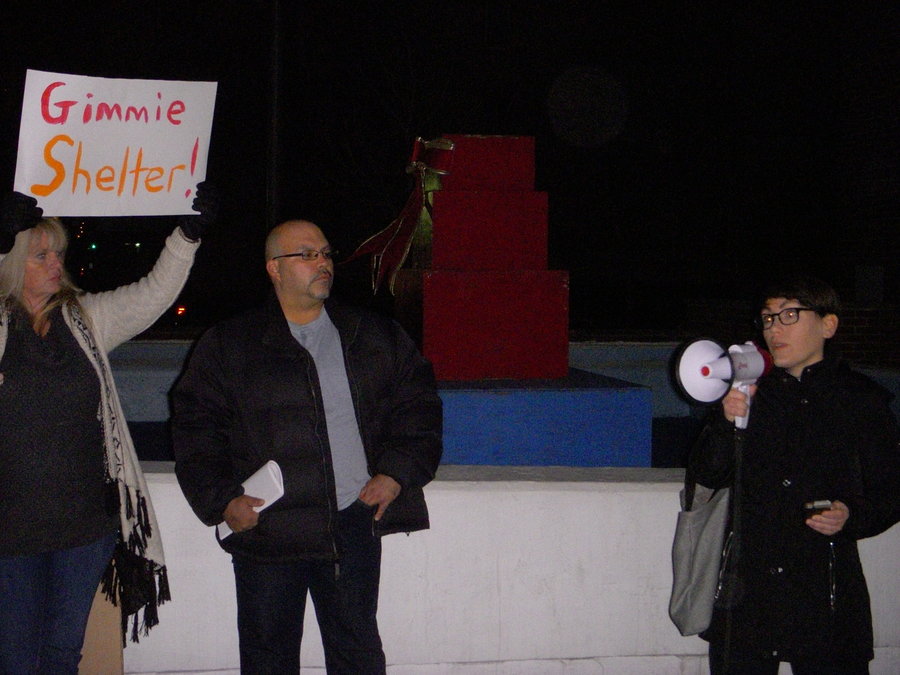 Bayonne residents unhappy with the new animal-control company hired by the city in November have joined together, posting a petition, calling the administration, and holding a protest outside City Hall prior to the Dec. 16 City Council meeting. At the protest, about two to three dozen people carried signs and listened to speakers.
City officials said in November that a problem with nuisance wildlife, particularly in the downtown area, necessitated the switch from Liberty Humane Society of Jersey City to New Jersey Animal Control and Rescue of Lodi for $87,500 for one year, which began Dec. 1.
Liberty Humane has had a $93,000 annual contract since 2014. It’s two-year agreement runs until April.
The city made the change after publishing a request for proposals for a new company whose services would include dealing with Bayonne’s nuisance wildlife. New Jersey Animal Control was the lone responder to the RFP, but Liberty Humane said it did not know about it.
Liberty Humane Executive Director Irene Borngraeber said her company does not provide the wildlife service because it follows state best practices of not removing wildlife, unless it is injured, sick, or dangerous. She questioned where New Jersey Animal Control would bring healthy and non-dangerous wildlife, because there would be no place for them.
“No wildlife rehabilitators will take these,” Borngraeber said.
“Nuisance” wildlife refers only to those that cause property damage, according to Borngraeber, so if an animal of this type is identified, a resident would have to call a pest control company to pick it up. At that point, there would be only two choices; to humanely euthanize the animal, likely with injection, or release it back into its natural habitat within a mile of where it was captured.

City officials said the change was a cost-saving measure, but critics say the new contract saves Bayonne only $5,500 a year.
They say Liberty Humane answered 400 calls over the last year and a half, held a low-cost spay/neutering clinic, and resolved four cases of hoarding.
Several people at the council meeting questioned why the city switched providers at its Nov. 10 meeting without apprising Liberty Humane in advance.
“It was an absolute shock,” Borngraeber said. “I had no idea that the city would terminate our contract a little more than halfway through.”
Several advocates and animal-control professionals questioned whether New Jersey Animal Control was the best choice since the shelter it uses, Bergen County Protection and Rescue is in Cliffside Park. Liberty Humane’s facility is in Jersey City.
Speakers also questioned the record of New Jersey Animal Control head Geoff Santini, citing news reports of an investigation into the practices of the North Jersey Humane Society shelter in Bloomfield. Bayonne animals would be taken to Bergen County Protection and Rescue shelter if found or injured.
Multiple speakers questioned whether that facility could handle all the animals brought there by Santini, who they say has animal-control contracts with nine municipalities.
Speakers said that Bergen County Protection and Rescue can house about 45 dogs and a similar number of cats.
Animal-rights advocate Peter Franco said he had spoken with Bayonne Corporation Counsel Jay Coffey and confirmed with him that Santini’s company had not submitted all the paperwork for the contract, including proof of liability and workers’ compensation insurance.
Third Ward Councilman Gary La Pelusa has misgivings about his former yes vote. He said he visited New Jersey Animal Control’s Lodi site, and now would like the agreement with Santini’s company rescinded. He said there were no markings on the building identifying the company. He also said he was shown a picture of the Bergen County Protection and Rescue shelter, and he couldn’t understand how nine municipalities’ animals could be housed at a facility that size.

“It was an absolute shock. I had no idea that the city would terminate our contract a little more than halfway through.” – Irene Borngraeber
____________

Paul Swibinski, Santini’s public relations representative, said his client is a pet lover, and that the welfare of the animals is his main concern.
Santini has been a certified animal-control officer since 1993, and an animal cruelty investigator since, 2011, according to Swibinski.
He also said Santini had never been cited for violations relating to his municipal animal control work.
“When he worked with Bayonne in the past, he never had a single complaint about him from the health department,” Swibinski said. “There’s no reason to question Geoff’s commitment.”
Swibinski addressed the council meeting, but was jeered during his talk. Santini attended but did not speak.
Swibinski said that Santini is working to open a New Jersey Humane Society shelter in West New York. He is a member of the board.
Others have questioned why the city would bring back Santini after his previous company was replaced by Liberty Humane in 2014, under the administration of Mayor Mark Smith. Mayor Smith apparently acted because animal advocates opposed Santini’s company back then.