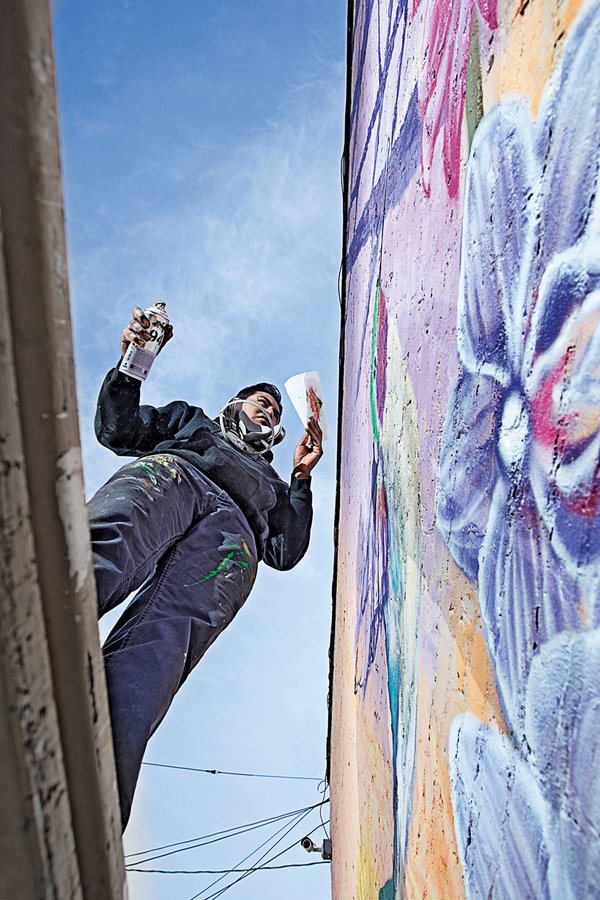 Nestor Lenin Uraga is painting the town red—and purple, orange, green, and shades of black and white.
The first time Uraga picked up a can of spray paint, he was a teenager doing graffiti in his home country of Mexico.
“I started when I was only 14 years old,” he says. “I got into trouble a couple of times, because people don’t really like when you do graffiti on their property, so I started to ask for permission.”
When he no longer had to look over his shoulder, his art began to improve.
“I was getting better because I had more time to prepare, mix the colors, and create the designs,” he says.
Soon building owners in Mexico were seeking him out to paint murals. He created designs for store owners and did work for private residents.
Uraga moved to the United States at age 19. He felt isolated until he started working in the restaurant business and met Spanish-speaking coworkers. But he realized that spending time exclusively with other Spanish speakers wouldn’t push him to learn English and get his art out there.
He took a job at Broadway Diner and the Chandelier; today he expresses himself perfectly, and is especially eloquent when he talks about art.

While working at the diner, Uraga met artist Fernando Fernandez, with whom he collaborated on art projects. From Fernandez, he learned about painting on canvas with mediums beyond spray paint.
“It is very good for Bayonne to have a couple of Nestor murals,” Fernandez says.
Uraga’s first mural in the U.S. was of an Aztec princess inside the dressing room of Classic Skate Shop on Broadway. Owner Gary Iannitelli has also commissioned Uraga murals at The Bridge Skatepark, in his own home, and behind the register at the shop.
“I feel like the art popping up around town is beautiful and brings a new young image to our town,” he says.
Uraga also has painted murals at El Aguila Dorada, a Mexican restaurant on Broadway and 38th Street.

In 2011 Fernandez opened an art gallery called Ferdez near the Broadway Diner. Though the gallery didn’t flourish, Uraga says. “The art community in Bayonne started to bloom.”
Fernandez is now slated to do a mural in Bergen Point.
A volunteer community group called Beautify Bayonne is working with NJ Transit to cover up the old Burger King sign on the overpass that spans Broadway at West Eighth Street.
“It will brighten up the entry to historic Bergen Point under the trestle,” says group cofounder and local real estate agent Chris Piechocki. “This area of Broadway is in the midst of a re-gentrification and great things are happening.”
Tracy D’Alessandro owns a full-service flower shop called Angela’s Mum on 34th Street just off of Broadway. Uraga’s work has brought all the floral beauty from the inside of the shop to the outside.
“Customers tell me they purposely go up 34th Street, out of the way, to see the mural because it makes them smile,” D’Alessandro says. “Can you imagine if every block you turn up can make you smile?”
D’Alessandro credits Jack Smith Attorney at Law, the building owner, for his consent and forward thinking. “Let’s paint the town happy,” she says.

Uraga’s latest project, a painting of Chuck Wepner in honor of the 40th anniversary of his 15-round fight against Muhammad Ali, is done on parachute canvas. Affixed to the side of the health food restaurant Andrew’s Project on Broadway, it towers over 33rd Street.
Uraga and Nicholas Macchia were lead artists, heading a team of volunteers. The two had worked as volunteers on a 16th Street Park mural, painted by an artist known as LNY.
“I didn’t realize it would be as big and imposing as it is,” Wepner says. “It’s three stories high. It was surreal.”
Mayor Jimmy Davis agrees.
“All murals can tell a story, and I think that every city has a story to tell, especially Bayonne,” he says. “Bayonne is very rich in tradition and in its history.”
Community Development Manager Samantha Howard headed the project. “Hopefully this mural will fuel the art community in Bayonne to get involved in or start future art endeavors.”
Throughout the process, Howard tracked the progress of the mural. “It started off as a flat outline and rather quickly, layer upon layer of detail and color were added,” she says. “It was an amazing transformation to watch.”
Keep your eyes open while you walk around Bayonne. You might find a sight for sore eyes.—BLP