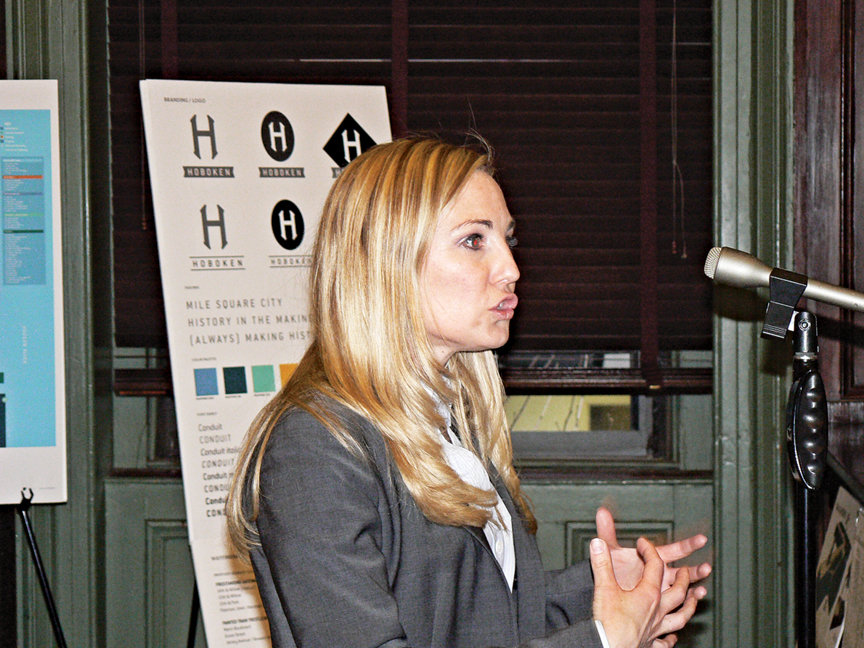 They aren’t as high profile as the Southwest Park or as complex as the Washington Street redesign, but the pedestrian improvements city contractors have developed for First Street’s busiest corridor promise to be just as visually striking, and potentially completed sooner than those other projects.
On Wednesday, April 15, representatives from T&M Associates and their sub-contractor M Studio presented their concepts for the sidewalks of First Street to the City Council. Along with a proposed plan for new branded wayfinding signage around the city, the improvements make up the “Hoboken Post-Sandy Commercial Revitalization Project.”
Because they are funded through a $799,455 grant to the city from the New Jersey Economic Development Authority, the firms are working on an accelerated schedule, aiming to begin construction on First Street in July and finish it in December.
When the project is completed, the most noticeable features on First Street will be an abundance of new street trees, flowers and plants and curb extensions that reduce the distance pedestrians have to walk to cross the street.

_____________
“You get that nice vegetation…and then for the winter months, you have a place to store the snow.” – Brian Leff
____________
In conjunction with the Hoboken Shade Tree Commission, T&M Associates selected hearty varieties of willow oak, linden, and other tree types to line First Street. According to T&M landscape architect Brian Leff, the selections are all known to be urban-tolerant and native to northern New Jersey and will not require additional watering after the first two years.
They are also medium-sized, happy to live in the space between pedestrians and power lines. T&M hopes to plant the trees in a special mix of gravel and soil that doesn’t compress, allowing their roots greater access to air and water. “That keeps the roots from growing into the sidewalk,” said Leff. “When the roots are lifting up the sidewalk, what’s happening is that the roots are looking for water and they’re looking for air.”
The curb extensions or ‘bulb outs’ are designed to occupy previously restricted ‘No Parking’ areas and not inhibit turn movements on and off First Street.
The EDA money will also pay for two rain gardens along First Street, though the number of rain gardens could be doubled in subsequent construction contracts, according to T&M engineer Jaclyn Flor. By absorbing rain and storm water runoff, the gardens will tie into Hoboken’s comprehensive flood mitigation strategy.
Other improvements slated for inclusion in the First Street project include painted ‘sharrows’ reminding cars to share the road with bicycles, Americans with Disabilities Act-compliant ramps, and ground level perennial plants that die back every fall.
“Eight months out of the year,” said Leff, “you get that nice vegetation, nice color, and then for the winter months, you have a place to store the snow.”

T&M also presented their ideas for new wayfinding signs to be placed at regular intervals throughout the city. The signage may include pedestrian kiosks with walking maps, gateway signs, and directional blades pointing drivers to parking or local landmarks.
“The goal of this project was to create a comprehensive and consistent system of wayfinding for the city,” said T&M representative Mike Manzella. “In order to do that…[we] went through a branding exercise for what kind of color palette, font types, marks should the wayfinding have.”
The branding campaign caught some flak on social media and in letters to The Hoboken Reporter for seemingly treating Hoboken like a new flavor of Doritos in need of marketing, but in the end, the proposed branding draws heavily on Hoboken’s established icons and taglines, seeking mainly to expand their reach through the wayfinding signs.
According to representatives from M Studio, which led the wayfinding planning process, the stakeholders, survey-takers, and focus group members who provided input for the project overwhelmingly wanted to maintain rather than overhaul Hoboken’s current brand, such as it is.
For example, when developing a logo to be used on wayfinding signs, M Studio Communications Coordinator Alicia Collura said respondents preferred an unadorned version of the H that can be found on poles in the Hoboken PATH station. “The community felt that it is a recognizable symbol of Hoboken and…can be moved from the PATH station, taken away from there, and still stand for Hoboken,” said Collura.
Similarly, according to M Studio Creative Director Jenna Zilincar, only one member of the 50-person focus group convened for the project voted for a city tagline other than “Mile Square City” (the other suggested options were “History in the Making” and “(Always) Making History”).
Even the colors proposed to delineate different types of signage were specially chosen to evoke historic landmarks or iconic locales of Hoboken. “We have some nice blue that hints at the waterfront,” said Collura, “a green that sort of references the patina of the clock tower in Lackawanna station, a brick red-orange to go with the more historical feel of the city…”

Some relief for local taxis

After months of pleas at public meetings, the City Council granted a measure of relief to local taxi operators suffering under intense competition from ridesharing apps Uber and Lyft. On April 15, an ordinance reducing the amount of insurance taxi companies operating in Hoboken are required to buy for their vehicles was passed unanimously by the City Council.
“Some of the taxi drivers were having issues getting insurance because of the requirements that we had, which were substantially greater than other communities’,” said Councilwoman Jennifer Giattino. She said the ordinance would bring Hoboken in line with the standard rates required in other municipalities.
Under the new regulations, each Hoboken taxi is required to have a liability insurance policy with either a combined single limit of $100,000 or split insurance limits of $25,000 per person and $50,000 per accident for bodily injury and death, and $15,000 for property damage.