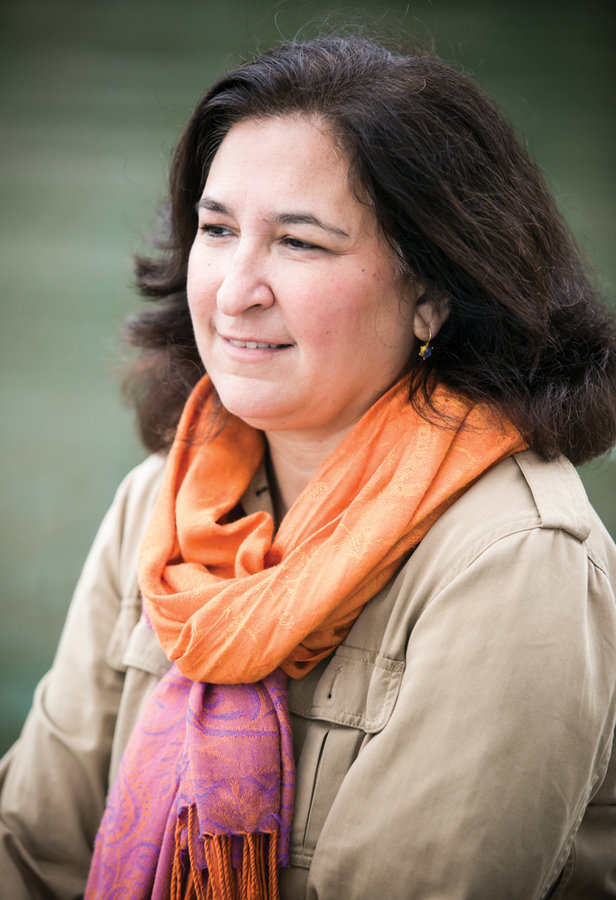 When I met author and former resident Helene Stapinski in Liberty State Park, she was about to tour the waterfront with Director Steven Fischler and Director of Photography John Miglietta. The crew had assembled to shoot footage of Jersey City from the Hudson River for the documentary Five-Finger Discount: A Crooked Family History, which is based on Stapinski’s bestselling 2001 book by the same name.
“It just seems like the next step for the book,” says Stapinski, who is very involved in the documentary as a writer and producer. “The documentary is taking it to another level.”
The film will offer a new visual journey of the political history of Jersey City as seen through the eyes of Stapinski and through the lens of her family’s experiences.
Stapinski says that the documentary has become its own creature now, in part because of how much Jersey City has changed since Five-Finger Discount hit the stands almost 13 years ago.
“It is not just the book being thrown into the film,” she says. “The places that I grew up in aren’t ugly anymore. It is hard to find an ugly street downtown … now it is prime real estate.”

Evolution of an Author

In her memoir, Stapinski explores how crime and political corruption influenced regular citizens throughout Jersey City, including several family members, who stole, gambled, and committed murder. While Stapinski has received overwhelming support for the documentary, her book managed to stir up negative reactions from some longtime residents who felt it painted the city in too harsh a light.
“It’s almost like I am not the same person who wrote the book,” Stapinski says. When she’s gone back to reread it, she says, “I forgot how sad it was …wow, I was in a bad place … I am really not that person anymore. I’ve evolved in a lot of ways.”
Stapinski currently lives in Brooklyn with her husband and two children and frequently writes for the New York Times.
She recalls that she harbored hatred toward her grandfather, “Beansie,” most of her life. “He almost killed us,” she says, “but as you get older you understand things a little bit better. … As you get older you get a little more compassionate.”

Beansie experienced the oppressive rule of Mayor Frank Hague from 1917 to 1947. Stapinski writes in her memoir that Beansie was arrested for armed robbery, did time in Trenton for murder, and was known to be a bully and a thief. It was around the time that Stapinski was five years old in 1970 that Beansie attempted to murder her family.
“It is tough to look at this stuff and to go through it again,” Stapinski says. “I kind of exorcized it and now I am back in it.”
Stapinski provides first-person narration for the documentary and returns to a number of sites that helped shape and define her childhood—a bittersweet experience.
“It is just weird when places aren’t there,” Stapinski says. She recently stood in front of the building on Montgomery Street that once housed the Division of Motor Vehicles where her mother worked and where Stapinski and her friends played in the backyard.
“Just being there and looking in the window, you are just reliving it again and again,” she says.

The documentary moves beyond the book and includes still photographs, home movies, vérité footage, and stories that aren’t in the book.
“There are all of these things I came across since the book came out,” Stapinski says.
“We have footage of Beansie walking my mother in to church on her wedding day. You can actually see him moving.” Stapinski says that including such footage and photos gives people a little extra detail, especially those who complained that there weren’t enough pictures in the book. Her mother recently gave her a bunch of pictures of a relative named Kunegunda. Originally from Poland, Kunegunda married Stapinski’s Uncle Andrew and ran a tavern on Pacific Avenue during the 1930s.
Just like the DMV, that tavern is long gone and in its place is a hairdresser. The Bergen-Lafayette area where the tavern was located is undergoing change with new development, as are other parts of Jersey City. When the crew went to shoot footage at the site of Kunegunda’s bar, Stapinski learned that many of the hairdresser’s customers have had to move out because of rising rents.
“The Jersey City I grew up in is quickly disappearing, for better or worse,” Stapinski says. “That is part of the documentary now … that this place is no longer the same.”

Bringing the Past to the Present

“Part of the whole documentary process is trying to recreate a picture of a world that really doesn’t exist anymore,” says Fischler, who was brought on as the director and a producer a year ago. He has known the Executive Producers Roseanne DeLuca Braun and Charles Hobson for a number of years.
“It is kind of an archeological dig,” Fischler says. “Cities don’t remain static, they change. … Jersey City is heralding its reawakening.”
Fischler was drawn to the project for a number of reasons including his appreciation for the book and his love for Stapinki’s voice—her wry sense of humor and sarcasm.
“I hope people will get to know her through the course of the film,” he says.
As someone who grew up in Brooklyn and lives in Teaneck, Fischler has always been fascinated by the complexity of urban corruption. Through his work with Pacific Street Films, which he helped found in 1971, Fischler says he has worked on films that tell undiscovered stories or cover important aspects of history that have fallen through the cracks.
“That is also true about Jersey City,” Fischler says. “It will be interesting to explore the history in a little bit more detail … doing it through one person, one family.”
Stapinski has received an overwhelmingly positive reaction to the documentary; Mayor Steven Fulop has been very supportive of the project, as have immediate family members, including her mother, who will be featured in the film.
According to Fischler, WNET has shown interest in airing the documentary. He hopes that it will be screened at film festivals and a variety of other venues. They plan to complete the documentary by next year.
In the meantime, the producers hired a researcher and finished a Kickstarter campaign. To donate, go to fivefingerdiscountfilm.com
“I thought this story was told,” Stapinski says. “But it is not done by a long shot.”—JCM