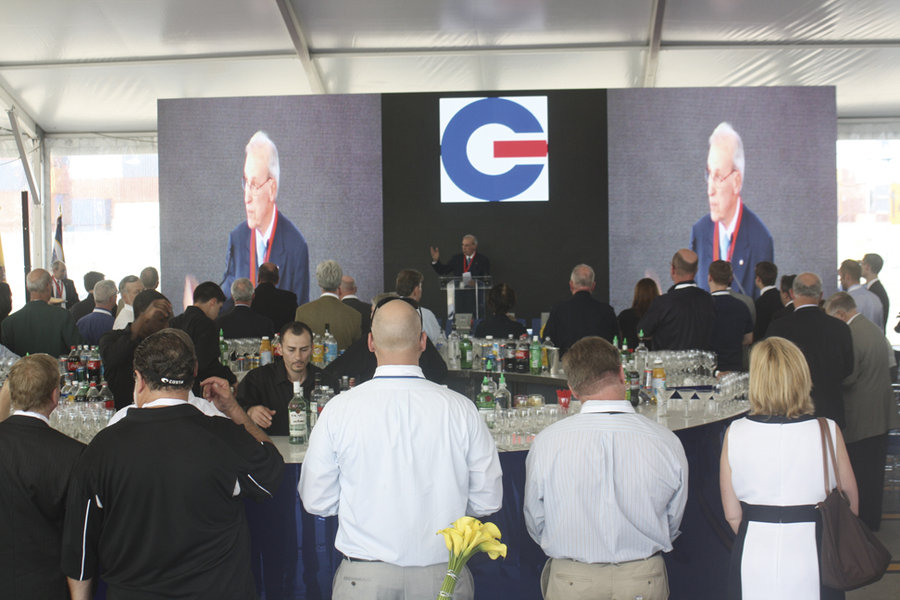 Global Terminals held a party to celebrate the grand opening of its $325 million expanded container port facility in lower Jersey City on June 18. Wine bottle corks popped. Food was served. Men came dressed as if for a prom. Women wore their best evening gowns.
But when the hip hop music started, it was the terminal machinery that did the dancing.
In a demonstration of the versatility of the mostly automatic facility, the vast machines lifted large containers in a choreographed routine as the audience made up of port workers, political figures, Global staff and other invited guests applauded in amazement.
The vast cranes ended the routine by hoisting two huge American and Canadian flags symbolizing the joint effort of the American and Canadian companies that helped bring the project to fruition. Global is owned by the Ontario Teachers’ Pension Plan.
Although originally conceived in April 2008, the project began construction in 2010 funded by a federal grant, and is expected to increase safety and efficiency while reducing truck and other emissions typical of a more conventional container port operation.

A marriage of technology and heavy machinery

Although the vast cranes that danced before the audience’s eyes during this opening demonstration were choreographed to show how they can work together, in real time each crane would be programmed to perform individual tasks. The automation of crane operations allows the terminal to move than double the number of “lifts” from previous operations.
Officials said the whole operation for unloading a ship will be four hours shorter on average. Because the waterbed has been dredged to 50 feet deep, ships no longer have to take into account the impact of tides. Global also comes on line two years earlier than the raising of the Bayonne Bridge, making it the first port that can handle the new larger ships expected to arrive in the area shortly.
This is the first semi-automated terminal in the New Jersey/New York Harbor. It is only one of five terminals in New York Harbor that can be accessed without going under the Bayonne Bridge, according to Jim Devine, president of Global Terminal.
Many of the operations, such as the gantries, are now electric rather than petro-driven, reducing emissions.
While many of the operations are automated, Devine said, longshoremen handle the loading onto trucks which exit the terminal through a modernized gate system. The facility also has a container-to-rail operation. This will reduce traffic on local roadways, despite the increased volume of containers, officials said.
Local officials from Jersey City and Bayonne attended the event, including Bayonne Council President Terrance Ruane and Assemblyman Charles Mainor.