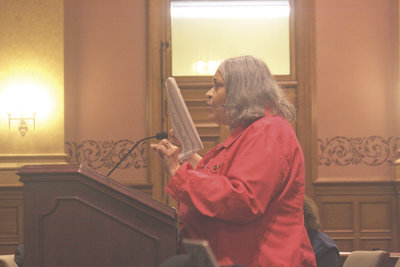 Nearly everybody who spoke at the City Council meeting on Wednesday said the loved the Silverman brothers, who want to develop a luxury rental project at 272 Grove St., but hate the idea of tax abatements.
Despite their objections, the City Council approved a 10-year tax abatement for a project that was originally proposed as a for-sale condo project.
The ordinance, which the council passed by an 8-1 vote, granted 272 Grove St. Urban Renewal LLC approval to switch from a condominium project to a market rate rental, increasing the number of total units from 88 to 99 but reducing the number of parking spaces to 46.
Called the Majestic II Redevelopment Project, the two-building development located at Montgomery, Grove, and York streets has also expanded its retail space from 8,500 to 20,000 square feet. Currently on the block are an empty storefront (formerly a deli and a carpet store), a church that closed recently, and several apartment buildings with empty lots beside them.
The project has been proposed by Eric and Paul Silverman, who previously turned the nearby historic Majestic Theater into condominiums.
While some residents objected to the reduction in parking and the increase in the number of apartments and expanded retail space, the tax abatement drew the most criticism. Speaker after speaker spoke out against giving an abatement for property that located in one of the hottest real estate markets in the nation.

Some residents believed that Mayor Steven Fulop and his council mates had run their campaign last year to abolish abatements.
But Councilwoman Candice Osborne said this was not true.
“We didn’t run to do away with abatements,” Osborne said, after she listened to several residents quote her campaign statements. “We said we would make abatements more efficient.”
The intent was to get more developers to build projects in locations other than along the Jersey City waterfront by offering greater incentives to build in other parts of the city.

_____________
“You’re hurting the golden goose.” – Yvonne Balcer
____________
Abatements allow developers to pay fixed amounts in lieu of taxes that they would otherwise pay, and usually don’t include school and county taxes, a shortfall other taxpayers must make up for. The abatement program in the city allows a five-year abatement for nearly anyone seeking to redevelop. Payments are phased in over five years until the property is at full taxed value by the fifth year. In other areas, such as where the Silvermans have their project in Grove Street, the city is setting a maximum abatement of 10 years.
The original Silverman request, Osborne noted, was for 20 years, and the city negotiated it down to 10 years and also got other concessions from the Silvermans.
In neighborhoods such as Journal Square and other parts of the city where redevelopment has either stalled or never taken place, the city is offering longer abatements, she said.
Councilman Michael Yun said while he did not believe the abatement on the Grove Street property was necessary, he conceded that it was much better deal that originally proposed. Still he was the lone vote against the abatement.

Impact on quality of life for other residents

Yvonne Balcer, a resident of the Van Vorst Park area, said the project would have too much of an impact on an area already struggling to provide parking.
“You’re hurting the golden goose,” she said. “Ninety-nine units are too much for the area. This should be half the size.”
She said the reduction of parking spaces would force residents to seek parking on streets which currently are overcrowded.
“I like this developer,” she said. “But there is no need for an abatement.”
The current site generates about $74,659 in annual taxes. Under the new agreement, which some council members think underestimates the rental revenues, the city would receive about $367,689 annually. Full taxes would be about $640,000 without the abatement.
The developer will also pay about $189,000 in three installments of about $63,000 each to meet its affordable housing obligation.
Fletcher Gensamer was particularly critical of abatements, and has opposed others in the past, and was critical of a number of changes in this agreement such as doing away with on-site affordable housing units.
“This ordinance is different, very different,” he said. “And should this ordinance pass, this will set a very bad precedent, which any developer can simply weasel their way out of the agreements they make with the city at any time, for any reason.
“We’ve seen this happen in the past, with developers not including affordable housing units into downtown high-rise developments, and it needs to stop. This council needs to say ‘no’ and show some backbone, making developers keep their agreements that they enter into with Jersey City.”
He said the abatement should be for five years and no longer, since the Grove Street area is an extremely trendy area.
“Look where the Majestic 2 is going to be built,” he said, “right by the epicenter of Hipster Land downtown, and smack dab in the heart of Yuppieville. Everything is walkable, and with the Grove Street PATH right there, there is no reason a tax abatement is needed in this location.”
He also questioned some of the estimates of income, upon which the abatement payments are based, believing that they are too low.
“The result of this new ordinance will be more apartments, and more retail with less parking,” he said. “This all equals more congestion, and is not fair to regular residents who live downtown who must fight to find parking on the streets on a nightly basis.”
Former Deputy Mayor Kabili Tayari said he also liked the Silvermans, but said that he was concerned with the changes in the project.
Several council members pointed out that the property has been vacant for years and that the project will benefit the neighborhood, as other projects by the Silvermans have.
Councilwoman Joyce Watterman said the council did reject the original abatement request and that the Silvermans have a good record.
Council President Rolando Lavarro also voted to approve the project.
“This agreement is better than the previous agreement,” he said. “I understand the residents’ concerns and I struggled with this one. We want to direct abatements to other parts of the city.”
But this project will bring in revenue to the city, payments to affordable housing, construction and other jobs.
Eric Silverman said later, “We’re excited to begin the project. We feel it will be an immense asset to the area, adding several local stores to the vibrant small business community near Montgomery and Grove Streets and adding sorely needed ratables to the Jersey City tax base.”