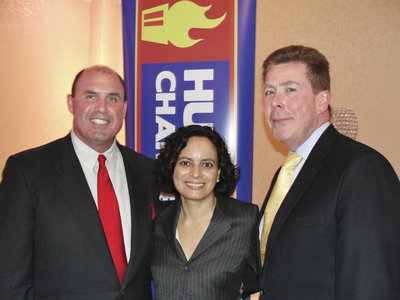 Exactly five years after US Airways Flight 1549 hit a flock of geese and lost engine power, forcing the pilot to execute a spectacular emergency landing in the river, crash survivor Dave Sanderson stood before a group of Hudson County merchants to relate his experience as the last man out of the plane.
This past Wednesday’s talk was presented by the Hudson County Chamber of Commerce in collaboration with Palisades Medical Center in North Bergen, where Sanderson was treated after being rescued. A packed room of spectators at The Waterside Restaurant in North Bergen listened raptly as Sanderson spoke about the events of Jan. 15, 2009.
It was a chilly winter day when the plane full of 155 passengers and crew took off from LaGuardia Airport and within minutes lost all power. The pilot, Capt. Chesley “Sully”’ Sullenberger, made the unprecedented decision to attempt a ditch landing in the Hudson River.
Sanderson vividly described the eerily silent plane gliding over the George Washington Bridge and the impact as it hit the water, then the flurry of activity as passengers evacuated the interior while frigid water quickly filled the cabin.

_____________
“Just going through that whole experience, coming out the other end, it is kind of miraculous.” –Corrine Statia
____________
Rather than rush out, Sanderson helped others escape, becoming the last person to exit the plane. Once he reached the exterior, the wings were crowded with passengers waiting for pickup by the swarm of boats converging to the rescue.
With no alternative, Sanderson jumped in the freezing river and swam to the nearest boat, where he was pulled to safety and rushed to Palisade Medical Center. There he was treated for hypothermia, taking hours to bring his body temperature back to normal.
Sanderson was one of only two passengers to stay in a hospital overnight after the crash. Today he wears glasses as a result of jet fuel that seeped into his eyes.

An inspiring speaker, Sanderson told his tale in exacting detail peppered with surprisingly humorous anecdotes. He offered personal insights into the event, stating for example that as the plane dropped toward the river, it flew dangerously low over the George Washington Bridge. Capt. Sullenberger knew he not only had the lives of the passengers in his hands, but the safety of the bridge and everyone on it as well.
Sullenberger was uniquely suited to handle the situation, as he was not only a jet pilot but also trained in flying gliders without power.
Sanderson also offered his opinion that the makeup of the passengers contributed to the orderliness with which the plane was evacuated. Most of the passengers, he stated, were business people, not families. They were used to collaborating toward common goals.
After the talk, attendees spoke among themselves about what they had heard and lessons learned.
“I think his assessment was probably right,” said attendee Judi Singer-Barber, from State Farm. “If it was a plane full of women and children it would have been very different because the women have to take care of the children. There weren’t that many so they had to function as a team.”
“That was the most interesting comment that he made,” agreed Stephen Jarahian, retiree. “The composition of the passengers. They were all out on the wing in a minute, a minute and a half. It was really a very interesting perspective.”
Everyone agreed that in the future they would pay more attention to flight attendants as they discussed plane safety. Sanderson cautioned the crowd that every plane is different and it is important to be fully cognizant of your surroundings.
“I fly a lot,” said attendee Corrine Statia, of Absolutevents. “And I’m one of the people that look, I see the exit, I’m okay. I don’t always listen every time, like it’s all the same. But he made a very valid point that you should pay attention because when it happened, he didn’t end up where he started in the plane. I’ve never heard somebody who’s been in a plane crash tell what that experience was like.”
“Just going through that whole experience, coming out the other end, it is kind of miraculous,” said Statia. “Because what he described, what he went through, it doesn’t sound like he was supposed to be alive at the end of that.”

Maria Nieves, president and CEO of the Hudson Chamber of Commerce, introduced the talk, their first event of 2014.
“I wanted to meet people,” said attendee Statia about why she came to the event. “My business is in Hudson County.”
“They do a great job,” said Singer-Barber. “And the people I talk to are interesting and have a lot to say.”
“They’re really good,” added Jarahian. “It’s really important that business people have a place that we can meet.”
The Chamber, founded in 1888, currently has about 350 members. They plan to hold more than 25 events in 2014. For more information visit hudsonchamber.org.