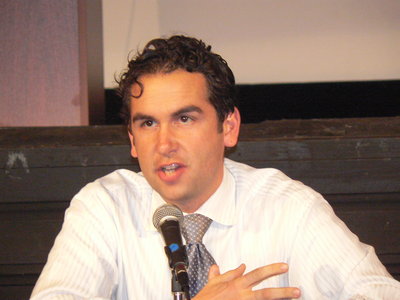 JERSEY CITY – By a vote of 7-1-1, the Jersey City Council passed a controversial measure introduced by the administration of Mayor Steven Fulop that requires city-based businesses with 10 or more employees to provide earned sick leave to their employees. The law requires that employees begin to earn paid sick days after employees have worked the equivalent of 90 full days.
Although similar laws have been passed in other states, this type of law is a first for New Jersey.
Dozens of workers, workers rights groups, and labor organizations turned up to show their support at the Sept. 25 City Council meeting. Several people gave first-hand accounts of problems that can occur when workers show up to work when they are sick because they do not have any sick days available. Four Jersey City-based small business owners also spoke in favor of the measure, arguing that offering workers earned sick days “makes good business sense.”
Only one speaker, Central Avenue Special Improvement District Manager David Diaz, spoke in opposition of the ordinance. Noting that small businesses and start-up companies are struggling to make it, Diaz told the council that small businesses support the intent of the measure, but not its specifics.
“Wanted to offer sick leave to employees and being able to offer sick leave to employees are two different things,” Diaz told the council Wednesday night.
Diaz asked that the ordinance be tabled so its affects on the business community can be studied further.
Ward D City Councilman Michael Yun, himself a small business owner, made a motion to table the ordinance, but the attempt was defeated by a vote of 7 to 2. Ward C City Councilman Richard Boggiano voted in support of Yun’s motion to table.
In the end the measure passed and gainedthe support of council members Frank Gajewski (Ward A), Khemraj “Chico” Ramchal (Ward B), Candice Osborne (Ward E), Diane Coleman (Ward F), Daniel Rivera, Joyce Watterman, and Council President Rolando Lavarro Jr.
Boggiano abstained. Yun voted against the ordinance.
After the measure passed Mayor Fulop issued a statement.
“Paid sick leave will help working families in Jersey City so they won’t have to choose between missing a day of work and caring for their own health or that of a family member,” Fulop said. “Not only is this a matter of basic human dignity, it is also a public health initiative that will benefit all Jersey City residents as well as those who work here. We commend the City Council for voting in support. We know that we will be sued over this legislation, which is disappointing and harmful to Jersey City. It means delaying these important benefits to those most in need while at the same time not enhancing public health in the city.”
There is speculation the law will be challenged in court by business groups. Corporation Counsel Jeremy Farrell said Wednesday that he believes the law will stand up in court.
For more coverage of this story see this weekend’s edition of the Jersey City Reporter or visit HudsonReporter.com. – E. Assata Wright