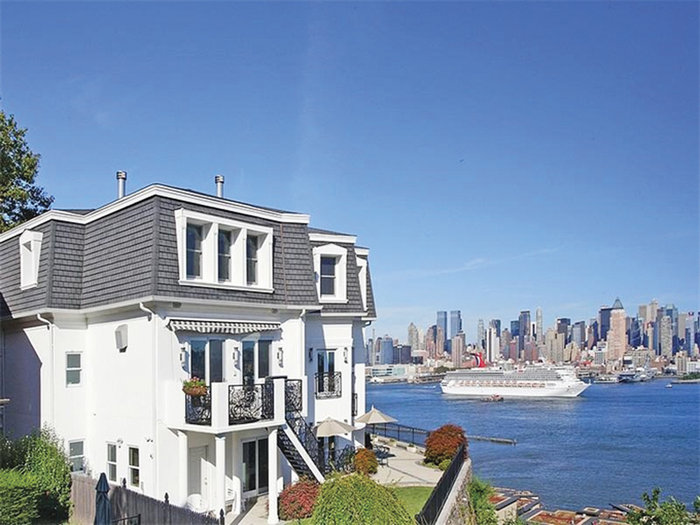 When driving along the Hudson River on River Road, one may look up and spot several mansions high atop the Palisade Hills of Weehawken. Now, one such property – with panoramic views of New York City – is for sale for $7.5 million.
The 7,000 square foot custom-built home is described as having a library, five-stop elevator, marble fireplaces, New York views from every room, three bedrooms, three bathrooms, and two more partial bathrooms. The home at 8 Hamilton Place also has history.
The “Highwood Estate” was built by James Gore King (1791-1853). A New York banking magnate and the son of a statesman, King moved to Weehawken before becoming president of the Erie Railroad and later a U.S. Representative from 1849 to 1851. King entertained guests ranging from Charles Dickens to Washington Irving to Daniel Webster.
The neighborhood of estates, King’s Bluff, is named for King. The area has historical prominence for other reasons as well. Two hundred and nine years ago, two of America’s most famous founding fathers gathered on the bluffs of the Palisades Cliffs and had a good old fashioned duel. Aaron Burr, the sitting vice president at the time, shot beloved Treasury Secretary Alexander Hamilton, who later died from his wound. Burr went down in infamy, while Hamilton’s legacy was preserved in the name of the main street through King’s Bluff: Hamilton Avenue.

In recent years, homes in that historic neighborhood have sold for millions of dollars.
“The view, it’s all about the view,” said Marek Zagorski, a realtor with Sotheby’s International who has made a career, along with his wife Helena Lobo-Zagorski, of managing King’s Bluff properties. “For this type of price point, you could go 30 minutes further into New Jersey and have a much bigger place on a much bigger piece of land. The view makes the difference.”
While these homes have housed Weehawken politicians, Wall Street executives, and government officials, the most ostentatious of the group are almost exclusively sold to wealthy foreign nationals who might never spend more than a few months out of the year in town.
“There’s a limited number of people who can afford to spend as much on a house as these types of properties cost,” said Lobo-Zagorski. “Most of them are Chinese, although you’ve got some Russian oligarchs as well.”

Barbara Tulko, another realtor who lives in the neighborhood and has been selling Weehawken properties for over 30 years, pointed to the neighborhood’s quiet atmosphere (King’s Bluff essentially a series of streets all connected to one dead-end, allowing for only one way in and out off of Boulevard East) and the inherent lack of traffic.
“Houses are a bit more grandiose on the Bluff, but it’s not an area with heavy traffic,” she said. “There’s a sense that it’s a bit more serene. It’s a nice little enclave.”
She said that unlike other towns situated on the Palisades, such as West New York or Jersey City, Weehawken has zoning ordinances that preclude contractors from obstructing the view.
“So if you have the view, it doesn’t matter what happens,” Tulko said. “Weehawken’s got small town quality to it that neighboring municipalities don’t.”

Despite a noticeable lack of rolling pastures and tennis courts, many of the Bluff’s properties are referred to, in the real estate circles at least, as “estates.” They’re usually named for the family that built them, though sometimes, Lobo-Zagorski admitted, realtors come up with the nicknames for added effect.
“When I sold this one, we called it the Alcott Estate,” said Lobo-Zagorski with a grin as she walked past one of the Spanish-style houses on King Road recently. When asked if it had anything to do with the famous author Louisa May Alcott, Lobo-Zagorski replied, “I don’t know, but it’s got a nice ring to it, doesn’t it?”
Though many of the King’s Bluff “estates” are passed down through generations, 8 Hamilton was not, and recently went back on the market for a whopping $7.5 million. The Zagorskis are tasked with selling the property, a challenge they relish.
“Selling luxury property is like selling fine art,” said Lobo-Zagorski. “People know it when they see it, and sometimes you see something you’ve never seen before. In 8 Hamilton, we’ve got ourselves a Mona Lisa.”

The future of the Bluff

Tulko pointed out that despite Weehawken’s ever-evolving identity, King’s Bluff is unlikely to change anytime soon, because of the zoning ordinances but also because there’s no space to build more homes.
“Weehawken is one of the only places in Hudson County where there’s still room to build, but not in King’s Bluff,” she said. “The only way it’s changing is that people are restoring the older properties. Every time I turn around I see a sign that another restoration’s being done.”
At the very end of Kingswood Avenue, potentially the most tucked away of all the King’s Bluff streets, three properties were recently built. All three are fabulous mansions, but only two are occupied. Whoever ends up buying the third may be the last person to move into the neighborhood for a very long time, as that property was the last of the available undeveloped lots.
Rumor has it that Madonna recently made an offer of $10 million for the property, but was turned down by the contractor.
“I can understand it,” said Zagorski. “She might bring unwanted attention. It’s a quiet neighborhood.”
It’s likely to remain that way for a very long time.

Dean DeChiaro may be reached at deand@hudsonreporter.com