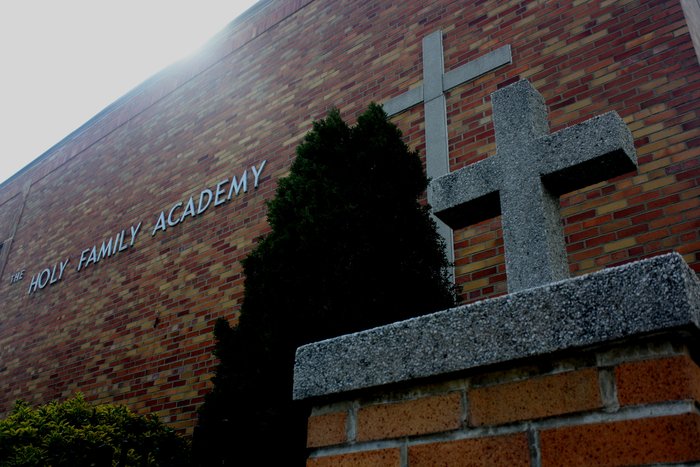 Shock was perhaps the first reaction many parents had when they received an email from Jennifer Mulcahy, chairperson of the Board of Trustees of Holy Family Academy, on April 18, saying that the school will close its doors on June 15 after the last class graduates.
“It is with great sadness that I must announce today that the current senior class will be the last one to graduate from Holy Family Academy,” Mulcahy wrote. “Despite our best efforts, hard work and enthusiasm, we have been unable to overcome the daunting financial challenges of financing and running a private high school with a consistent decline in enrollment in this difficult economy. We have explored every available means of keeping our doors open but in the end, we remain unable to reconcile the cost of providing a high-quality, Catholic education with the available revenue sources to do so.”
She said the decision was made after much contemplation and with a heavy heart.
“Our focus for now is on completing the current school year, advancing our graduating class, and assisting with the placement of our other students,” she said.
On Friday after the announcement was made public, Principal Mary Tremitiedi and members of the board met with students at the school.
“We brought in counselors to help,” Tremitiedi said. “We met with the students and will be helping to make arrangements for them to attend other schools.”
On April 28, at 1 p.m., representatives from other Catholic schools will visit HFA in an open house at which the students will have their transcripts available.
“We will hold another open house on April 30,” Tremitiedi said. “We do whatever we can to place girls where they want to go.”
Tremitiedi said she had informed the families of the 8th graders who had already enrolled for September that the school is closing and that they will have to make other arrangements.
“We’re also helping our teachers,” she said. “Other Catholic schools have already called us. Hopefully, they will be placed.”
Mulcahy said fundraising will continue to help pay for existing bills.

The news of the school closing comes five years after the school was first informed that it would no longer be supported by the Sisters of St. Joseph, who founded the school in 1925.
The sisters said that this was due to reduced enrollment and the continued demands of running the school, and proposed closing the doors at the end of the 2008-2009 school year.
Holy Family Academy has operated at several sites in Bayonne for 87 years, but moved to its current location in 1954.
Over the last decade, graduating classes have numbered under 50 students, down more than 100 students in the 1980s, despite the school’s sterling academic reputation that placed 100 percent of its students in colleges.
Out of this threat to close emerged “I Believe in HFA, Inc.,” a group of alumni, community leaders, local business owners, and parents, who vowed to keep the school open. The group succeeded in winning several important reprieves—first keeping the doors open to incoming freshman for the 2008- 2009 school year, a critical piece in saving the school, and later, coming up with a lease agreement with the sisters that allowed the school to remain at its current location.
But it was a struggle to keep on fundraising to raise the estimated $2 million needed to meet annual expenses.
Through fundraising efforts, marketing campaigns, strategic planning, and general support, “I Believe in HFA” sought to unite parents, faculty, current and prospective students, alumni, and community leaders in an effort to generate funds.
Meanwhile, the school did outreach to Catholic elementary schools throughout Hudson County and Staten Island. Due to the expansion of the Hudson-Bergen Light Rail line to Eighth Street—only a few blocks from HFA—the school became more accessible. The group developed a new promotional package to increase enrollment, emphasizing the school’s many attractive features. The current student population comes largely from Bayonne, Staten Island, Jersey City, North Bergen, Union City, Hoboken, and West New York.

At this point, Tremitiedi said, the Sisters of St. Joseph still own the property, but it is unclear what will become of it.
Rumors are rampant, and there was speculation five years ago that a development deal for the site had been discussed with the sisters. One rumor is that the Bayonne Public School District might be eyeing the site for acquisition, prompted possibly by the district’s maintenance facility located in the vicinity.
Tremitiedi said the effort to save the school had not been wasted.
“The girls who graduated here received a quality education as a result of some very hard work, fundraising, and recruitment,” she said.