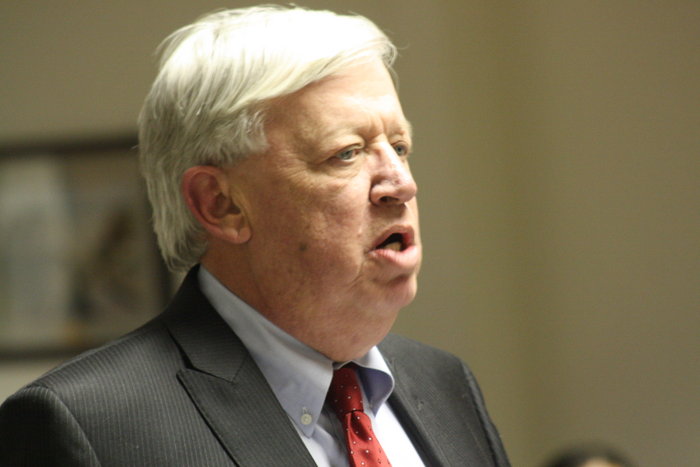 Four months after Hurricane Sandy lashed the region, Hudson County is still feeling its impact. But according to County Executive Tom DeGise in his State of the County address delivered before the Board of Freeholders on Feb. 14, the response to the crisis was heroic at times.
“Not to put too fine a point on it, but when you build above the 100-year flood plain and it still leaves you four feet underwater, maybe somebody up there is trying to tell you something,” DeGise said. “Perhaps the lesson is not to look for certainty in numbers, but in our shared values.”
Expressing gratitude for “the remarkable patience of our residents during Hurricane Sandy and their resilience in its aftermath,” DeGise also celebrated the dedication of county employees who worked so tirelessly and so well during the disaster.
He paid tribute to Jack Burns, head of the Hudson County Office of Emergency Management; Harold Demellier, director of the Department of Roads and Public Property; Ben Lopez, director of the Department of Family Services; County Clerk Barbara Netchert; Superintendent of Elections Marie Borace; and the County Board of Elections.

_____________
“When you build above the 100-year flood plain and it still leaves you four feet underwater, maybe somebody up there is trying to tell you something.” – Tom DeGise
____________
“The County Jail functioned on a razor’s edge, with the historically high flood waters threatening its emergency generators. Yet Oscar Aviles and his team maintained order and kept the public safe,” DeGise said. “County Sheriff Frank Schillari and his officers carried out their duties and supported our municipalities to the fullest extent.”
He also paid tribute to now-retired Parks Director Tom McCann and Finance Director Cheryl Fuller for the roles they played in dealing with the disaster.
“One of the benefits of all that time on the job is seeing the connection between the dry actions of government and the results they eventually produce,” DeGise said.
Two areas that the county has seen success in dealing with have been recidivism and chronic homelessness, citing the nationally-recognized work of the prisoner re-entry program with Integrity House at the County Jail as a big success.
“Before a single female inmate was helped, we had strenuous debate, complaints from different quarters, and I was called a few names I’d rather not repeat,” DeGise said. “And when that was all over, we still had to win funding for the program through one of the toughest competitive grant processes authorized by the U.S. government. Next month HBO will present a documentary about our program, which has dramatically reduced recidivism rates for the women who complete it. It continues to be funded through that highly competitive grant process authorized by the federal government’s Second Chance Act, a clear sign that Washington believes our approach works.”
According to reports supplied by the county, the program’s numbers since 2009 appear to have shown a remarkable success rate at keeping women who go through the program from re-entering jail. Over the last three years, of the 175 individuals sent through the program, only 36 have been rearrested, which is recidivism rate of 21 percent compared historically to 50 percent. Re-arrests are recorded into a statewide system showing individuals that are rearrested anywhere in New Jersey.
The program focuses on women who struggle to get reintegrated into general society. Many do not know how to interact, how to get jobs, or how to set themselves up to keep from failing. Many are still addicted to or are drawn back toward drug use.
“Now we need action in Trenton to increase the program’s effectiveness,” DeGise said. “The New Jersey State Legislature currently has a bill before it which would allow county jails to be certified as residential drug treatment centers. This is crucial because released drug offenders must go through a program conducted by a licensed treatment center in order to qualify for general assistance funds. If county jails like ours can qualify for that license, then the inmates already going through treatment as part of our program can leave jail and immediately qualify for general assistance. This would provide them with a small amount of cash assistance so they can begin a new life outside prison without resorting to petty crime in order to survive, as so many do.”

County made strides against homelessness

“Our county was one of the first in the nation to adopt the ‘Housing First’ approach to reduce chronic homelessness,” DeGise said. “Housing First gets the chronically homeless into housing and then connects them with comprehensive services like medical care and addiction counseling. It is not only more compassionate, it is more cost-effective. But to support Housing First, first you need the housing. Bit by bit we are providing it.”
He said the county has invested more than $3 million HOME funds to help build 96 units at the Hoboken YMCA in partnership with MBS Housing Urban Renewal.
“Working with the North Hudson Community Action Council, the City of Union City and the West New York Housing Authority, we will add another 18 units next month,” DeGise said. “This project is unique. It is not just affordable but specifically designed to offer priority placement to homeless veterans. It is called Homes for Heroes.”
He said these are elements of a 10-year plan to eradicate chronic homelessness.
The county also moved away from renting space for its own operations and purchased buildings as a means of long-term cost control and tailoring space to its own needs.

New Schools of Technology building in Secaucus on hold

In the past, the freeholders had talked of building a new campus for the Schools of Technology – a group of countywide public high schools – in Secaucus, but they were unsure of a funding source.
“While it has long been our hope to see a new campus constructed for the Schools of Technology, it is clear that in the current political and economic climate, the needed state support just isn’t going to be there,” DeGise said. “So we will have to begin putting money into the existing campus buildings. Shiny and new is great. But restored and improved can work too.”
In other areas, the county has managed to move ahead with its support for redevelopment projects in West Hudson, DeGise said. This will include possible final resolution of the 130-acre Koppers Koke site the county was been seeking to sell for redevelopment for decades.
“We see the site as home for new, job-producing light manufacturing, third party logistics and other green re-industrialization efforts,” DeGise said.
Also upcoming is the opening the new 32nd Street Walking Bridge spanning Kennedy Boulevard in Union City and North Bergen that will greatly improve pedestrian safety.
“Next year, will see the opening of the county’s first public golf course in 80 years,” DeGise said. “And also in 2014 we will see the completion of the largest public works project in our County’s history, the $52 million replacement of the 14th Street Viaduct in Hoboken.
The completion of the Viaduct will significantly improve the long obsolete connection between Hoboken, Union City and Jersey City. It may also spur more private investment in the area as developers see the bustling new streetscape under the Viaduct that is part of the project.”
The county continues to create a site for a new county criminal court house in Jersey City, purchasing properties that will temporarily be used for court house parking and the eventual continuation of Central Avenue into Newark Avenue.
“This should improve traffic flow in the neighborhood. For now, our hope is to address the concerns raised by Chief Assignment Judge Peter Bariso and use these properties to provide long-needed juror parking,” DeGise said.