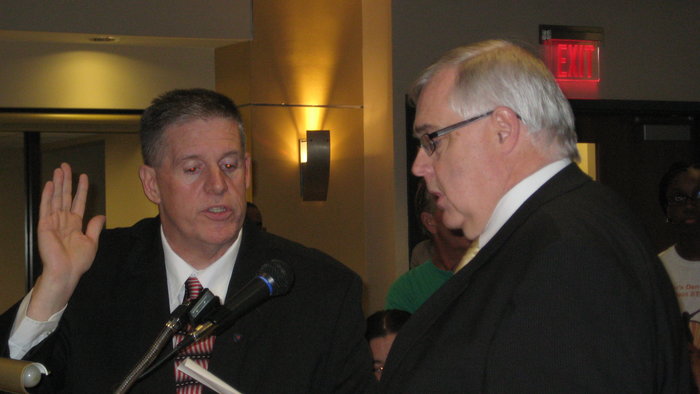 JERSEY CITY – Exhibiting a level of unity that has been lacking in recent months, the Jersey City Board of Education voted 7-0 to appoint Gerald Lyons to the board seat vacated by Marvin Adames last month.
Lyons, who ran for the Board of Education in April and came in fourth, had received broad support from parents, teachers, students and other members of the community. In the weeks since Adames resigned supporters of Lyons have written letters and have spoken out in support of him at school board meetings and other venues.
Recently, Lyons, who is white, had even won over those members of the Latino and African American communities who initially believed Adames’ seat should be given to another Latino.
Despite this strong support, many people believed the board majority would go against community sentiment and appoint someone else. Parent and activist Peter O’Reilly had been mentioned as a likely contender for the board who was said to have the support of some board trustees.
Several other people had also approached the board and requested that they be considered for the vacancy. Lyons, O’Reilly, and these other candidates made five-minute presentations at the Sept. 11 special meeting addressing their qualifications and why they wanted to join the school board.
In the end, however, all board members who were present voted in favor of Lyons. Lyons received the support of school trustees Carol Harrison-Arnold, Sterling Waterman, Angel Valentin, Vidya Gangadin, Marilyn Roman, Carol Lester, and board chairwoman Suzanne Mack.
Board member Sangeeta Ranade did not attend the meeting and tried to cast her vote by calling Lester on a cell phone and having Lester record her vote on her behalf. An attorney for the board explained that a vote cannot be cast in such a manner and Ranade was marked “absent” for the vote. Had she been permitted to have her vote recorded, Radade would have abstained from voting, she told Lester, since she had missed the meeting and did not hear the presentations made by the board candidates.
Ranade later joined the meeting by conference call.
After Lyons was appointed he was immediately sworn in and took his seat alongside his fellow board members.
According to Mack, Lyons will serve on the board through April 2013 and will run in a special election next April to determine whether he can keep his seat to serve out the remainder of Adames’ term in office. Adames’ term ends in April 2014.
On Tuesday the board also selected a new vice chair since that was a position Adames also help prior to his resignation. After a 60-minute closed-door executive session the board voted 7-0-2 to approve Waterman as vice chair. Waterman was the board chairman last year.
Lester and Ranade abstained from voting. The remaining board members voted in Waterman’s favor. – E. Assata Wright