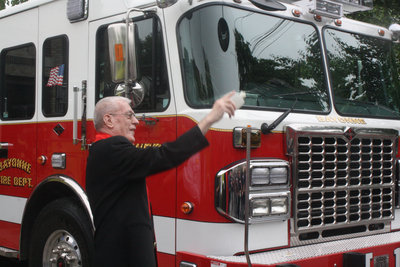 Putting their backs into it, firefighters from the Fourth Street Station in Bergen Point performed a ritual as old as the fire department itself, and pushed the latest addition to the local fire fleet into its parking bay.
“This goes back to the days when rigs were pulled by horses,” said Fire Chief Greg Rogers.
Because horses could not back up well, firefighters had to push the rigs into the fire houses.
This small ritual welcomed the new 75-foot mid-mount ladder tower platform truck. It was especially constructed to fit into every one of the city’s fire houses, but will operate out of Fire Station No. 2, Fourth Street and Zabriskie Avenue, supplying fire services primarily to the southern portion of Bayonne.
Rogers, who called the vehicle a “fire escape on wheels,” said it would also provide protection to the rest of the city when needed.
At a ceremony held on May 25, Rogers said platform and ladder connected to it allows the vehicle to provide continuous rescue operations, differing from the 22-year old platform this unit replaces because the platform remains in place rather than going up and down with two people at a time.
Paid for by a grant with a 25 percent match, the new vehicle cost $848,177, but is worth every cent, fire officials said. Of this, $720,000 was from a grant through the Federal Emergency Management Agency’s (FEMA) Assistance to Firefighters Grant (AFG) program, the second largest grant received in Bayonne Fire Department’s history. The largest is a $3.6 million federal grant that is paying for the construction of a new firehouse on the east side of Bayonne.

Rogers said the new vehicle is equipped with the most modern safety and fire fighting equipment available, and the truck carries all of the necessary tools needed in an emergency situation from ladders to extracting equipment.
After several weeks of training, firefighters were on hand to officially put the vehicle into operation, with a ceremony that featured the truck’s unveiling, a blessing of the new truck by the department chaplain Fr. John Doherty and a send-off of the old truck.
Rogers said three to five firefighters will operate the vehicle, and all personnel who will be involved with the truck have undergone training over the last two weeks. Some sessions were provided by the manufacturer and others in house.
“The firefighters in this station made it clear that they needed a new vehicle,” Rogers said. “And you can see that the old vehicle needed to be replaced with rust in places. We promised to find a way, and between the mayor, public safety director, and myself, we found a way.”
Calling the vehicle “the shinning light” of the department, Roger said this is part of a number of improvements to the department that are coming online shortly, including the breaking of ground of the new fire house, and two new fire boats, a fully equipped floating fire rescue unit and a back-up boat, all of which were paid for by grants,
“I hope you never have to use this vehicle,” Mayor Mark Smith. “But in reality, I know you will.”
Public Safety Director Jason O’Donnell, who is also a fire captain, said he already knew the department had the best personnel.
“Now you have the best equipment,” he said.