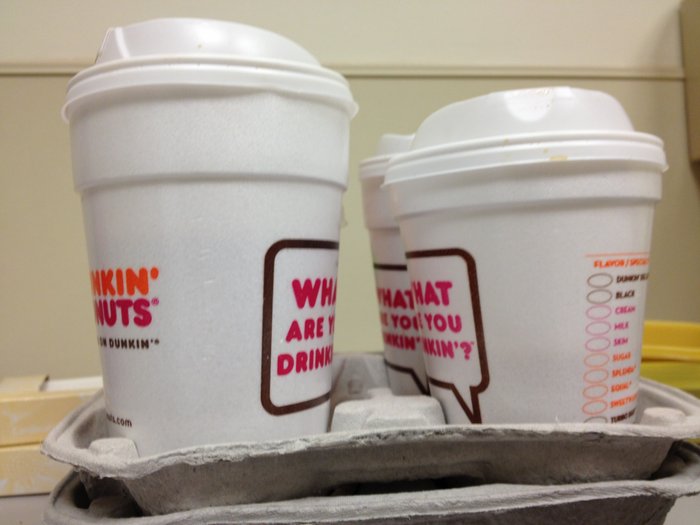 Environmental Committee members have decided to keep the local Styrofoam ban after meeting with representatives from the Dart Container Corporation and the American Chemistry Council, who asked the town to retract the measure.
The mayor and Town Council passed a resolution in October 2011to ban the use of polystyrene foam from schools, restaurants, and small businesses because it is not biodegradable and can contaminate the soil and waterways. Local restaurants like Outback Steakhouse and the Bonefish Grill immediately complied with the ban, but establishments such as the Dunkin’ Donuts in town center switched back to Styrofoam after a trial run using paper because customers complained the paper cups were too hot to hold.
The term Styrofoam is commonly used to describe polystyrene foam, which comes in the form of disposable cups, plates, and take-out containers.
The resolution got the attention of the American Chemistry Council, the trade group for the Dart Container Corporation, which helped initiate the meeting.

Several members of the Environmental Committee were present at the meeting, including chair Amanda Nesheiwat, Hackensack Riverkeeper Bill Sheehan, committee member Eliana Balas, and local recycling coordinator Stephen Badalamenti.
“They said they wanted to work with us to show the town what they are doing with Styrofoam…but we don’t support single-use items. We want to eliminate this from our town,” said Nesheiwat.
“We wanted to find out a little more about the issues that the people in Secaucus had with preserve packaging, to help educate them about some of the realities, and talk about other ways to address their concerns without restricting or banning the use of Styrofoam,” said Ray Ehrlich, Dart Container Corporation regional manager for government affairs and the environment. He participated in the meeting via conference call.
The Dart Container Corporation is headquartered in Mason, Michigan, has worldwide reach, and makes 600 products, including Styrofoam and plastics.

“We should not be making a product that is used for 20 minutes and stays on the planet for 100 years,” said Nesheiwat. She said the group debated the issue of Styrofoam for more than an hour, and that the committee raised the point that the product, which does not biodegrade, ends up in the Hackensack River and harms wildlife.
“You’d be surprised at how many Dunkin’ Donuts cups are in the water,” said Nesheiwat. “I have seen carcasses of birds with Styrofoam and bottle caps in their bellies during river clean-ups.”
“Bans don’t work. They don’t achieve the goal of reducing litter or reducing solid waste,” said Ehrlich. “Litter is not a product issue, it is a behavior issue.”
Ehrlich said that Styrofoam should not be blamed for problems with litter because people don’t dispose of their waste properly.
“Disposables to go are with us to stay. That is our culture now.” He said once you accept that, then you look at the product from a life cycle approach, from energy usage to recovery and that Styrofoam is resource-efficient and recyclable.
During the meeting the committee also raised the issue that Styrofoam takes up a lot of room in landfills.
“We could reduce the amount of landfills by 30 percent if we got rid of Styrofoam,” noted Nesheiwat.
“Most people mistakenly think that material biodegrades in landfills,” said Ehrlich.
He said that landfills do not get enough air, moisture, and sunlight to allow for degradation on purpose, to prevent toxic chemicals from leaching out.

Dart Container Corporation offered to help recycle polystyrene foam products. He said the company has worked with municipalities in Pennsylvania to pick up their containers for recycling at their plant.
“There is no way that they would be able to collect Styrofoam in Secaucus,” said Nesheiwat. She said she was not convinced recycling was feasible given the plant’s location in Pennsylvania and she anticipated it would cost the town money and take years to set up a recycling system.
“Somehow we can modify to make it work for Secaucus,” said Ehrlich, who feels as though a workaround was possible. The company currently supplies polystyrene foam products to local businesses like Dunkin’ Donuts and Walmart.
He said that the corporation, however, is unwilling to work with Secaucus to explore recycling solutions unless they retract their ban.
“We will not work with them unless they retract their ban,” said Ehrlich
Ehrlich said that he has found that communities that ban polystyrene foam, many of which are located in California, are not willing to readdress it.
“The ban is very symbolic to me,” said Ehrlich.

Starting at the high school

With Earth Day on April 22, Nesheiwat is using it as an opportunity to raise awareness about Styrofoam usage and will speak to high school students on April 26. She said that she is working at the high school level to eliminate Styrofoam from the cafeteria. Then she will reach out to local businesses in the center of town and ask groups like Bagel Buffet and Cheeseburger in Paradise to switch their containers.
While the Dunkin’ Donuts in the center of town did switch to paper after the ban, they switched back because customers complained that the cups were too hot.
“It would work if they had those sleeves but they are expensive,” said Nesheiwat. She said that if they raise the price of coffee by a penny then they could afford to get the sleeves.
“The era of Styrofoam is ending,” said Nesheiwat. She said that fellow college students at Ramapo find the product out of the question as an option.
“Hopefully the high school students and middle school students will get the same idea.”
Neishewat said that the ban on Styrofoam works but that “you have to get people to understand the law.”