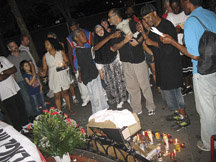 Over the past several years the area outside the Journal Square transit station on Kennedy Blvd. has become the de facto year-round home to a growing community of homeless people who congregate near the 9/11 Memorial Fountain or the farmers market area.
Residents and neighborhood groups have periodically asked the city, county, and advocates for the homeless what can be done to move this population into shelters.
In the wake of three homeless deaths at Journal Square recently, residents have renewed their calls for help for the area’s homeless.

A community battling many issues

“We stick together and we try to look out for each other the best that we can,” said Yvette Wilson, 49, a homeless woman who everyone at Journal Square calls Mom. “I knew Fred before here. I used to work with him. That’s how I knew him and grew to love him.”

Fred, who recently died just two days before his 47th birthday, had either a heart attack or seizure. A specific cause of death has not been released.
Tears came to Wilson’s eyes as she remembered her friend. “He called me his sister. I called him my brother. And I loved him.”
Mom said she also knew Americo, whom everyone called Eric, and Yvonne – two other homeless people who died recently at Journal Square – but wasn’t as close to them. Still, she said, “I miss all three of them because I don’t get to see them no more.”
Yvonne suffered an asthma attack. Eric sustained head injuries after falling from the concrete upper deck that surrounds the transit station. He had been sleeping at the time he fell.
Still, she said that Yvonne taught her to have more patience and Eric “was my funny guy. He made me laugh a lot.”
Wilson said she has been living on the streets for about 10 years, and admitted she has “an addiction,” which she declined to specify.
“I had put my family through so much, for, like 10 years, that I couldn’t take them through it any more,” said Wilson. “I did this to myself. I don’t blame anybody for my predicament.”
Other homeless people interviewed at Journal Square talked of job loss, addiction, estrangement from family, and eventually eviction, and homelessness. One man, 51, said he had been incarcerated.
Some of the people interviewed had physical difficulties, such as Alfonso Daniels, 49, who walks with two canes and has trouble speaking.
Others appeared to have mental health problems.
Collectively, these individuals are the face of what homeless advocates call “the chronically homeless,” people who have many different social problems that make it difficult for them to get into shelters.

Hudson County has three homeless shelters: Palisades Emergency Residence Corp. in Union City, Lucy’s Shelter in Jersey City, and the Hoboken Homeless Shelter.
According to the Hudson County Alliance to End Homelessness, which conducts an annual Point in Time Homeless Census, there were 1,779 homeless people in Hudson County in 2010. This number includes both the chronically homeless and other people within this population.
In order to be admitted into any of the Hudson County homeless shelters a person must abide by several rules, two of the biggest being that they cannot drink and cannot do drugs. Such rules – while necessary to protect the safety and lives of shelter workers and others living in the shelters – make it difficult to get the chronically homeless off the streets since many of them have alcohol and drug problems.
Some homeless people, including those with addictions, avoid shelters, arguing that being in the facilities puts them in close quarters with too many people who are physically or mentally ill.
In addition to the shelters, which offer temporary housing, there are a number of programs throughout the county that move homeless people into permanent housing. But candidates must meet specific criteria.
“We have several programs that we offer at our agency. We have a combination of funding sources targeting different types of individuals who have been homeless, who have had a multitude of problems, from mental illness to addiction,” said Susan Milan, director of supportive housing for the Jersey City Episcopal Community Development Corp. “To access any program there is a qualification process. Some homeless people don’t have identification and, for example, for [the U.S. Dept. of Housing and Urban Development] to qualify someone, they have to have a birth certificate. They have to have proof of income. They have to have proof of disability.”
Milan’s agency, which receives money from HUD and the state Division of Mental Health Services, offers permanent housing to people through such programs as Housing Opportunities for Persons with AIDS; the Shelter Plus Care Program, which assists people with physical disabilities; and a Residential Intensive Support Team program, which targets people with mental illness.
However, some homeless people who qualify for these programs may be turned away from housing if they fail certain kinds of background checks, for instance, criminal background checks.
People who fall between the cracks remain on the streets.
One local activist said such rules make it hard to treat the needs of the people living at Journal Square.
“I understand why such rules are in place. And I know the people who do this work do a great job and have the best intentions,” said Erik-Anders Nilsson, a member of Jersey City Peace Movement, a community group that recently held a vigil for the three homeless people who died. “But these rules don’t match the reality of the lives of these people. I think it’s unrealistic to require someone to beat their addiction while they are still on the street. We know that people are most successful in beating their addictions when they are in stable supportive environments.”
Since 2003, Peace Movement members have regularly taken clothing, water, and food to the people living at Journal Square.
Two programs that advocates may try to replicate in Jersey City are the Housing First model and the serial inebriate model, which both target chronic homelessness.
The Housing First model offers chronically homeless individuals immediate permanent housing first, then helps them address their other issues (alcoholism, drug addiction, mental health problems, etc.) second. This is an opposite approach to most homeless programs that usually force people to get treatment before they’re considered eligible for housing.
The serial inebriate model offers treatment and “sober living” housing simultaneously to homeless people whose addictions have led to criminal arrests. Under the program, housing and treatment are offered as an alternative to incarceration.

‘Something’s wrong with this picture’

City Councilwoman Nidia Lopez, who represents Ward C, which includes the Journal Square area, began meeting with residents and homeless advocates after several constituents encouraged her to address the situation at the transit hub.
“I’m attending the Hudson County Alliance to End Homelessness meetings,” she said, referring to a local coalition of advocacy groups and government agencies that is coordinating programs for homeless people across the county. She said, “I’m going to those meetings so I can get educated about the issue and some possible solutions.”
In 2006, the Alliance put together a 10-year plan to end chronic homelessness in Hudson County. Through the plan, the Alliance pledged to acquire funding and leverage other resources to address the needs of the county’s chronically homeless. Since then, the county has received $300 million from the federal government, to address the needs of the chronically homeless. Of this $300 million, Lopez said, about $270 million has already been spent.
“When I hear that, and three homeless people die in one week,” Lopez added, “something’s wrong with this picture…I’m just looking for some answers to see how money is being spent, who’s getting funded, and what’s being done.”
There are two homeless programs, one in New York and another in Philadelphia, which Lopez said appear to have good track records helping chronically homeless women get off the streets and into permanent housing. Lopez is now trying to see whether either of these programs can be replicated in Jersey City.
The councilwoman said she’s interested in exploring a proposal that would require developers that receive city tax abatements to also renovate or build low cost housing on city-owned vacant land. The property could then be turned over to an organization such as the United Way of Hudson County, which would manage the housing.

Hudson County has a hotline for those seeking shelter and housing assistance. The hotline number is (800) 624-0287. It takes time for the phone to be answered, but eventually someone does pick up.
E-mail E. Assata Wright at awright@hudsonreporter.com.