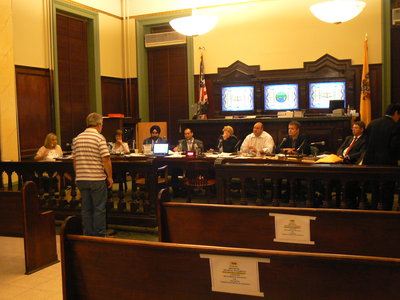 HOBOKEN – Now that the City Council passed two ordinances Wednesday night by 5-4 votes to lower the salary of Mayor Dawn Zimmer and her directors, the wait is on for Zimmer to exercise her power to veto the legislation. Zimmer has said she would veto the ordinances if they passed.
Wednesday’s meeting was the last one in which Zimmer’s opponents controlled the council majority.
Council President Beth Mason sponsored the legislation, which passed on a final reading on Wednesday night, that would lower Zimmer’s salary from approximately $116,000 to $100,000. A second ordinance lowers the range of salaries for directors in the city.
Mason said she has long called for a cut in salaries at the top as a way to save the taxpayers money. Mason also said she benchmarked against other cities in Hudson County, and the results revealed that Zimmer earns more than Jerramiah Healy, the mayor of the second largest city in the state, Jersey City. Healey took a pay cut in 2009, and he now earns approximately $112,000 annually, according to reports.
“We went out and benchmarked, and we’re way above everybody else,” Mason said.
Although Zimmer’s salary is higher than other mayors in Hudson County, Councilwoman Carol Marsh pointed out that neighboring towns have part-time mayors, which could disrupt the benchmarking process. Those mayors earn much lower salaries.
Councilman Peter Cunningham said he believes the council majority aligned against Zimmer is just “trying to hurt the administration.”
But Councilman Michael Russo said he doesn’t “want the public to be fooled.” “We’re not talking about lowering their salaries to $20,000,” Russo said. “The directors are still going to make $90,000 a year and the mayor is still going to make $100,000 a year…we’re not taking food out of their mouths.”
Resident Scott Siegel, who often sides with Zimmer, said the legislation was “disturbing to [him] on several accounts,” and called the measure “grandstanding.”
Zimmer took a pay cut from approximately $130,000 to approximately $116,000 when she took office in 2009.
Zimmer said that the proposed cuts go beyond her own 10 percent reduction that she took when she assumed the duties of mayor.
The council passed the legislation by a narrow 5-4 margin, but Zimmer said earlier on Wednesday that she will not sign the ordinances into law.