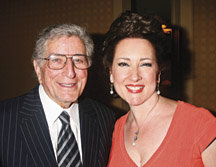 International singing sensation and Hoboken resident Cristina Fontanelli will sing a program of Italy’s best-loved songs, arias, Neapolitan and Christmas classics during her 7th annual “Christmas In Italy” concert at Merkin Concert Hall at Kaufman Center on Sunday, Nov. 28 at 3 p.m.
Called a “vocal genius” by the New York Sun, Ms. Fontanelli’s show is a love letter to her Italian heritage and a tribute to her grandparents.
“I decided to begin this tradition of performing holiday favorites and well-known songs and arias because of my concern that Italian folk and classical music is quickly becoming a lost art,” says Ms. Fontanelli.

For this special one-day event, Ms. Fontanelli will be accompanied by piano, mandolin, guitar and accordion in order to evoke the authentic Italian flavor of the music. The Montfort Academy Student Choir will join Cristina for the second year helping to accomplish her goal of preserving these musical gems for future generations.
Following in the footsteps of great Italian classical vocal artists such as Caruso, Pavarotti and Bocelli, Fontanelli is joining the ranks of those artists who sing popular songs with classically trained voices.
“We can see the Mona Lisa in the Louvre or the statue of David in Florence, but these vocal masterpieces need to be performed in order to survive,” says Ms. Fontanelli.
Fontanelli has become a well-known personality through her recordings, her appearances on radio, in concert, nightclubs, opera, and her acting debut on network television. She recently performed for Jimmy Kimmel’s “Feast of San Gennaro” in Hollywood; the prestigious 35th Annual Hamptons Classic Horse Show in Bridgehampton; at Rayburn Hall in Washington, D.C. and the Pierre Hotel in New York in honor of fashion icon Giorgio Gucci; and sang “Happy Birthday” to film icon Mickey Rooney for his official 90th birthday celebration.
The highly acclaimed soprano has performed with opera companies and in concert halls around the world, at the Clinton White House, The Presidential Inaugural Ball in 2005, as well as appearances with Tony Bennett, The Boston Pops, and Feinstein’s at Loews Regency, the St. Louis Symphony and three world tours with the Mantovani Orchestra.
She was awarded the OSIA Lifetime Achievement Award in the Arts (previous recipients include Luciano Pavarotti) and has been named “Woman of the Year” by many Italian organizations throughout the country.

A journey through beloved Italian songs

“Christmas In Italy” is a vocal journey through Italy’s best loved songs and arias as well as Neopolitan and Christmas classics. Her repertoire will include songs and arias by Donizetti, Tosti and Puccini, along with such classics as “Torna A Surriento,” “Chisto Paese d’o Sole” and the Italian Christmas classic “Tu Scendi dalle Stelle” (You Came Down From The Stars.”)
Born in Brooklyn, she is a graduate of The American Academy of Dramatic Arts, and attended The Juilliard School. Fontanelli’s CD “Great Italian Favorites” is currently available.
Merkin Concert Hall at Kaufman Center is located at 129 West 67th St., between Broadway and Amsterdam Avenue and tickets for “Christmas In Italy” are sold through the box office at (212) 501-3330 and online: www.kaufman-center.org with tickets ranging from $40 to $55 (Group discounts available). Ms. Fontanelli’s website is www.cristinafontanelli.com.