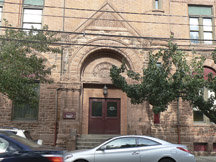 Little did William James Durant know as a student, first at St. Peter’s Prep and then at St. Peter’s College in Jersey City at the turn of the 20th century, that he would become one of the most well-read and respected historians and philosophers of all time.
As Will Durant, he is known as the author of the eleven books that compose the “Story of Civilization” series as well as numerous other books. But Durant would gain his greatest acclaim for spending 50 years on the “Story of Civilization,” which he called the “biography of mankind.”
Durant, helped by his beloved wife Ariel, created a body of work that won admirers among major figures such as Mahatma Gandhi and George Bernard Shaw.

“Education is a progressive discovery of our own ignorance.” – Will Durant
________

He also became a much-quoted personage on par with another famous Will – Will Rogers – with famous citations: “Education is a progressive discovery of our own ignorance,” “History is mostly guessing; the rest is prejudice,” and “To speak ill of others is a dishonest way of praising ourselves.”
Durant, born on Nov. 5, 1885 (125 years ago this Friday) in North Adams, Mass., died in 1981 at the age of 96 in Los Angeles, only two days after his birthday and within two weeks of his wife’s death.
His legacy, however, lives on through the teachings based on his scholarship at high schools and colleges across the country.

A civilized outlook with unpredictability

Durant, born to French-Canadian parents, grew up in Kearny and in Jersey City where he graduated from St. Peter’s Prep in 1903 and from St. Peter’s College in 1907. According to a St. Peter’s College spokesperson, Durant received a bachelor’s, masters, and honorary degree, but did not teach at the college.
The Will Durant Foundation’s website (www.willdurant.com) details how Durant was pursuing a career in the priesthood under the guidance of Jesuit teachers until in 1903, “he discovered the works of some alluring infidels in the Jersey City Public Library – Darwin, Huxley, Spencer and Haeckel.”
Finding new literary mentors as well as discovering socialism changed Durant’s life as he began working as a reporter at the New York Evening Journal. Then he went on to a teaching career at Seton Hall College (now University) in West Orange, where he was also a librarian. There he entered the seminary connected to the college, but eventually made a permanent break with any pursuit of a religious vocation and became estranged from his family for several years until the birth of his daughter, Ethel.
After leaving the seminary, Durant resumed teaching at the Ferrer Modern School in New York City, where he met his future wife, 14-year-old student Chaya Kaufman. She would marry Durant the year after they met and acquired the name “Ariel” that stayed with her for the rest of her life.
Having a wife and a child led to him lecturing at the Labor Temple in Manhattan on the history of various subjects. That evolved into his writing short booklets in the 1920’s called the “Story of Philosophy,” a precursor to his 11-volume magnum opus.
Durant over a five-decade period explored through his “Story of Civilization,” the beginnings of civilization in the East to the Age of Napoleon. His wife’s death and his death soon after stopped them from continuing the series up to 1945. In recent years, various notes and transcripts made by the Durants have been turned into new books.

Mary Anne McElroy knows a thing or two about historic scholarship as the chairperson of the history at Durant’s alma mater, St. Peter’s Prep.
McElroy recalls the works of Durant as a “great go-to source” when studying in college for her Master’s Degree in European history. As a history teacher years later, McElroy said she is reminded by fellow history teachers from across the country that Durant is still a valued source in high school classrooms where Advanced Placement European History is taught.
“Will and Ariel Durant personalized the history, made it interesting and made what was a college-level education easily available to everyone,” McElroy said.
McElroy said the only shortcoming with Durant’s “Story of Civilization” is that it looked at the big picture of what happened rather than going into considerable analysis of the motivation behind the history.
Yet she is still impressed by Durant’s accomplishments but not surprised.
“He’s a historian, and there are people who spend their entire lives working on the same subject,” McElroy said.
Ricardo Kaulessar can be reached at rkaulessar@hudsonreporter.com.