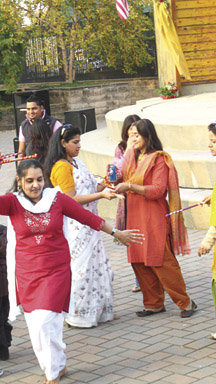 More than 1,000 residents turned up in Buchmuller Park last Saturday to share in the Indian celebration known as Diwali, or the “Festival of Lights.” The event marks the coming of a new season of the year, new life, and the promise of rebirth in the coming year.
For six hours, Buchmuller was all awash in bright colors and buoyant, upbeat music as the Indian Caucus of Secaucus introduced the larger community to one of India’s most festive religious days.
“Diwali is celebrated to show the victory of the good over evil,” explained Rajesh Nagpal, co-founder and president of the Indian Caucus of Secaucus, in the event program. “Diwali’s name comes from the Sanskrit word deepavali, which means ‘rows of lights.’ According to tradition, Diwali celebrates the joyous homecoming of Lord Rama, hero of the epic ‘Ramayana,’ after 14 years of exile.”

Diwali marked the second large cultural event to be hosted by the Indian Caucus of Secaucus.
________

The festival is celebrated by Hindus and Sikhs throughout the Indian Diaspora.
The Indian Caucus gave out chocolate candies to guests as they entered Buchmuller Park, “because for the festival of lights you have to have sweets. You always give out sweets during Diwali,” Nagpal explained.
“It was beautiful,” Nagpal told the Reporter after the festival. “Everyone really enjoyed it. Some people said we should have had it in Laurel Hill Park and not the smaller Buchmuller Park…but it was really great to see everybody coming out to enjoy the culture of India.”
Diwali marked the second large cultural event hosted by the caucus, which was formed in July and which held its inaugural event – the 63rd anniversary of India’s independence from British rule – at the Arthur F. Couch Performing Arts Center on Aug. 22. The independence day celebration was also followed by a “Bollywood” movie night featuring the musical “Lage Raho Munna Bhai,” held in Buchmuller Park in September.
The community group plans to host other cultural events throughout the year to introduce non-Indians in Secaucus to Indian history and traditions. At present, the caucus is trying to put together a Holi, or “festival of colors,” celebration.
The Diwali celebration in Buchmuller Park included performances by more than 30 acts, activities for kids, food from six Indian restaurants, and clothing and crafts from about 10 vendors.
Secaucus is home to one of Hudson County’s fastest growing Indian communities. Many of the town’s Indians are drawn, in part, to the Shree Swaminarayan Temple on Penhorn Avenue.
E-mail E. Assata Wright at awright@hudsonreporter.com.