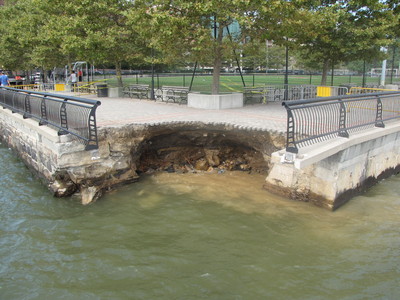 Teredos, ship worms, termites of the sea. No matter what you call them, these mollusks are eating away at the wooden piers in Hoboken.
A large portion of the walkway between Sinatra Field and the Hudson River collapsed last week, another in a series of generally minor pier collapses along the waterfront.
Acting Mayor Dawn Zimmer addressed the situation last week after a diving team inspected Sinatra Park pier and Castle Point pier, a portion of which also collapsed in recent years.
The Stevens Institute parking lot pier next to Sinatra Park is also falling in the river, and Zimmer said experts claim teredos are the culprits in each case.
Pier A and Pier C are both built with steel-wrapped cement pilings, so city officials said these two structures are safe.

Zimmer said the city is taking preventative measures to stop the erosion of the pier walkway at Sinatra Field beginning this Monday.
Construction crews will install metal sheet pilings to prop up the pier, and possibly portions of the field.
City officials couldn’t immediately say how much of the field rests on top of the wooden pilings.
Over the weekend, all events scheduled to take place at Sinatra Field have been relocated. On Saturday events will be held at the Hoboken High School field, 10th and Jefferson streets, and on Sunday events will be held at Waterfront Park, Port Imperial Blvd., Weehawken.
Fencing has been erected to quarantine the eroding corner of the walkway and the city has increased police patrols in the area.
The sheet pilings are a short-term solution, Zimmer said, and the city will conduct additional studies to determine what the best long-term plan is. Zimmer added that the metal sheet piles will be part of the long-term plan, so that the short-term option isn’t just an expensive stopgap.
She couldn’t say how much the initial measures will cost the city, but did commit to seeking out as much grant money and other government funding available.
“Every single funding option is possible,” she said, but until funding comes through “we may have to bond to cover the cost of this.”
They are also reaching out to private developers whose piers uptown may also be at risk.

Zimmer said last week that the teredo problem has been known since 1995, when city engineers first began to investigate the issue.
She said a letter recommended the city remove the timber and replace the pilings.
“It’s going to be quite a process here to find out why this didn’t get done,” she said. “But what’s most important to me is that we secure the area and protect the waterfront.”
She said the erosion may be making its way to the soccer field soon.
Once she reviews the analysis done by Boswell Underwater Engineering, the diving team that inspected the structures, she plans to declare an emergency, notify the state and City Council (both of whom she has already alerted), and take immediate action to secure the area.
“The longer we wait, the more damage we’re going to have,” she said.
Zimmer said Boswell also conducted a report in 2008 following the Castle Point pier collapse and that the city could have again taken action at that time.
One city official said the sticking point was the cost to replace the wooden pilings, but now the city has no choice.
The city was just granted $100,000 by Hudson County Open Space Fund to help alleviate the Castle Point erosion.

Zimmer said the teredos are more prevalent now since the Hudson River has become much cleaner over the past two decades.
The small mollusks couldn’t survive in the river when sewage levels were higher, but now the clam-like marine creature is making a comeback.
The teredos can grow to over two feet in length and are also known to eat through cement.
Timothy J. Carroll may be reached at tcarroll@hudsonreporter.com.