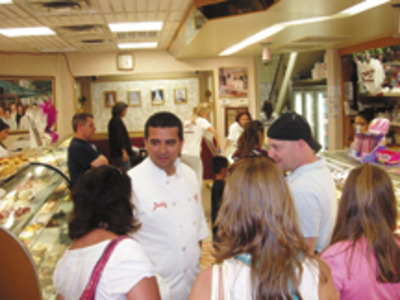 In a town getting national recognition for all the wrong reasons, Bartolo “Buddy” Valastro is bringing millions of eyes onto Hoboken for the right ones.
The 32-year-old baker’s critically-acclaimed reality show Cake Boss airs on The Learning Channel (TLC) on Mondays at 10 p.m., including a stunning season finale Aug. 17. The show features Valastro and other members of his Italian-American family as they conduct the business of Carlo’s Bakery at First and Washington streets, serving up cannolis, cookies, and their renowned specialty cakes.
Valastro is the star – an “Enzo the baker” for the 21st Century – and stardom came fairly easily. “It’s the number one baking show on television,” he said last week. “2.3 million viewers per week.”
To rev up the drama, Valastro frequently seems frustrated at his staff for dropping cakes or heading to Pier A Park in search of doves. But the publicity has been good: lines have been out the door and business is up.
Except that it takes his time away from his wife and three children, the Cake Boss loves the attention.

In the 1960s, Valastro’s father Buddy Sr., who had been running his family’s bakery on the west side of town, moved operations to an existing bakery on Washington Street and preserved the name of its original owner, Carlo Guastaferro. He also bought the building. Next year, Carlo’s Bakery will celebrate 100 years in business.
The bakery is undoubtedly a family business. Mary “Mama” Valastro, Buddy Valastro, his wife, his four sisters, three brothers-in-law, an aunt, and three cousins work there.
Valastro said in an interview with the Reporter that he has thought about expanding the business on-site, but has not made any headway. The building is in the middle of a historic district on Hoboken’s main street and is surrounded on all sides by other stores.
“Expansion is tough here,” he said, “but I have some ideas.”
He loves Hoboken – even though he lives in East Hanover – and is proud that his father was one of thousands of immigrants who settled here. Valastro remembers the years when people were fleeing Hoboken, an old waterfront leftover with not much to offer.
“Now everybody wants to come back to Hoboken,” he said. “Through it all, Carlo’s was there. I want to let [everyone] know how far this community has come.”
Valastro designed the cake for the New Jersey Hall of Fame induction ceremony last year, and he remembers Jon Bon Jovi’s passionate speech.
“You could see the sincerity in his eyes when he spoke about New Jersey,” he recalled. “That’s me with Hoboken… It’s like a miniature Manhattan.”

Valastro recently started shooting the show’s second season, expanding from 13 episodes to 18. For Season 2, he said, the crew will be doing more travelling, but he couldn’t reveal locations.
Right now, the bakery has attracted people waiting just to get a picture with the boss himself.
“I don’t like to talk numbers, but business has definitely increased,” he said. “I can’t believe the amount of foot-traffic.”
Of all the cakes Valastro has crafted on the show, he said the finale’s masterpiece is “the most amazing cake we’ve made.”
The cake depicts a Manhattan skyline and New York harbor scene, but he was asked to include the Brooklyn Bridge. For a man who’s trying hard to put Hoboken on the map, ignoring the Jersey coast as part of the scene didn’t work. Solution?

“We made [the cake] bigger to fit Hoboken,” he said. The scene includes 15 different buildings, Valastro said, and an edible fireworks extravaganza.

His television audience has come to know Valastro for outbursts and tirades in the confines of the shop.
“We’re Hoboken!” he said in response, almost reveling in the foul-mouthed traditions of the longshoremen who populated the town years ago. “We yell and scream, but for the most part I’m a great guy.”
And for the conspiracy theorists out there, Valastro said the show is – for the most part – spontaneous.
“It’s not really staged,” he explains. “They don’t produce it that way.”
Pranks – like throwing flour from the roof – were already time-honored traditions at the shop. “I’ve been doing that for years,” he said.
But for the show, these plans are hatched behind the scenes with producers so that the cameras are ready to roll.
One thing is certain: the mark is never let in on the secret, Valastro said, or else the whole prank would be a farce. “It’s choreographed, not staged,” he said.
Is there any rivalry with the Food Network’s baking show “Ace of Cakes,” which is going on its seventh season?
“What separates me from him is, we’re a bakery,” Valastro points out. “[At his shop], you can’t walk in and get a cupcake.”
The “Ace of Cakes” Baltimore facility is an order-only bakery with no walk-in customers. It’s run by bald-headed chef Duff Goldman and his staff of artists. They do not allow tourists to stop by.
At Carlo’s Bakery, a customer who walks in for a coffee and cannoli can often meet Valastro. “Come see the star of the show,” he invites.

Valastro is undeniably an artist, but what most people don’t understand, he said, that it is actually two arts he’s mastered: the art of baking and the art of edible decorating.
He takes pride in the baking process. “It’s almost a lost art,” he said as he denounced all box and bag mixes in favor of his raw ingredients and an attentive palate.
After baking, his imagination and well-practiced techniques take over. Many times, this leads to micro-management of every specialty cake that goes out the door.
He never uses Styrofoam in his creations; every detail, small or large, is edible. “Real bakers only use Styrofoam for window displays,” he said.
“If I put my mind to something,” he added, “I usually accomplish it. It’s a drive that comes from within.”
The skills were passed down by his father, Buddy Sr., who passed away in 1994. Buddy Jr. was brought into the bakery to keep out of trouble when he was 11 years old.
Since then, the younger Valastro has been honing his craft.
Recently, Valastro made a cake for newly-inaugurated Mayor Peter Cammarano, just three weeks before Cammarano was arrested in an FBI corruption sting.
The cake, Valastro said, was a gesture to a new mayor, not an endorsement.
“I always stay politically neutral,” he said.
Political or otherwise, Valastro is now one of the most famous Hobokenites ever. This fact does not escape him.
“I promise to make Hoboken proud of me,” he vows. “We’re proud, and I hope the neighborhood is proud, too.”

Timothy J. Carroll may be reached at tcarroll@hudsonreporter.com.