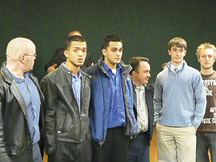 For the last 10 weeks, Brian Charles has been a young man on a quest.
The rising high school senior and Bayonne resident has been beating the pavement looking for Help Wanted signs.
“Almost every summer, I’ve worked,” he said last week, taking a break from his hunt. He said he has tried to get work as a dish washer, delivery man, salesperson, stock boy. “June’s half over and I’ve found nothing,” he said.

Analysts who follow national employment trends fear this summer could be the worst ever for teen workers.
________

Analysts who follow national employment trends fear this summer could be the worst ever for teen workers. According to a study by the Center for Labor Market Studies based at Northeastern University, the national employment rate for teenagers ages 16 to 19 could be as low as 30 percent. By comparison, more than 46 percent of people in this age group found summer jobs in 2000.
Around Hudson County, summer work for youth appears to be something of a mixed bag. Municipalities and local businesses have hired young people within the past year, but the recession has had an effect.
“We really haven’t made any significant cuts,” said Secaucus Recreation Director John Voli. “I’d say we have about the same number of kids this summer as before. I just have to work within the budget they give me. That means kids may not always get the hours they’ve gotten in the past. I may have to give people fewer hours [of work] to make sure we employ the same number of people.”

In the private sector, a similar story

“Most of my employees are high school kids, college students, and recent [high school] grads,” said Jeremy Scott, manager of a coffee shop in Jersey City. “I’m employing the same number of people I did before. But I’ve had much less turnover over the last year. Normally, I’d be doing a lot of hiring because people come here, work eight months, a year, then they find something else or go back to school. This year I’d say kids are staying here longer ’cause they haven’t found anything better. People have come in here looking for work this summer. But just about every employee who was here in September is still here now.”
Union City resident Dominique Reyes said she has worked only sporadically since graduating from high school in 2008.
“I’d love to find a full-time job,” she said. “I want to go college. I wanted to get a job, work a couple years, save up a little money. Then go back to school. But I haven’t found anything. I went to a job fair with my cousin [in February]. It seemed like everybody there was in their twenties. And a lot of them already had a college degree or at least an associate’s.”
Reyes added that since graduation she has done occasional babysitting and odd jobs for neighbors and family friends, “but nothing you could live off of.” Her dream of going to college in 2010, she said, is now “on hold.”

The loss of real-world work experience can have long-term ripple effects, said Ben Lopez, director of the Hudson County Department of Family Services.
“The teenage years really are a critical time when kids should be learning about the world of employment and gaining basic work skills,” Lopez said last week. “When the opportunity to gain those skills is lost or delayed, it can also delay a young person’s ability to enter the workforce and earn good wages.”
Lopez, who has managed the Hudson County Summer Youth Program since 2003, said he has had to downsize the program as private funding for the initiative has dropped. Each year the program is jointly funded by corporate donations and tax dollars from the Temporary Aid to Needy Families (TANF) program. Last year, Lopez said, corporate donations topped $130,000, which enabled him to hire 120 teens ages 14 to 18. During the six-week program, the teens primarily worked at community-based organizations, nonprofit groups, or government facilities. A few worked in parks or such facilities as the Liberty Science Center in Jersey City.
However, due to recession-related cutbacks at many companies that have supported the program in the past, Lopez said he’ll be lucky to get $60,000 to $70,000 in corporate contributions this year.
“Clearly that is going to cut down on the number of youth that we hire,” he said.
Stimulus money from Washington may soften the impact of these cuts. New Jersey will receive $56 million this year for training and employment services under the American Recovery and Reinvestment Act of 2009. Some of this money has been specifically earmarked, Lopez said, to help high school dropouts and unemployed adults ages 16 to 24 make the transition into the workforce. Hudson County expects to hire about 640 people for an eight-week job program with some of this stimulus money.
Such programs, however, target “at risk” or “hard to employ” youth, leaving hundreds of others, like Brian Charles, to fall through the cracks.
“I just want, like, a regular job in sales or waiting tables,” Charles said. “I’m pretty sure I don’t qualify for some of those programs they got out there. My family ain’t rich, but we ain’t poor, either. I just want to see a ‘Help Wanted’ sign, fill out my application, and get a job. Is that asking too much?”
E-mail E. Assata Wright at awright@hudsonreporter.com.