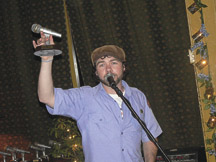 Musicians won prizes like golden microphones and free studio time at an event called the “Hoboken Music Awards” last Saturday night, but organizer Dave Entwistle said there were no winners at this year’s event – only “recipients.”
More than 50 bands were considered in a number of categories like Best Local Band, Best Children’s Band, and People’s Choice. The awards demonstrated the supportive community Entwistle and others have fostered at the Goldhawk, 936 Park Ave. in Hoboken, over the past few years.
“I thought there was going to be more nominees than people actually here to listen to live music,” Entwistle said, “but I was wrong.”
Hundreds of fans and friends flooded the cozy back room at the Goldhawk, which was filled with oversized couches and candle-lit tables.
Ten awards were presented to bands and musicians from Hoboken and the surrounding areas. Gibby from the band High Speed Chase was on hand to receive Best Hard Rock Band.
“The honor of receiving this award is just [expletive deleted] amazing,” Gibby said. “One of the greatest releases in the world is being able to play your music and let an audience soak it in. We all deserve accolades.”
After a successful night, Entwistle is already looking forward to the future.
“I don’t want to wait for another year to go by,” Entwistle said. “I’m dreaming up something for the end of the summer to say [to musicians], your work is not for nothing, that we’re listening.”
For more information on the Hoboken Music Awards, visit www.myspace.com/hobokenmusicawards.

Sean Allocca can be reached at current@hudsonreporter.com