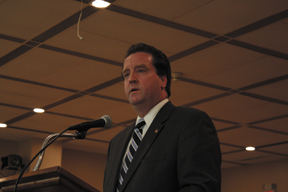 The Port Authority of New York and New Jersey has agreed to withdraw its lawsuit against the Bayonne Local Redevelopment Authority, which challenged the 2007 sale of land to a company called PortsAmerica.
The Port Authority wanted the land, which is in the redevelopment area that used to be the Military Ocean Terminal of Bayonne. In fact, in 2007, Bayonne agreed to sell 90 acres of it to the PA for $50 million. However, using a technicality, Bayonne canceled the agreement to take the more lucrative $90 million from PortsAmerica.
The Superior Court ruled Bayonne was within its right to do so.
After losing the case, the Port Authority appealed the decision to the Appellate Division, whose decision was still pending at the time the suit was dropped.
Port Authority officials said the move was made to improve relations with Bayonne. City officials said meetings with Gov. Jon Corzine and others helped heal the wounds between Bayonne and the Port Authority.
In a joint statement released on March 19, Bayonne Mayor Mark Smith and BLRA Executive Director Chris Patella announced the end of the lawsuit.
Patella said the Port Authority’s decision comes at a critical time, allowing the BLRA to refinance about $31 million in past debt, which is just coming due. Patella said despite the fact that the BLRA has prevailed in court, the lingering lawsuit could have kept banks and other lenders from doing business with the city, putting the BLRA in a bind. The debt restructuring, which was approved at the March 19 BLRA meeting, also provides about $6.5 million for improvements to the former Military Ocean Terminal.
Smith said the Port Authority agreed to withdraw its lawsuit after a series of “amicable and productive” meetings, including discussions with the mayor, his staff, the Port Authority, and state officials.
These meetings, Smith said, began immediately after he was elected last November, fulfilling his pledge to resolve the issue as soon as possible.
Smith said the conversations immediately bore fruit after he opened a dialogue with Susan Bass Levin, deputy executive director of the Port Authority.
“Susan understood the importance of the conclusion of this transaction to the people of Bayonne,” Smith said. “As a former mayor herself, she empathized with our plight and worked with us to conclude the litigation.”
Smith said Gov. Corzine and his staff, Port Authority Chairman Ton Coscia and Assemblyman Joe Cryan also assisted in helping move the issue.

“It kept me awake at night because I knew that, without resolution, we could not move forward.” – Mark Smith
________

The ending of the lawsuit will allow PortsAmerica to move ahead with the actual purchase of the Maritime District, which was put on hold until the suit was settled.

“On the night I was elected mayor, the one thing that was on my mind was the lawsuit with the Port Authority. It kept me awake at night because I knew that, without resolution, we could not move forward,” Smith said. “I was concerned about the cost of the litigation, which was growing everyday. It was absolutely critical that we stop the hemorrhaging. In the early days of my administration, we decided that the resolution of this matter would be our number one priority. I asked the BLRA board to approve Chris Patella as their executive director because I knew he had the experience to help get this matter resolved.”
He added, “As everyone here knows, the Port Authority litigation has overshadowed everything else we do in municipal government because the lawsuit stood in the way of all other progress we hope to make. Knowing this, I specifically asked the Port Authority to dismiss the lawsuit. Without a completed sale of the Maritime District, we cannot finalize our municipal budget. Without a completed sale of the Maritime District, we cannot progress with other development at the Peninsula. The conclusion of this litigation now opens the way for Bayonne to move forward.”
Currently leasing the property, PortsAmerica is expected to close the transaction immediately.
“Our new relationship with the Port Authority will serve us well as we work together to address future economic development issues and regional management of overall port commerce activity,” Smith said. “Bayonne is at the heart of the Port Authority’s service area and we are looking forward to a collaborative working relationship in the best interest of Bayonne and the region.”

The BLRA introduced its budget at the March 19 meeting. The $111 million budget is up from $65 million last year and reflects about $54 million in capital improvements to the MOTBY, such as the construction of roads, sewers, electrical and other improvements.
A public hearing and possible passage of the budget is scheduled for April 16 at 6 p.m.