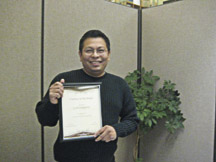 Hudson Reporter Circulation Coordinator Luis Vasquez is a guy who rarely says no.
“That’s how willing and able he is,” said his boss, Circulation Director Roberto Lopez, last week. “I’ve said to him, ‘You can say ‘no’ to some things.’ ”
Vasquez, who is on the front lines of circulation for the Reporter chain’s more than 100,000 print newspapers, was named the company’s first “Employee of the Month” last week. Colleagues cited his quiet dedication and his good-natured, giving personality.
“He is a hard-working man, and I feel he deserves recognition,” wrote one colleague who nominated him.
Vasquez spends his week talking with store owners and building managers to make sure circulation is going smoothly. He also handles many other tasks, including managing the stately building in Hoboken that serves as the Reporter’s headquarters.
The new Employee of the Month program was developed this year to recognize hard-working employees. All of the company’s employees were allowed to nominate a colleague.
Several employees commented on Vasquez’s quiet and dedicated nature.
“He always has a smile on his face,” wrote one employee, “and never complains no matter how much is asked of him.”
But his life wasn’t always easy.

From 1980 to 1992, the United States-allied El Salvadoran government battled with left-wing guerillas in a deadly civil war. In the late 1980s, Vasquez’s father, a member of the Salvadoran military, got a warning that his family was in danger. He sent Vasquez and his sister to the United States.

.
Vasquez came to live in Hoboken. It was approximately five years later that he heard about a job at the Reporter from a friend in the circulation department, and began working here. He and his family eventually moved to Jersey City.
Vasquez’s wife, Mirna, works for the Reporter part-time, dealing with delivery and inserts. They have two children: Luis Jr. and Denise.
About receiving the honor of employee of the month, Vasquez said, “I’m very happy about it and I’m surprised. The only thing is for me to try to do my best.”
He added, “Being recognized in this manner encourages me to continue doing everything I can to help the Hudson Reporter in the future and continue doing my job as it should be done. I would like to thank the staff for being very kind and helpful to me. I have nothing but respect for everyone at the company.”
“He’s just an unassuming, quiet guy who does a lot of good,” said Reporter Co-Publisher David Unger.
If you have comments or suggestions regarding Reporter circulation, you may call Roberto Lopez at (201) 798-7800.