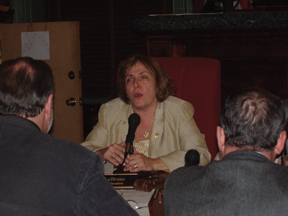 Councilwoman Terry LaBruno and resident Donna Antonucci had a shouting match at Wednesday night’s City Council meeting, regarding Antonucci’s detailed suggestions to cut the Fire Department budget. In light of the city’s 47 percent tax hike, many taxpayers have been looking for ways to make cuts.
Antonucci used her allotted five minutes to speak publicly at the meeting, but then pleaded with the council to have her time extended.
Supporters yelled that she should be able to speak longer, while Council President Nino Giacchi tried to move things along, since he usually does not grant extensions.

Friction caused by the content of Antonucci’s proposal – which included demotions – and her reluctance to give up the floor caused LaBruno to verbally explode from the dais. LaBruno’s husband is a Fire Department battalion chief.
“I’ve watched my husband body-bag children,” LaBruno yelled. “Lives are not numbers.”
LaBruno jumped from her seat as she spoke, and Antonucci continued to shout out from the audience. Two police officers approached Antonucci.
Both LaBruno and Antonucci were told they would be removed, and finally settled themselves.
LaBruno later apologized: “I should have no right to say anything in response to what Donna said.”
Video of the exchange was posted Thursday on the Reporter’s new website, so go to www.hudsonreporter.com and click on “See more up to the minute news.”

Permit fee may be reduced

Under the guidance of state-appointed Fiscal Monitor Judy Tripodi, the council is trying to raise more revenue for the city, but without hurting constituents first. So given the choice, the council is now choosing to increase parking fines in order to rescind a recent residential parking permit increase.
Tickets for overtime parking meters went from $20 to $30 as the council voted unanimously to increase parking fees as a way to avoid the permit hike. Other penalties also increased. The council will now work with Tripodi to rescind the resident permit hike, they said.
Parking Utility head John Corea said he will offer residents a credit or refund if they’ve already paid extra for a new permit.

No job for finance director yet

The council tabled a vote on an ordinance to create the position of director of the Finance Department. This position had already been filled by Nick Trasente, a former colleague of Tripodi, but the ordinance needs to pass for the position to exist. Tripodi does not have the authority to pass ordinances, so the council must approve the position.
Council members said they were poorly informed of the nature of the position before the vote, and tabled it until some questions can be answered by the administration.
Councilwoman Theresa Castellano also said on Friday that the city never found a councilperson to sponsor the ordinance and that it never should have been on Wednesday’s agenda.

Comments from the public at the meeting

At each council meeting, residents are given the opportunity to comment on ordinances or bring up new issues. Each speaker is limited to five minutes to keep the meetings to a reasonable hour.
Resident Toni Tamarazzo, who is working with Donna Antonucci to find ways to save money in the city, has been investigating an ongoing situation with city tax abatements for old moderate income buildings. For instance, the city is considering renewing a tax deal for the owners of the Church Towers building on Willow Avenue, and there is some confusion over whether the rents will stay affordable if the agreement is not extended.
Tamarazzo said that the Church Towers situation – which will come up for a vote at a future meeting – is just the tip of the iceberg.
“We have bigger fish to fry,” she said, before pointing out that the city didn’t even begin to look at the Church Towers abatement expiration until after she had brought it to the city’s attention.
Charles Mancini, whose remarks many times strike a familiar chord with other residents, tried to put to rest a debate about the legitimacy of those who voted against getting a state budget waiver last year, a vote that paved the way for the state to appoint Fiscal Monitor Judy Tripodi.
Mancini’s statement came in response to Councilman Peter Cammarano’s criticism during the meeting of the council members who voted down the waiver last year. The waiver would have allowed the city to approve a budget that exceeded the state spending cap.
Cammarano has repeatedly blamed the five council members who voted against it for causing the state takeover and subsequent tax increase.
Cammarano is likely to run for mayor in May.
“You say it as though we’d be in a better place [without state intervention],” Mancini said. He noted that before the state intervened, the administration was ignoring directives from the council including a spending and hiring freeze.
“I don’t think it’s such a bad thing that we have someone in here taking a close look at how we do business in Hoboken,” Mancini said.
He and Cammarano agreed to disagree, but the councilman took the opportunity to opine again on the subject.
“I do believe we would have been better off,” Cammarano said. He claimed the city would only have been hit with a 7 percent tax increase this year instead of 47 percent if the council would have allowed the overspent budget to pass and retained control of the city.
Mancini responded, “I was proud of the way council acted with that vote. It was the hardest vote, I think, that you ever took on.”
Several residents complained, as they have at recent meetings, about the lack of information on the meeting that was provided by the city on its website. Also, a few residents brought up concerns that the city was not responding to public information requests in time or at all. – TJC