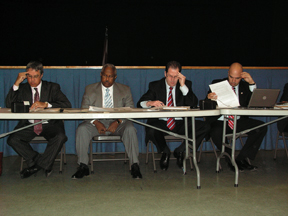 An ordinance doing away with the deputy police chief positions at the Union City Police Department was passed at the Board of Commissioners meeting on Tuesday at Jose Marti Middle School.
Union City Mayor Brian Stack said the change will save the city approximately $300,000 yearly. That number includes the salary, pension, benefits, and other costs associated with the position, he said.

“What we have tried to do is streamline all departments, especially the Police Department.” – Mayor Brian Stack
________

Stack added that the city has been trying to save money where it is possible, especially in the current economic climate.
“What we have tried to do is streamline all departments, especially the Police Department,” said Stack. “At one time, Union City had two deputy chiefs. Then, we were down to one. This will eliminate the rank of deputy chief with the emphasis on putting more officers out on patrol.”
Stack also said he has worked closely with Police Chief Charles Everett to save money and make the department even more effective. He added that with the savings, the department may be able to put five more police officers on patrol.
The mayor also mentioned that Deputy Police Chief Joe Blaettler recently retired.

The commissioners also discussed the emergency response to the recent U.S. Airways plane crash into the Hudson River. Several members of the Police Department, along with the mayor, were at the scene on the New Jersey riverbank. Firefighters from the regional department and other emergency personnel also helped in the rescue effort.
“To see everyone come together makes you really feel good about living in the area, living in the country that we live in,” said Stack.
An individual who responded to a separate emergency situation was also recognized at the meeting. Angelica Mercado, the North Bergen resident who rescued a man from a burning oil tanker last November, received a senatorial citation from the mayor, who is also a state senator.