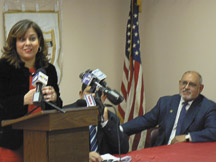 In just a month, televisions across the country will convert to a new kind of broadcasting, leaving people only a few options to make sure their sets still work – and some are unprepared.
Newly elected Pres. Barack Obama has asked the FCC to postpone the Feb. 17 date in which TV broadcasts will change from analog to digital, since there is a waiting list to get government vouchers for $40 for the $60 digital converter boxes, and since some people have not figured out whether to buy a converter or subscribe to cable so they can keep receiving TV.
In Jersey City last week, Lydia Rodriguez-Lopez, president of the New York-based non-profit called the Hispanic Federation, said at a press conference that there are 21 million households in the United States unprepared for the transition, with eight million of them senior citizens.
Viola Richardson, a councilwoman in Jersey City, said, “I am worried about seniors being shut off from the only entertainment some of them may have.”
There are three options to keep receiving television after Feb. 17:
-Subscribe to cable or satellite TV
-Buy a new kind of television that receives digital broadcasting
-Buy a converter from a local drug store or electronics store. However, they do not always work if your antenna does not work well. In addition, there is currently a waiting list for the government vouchers that take $40 off the $50-to-$70 price of the converters.
Senior citizens in West New York and other areas noted in the press recently that the converter boxes don’t always work if the buildings’ TV antennas are not up to par, and some people cannot afford monthly cable fees.
The area’s cable companies are offering low rates for new customers (see sidebar). In Hudson County, most residents are served by one of three companies: Comcast (Jersey City, Secaucus, Harrison, Kearny, East Newark), Cablevision (Hoboken, North Bergen, Union City, Weehawken, West New York, Bayonne) and Time Warner (Guttenberg), or they have a satellite dish.

“I am worried about seniors being shut off from the only entertainment some of them may have.” – Viola Richardson
________

Comcast was one of the organizers of the press conference held at the PACO (Puertorriquenos Asociados for Community Organization) headquarters on Manila Avenue in Jersey City last week to get Hudson County residents ready.
Even if Obama has asked the government to postpone the transition, Charles Smith, Director of Government and Community Affairs for Comcast, said that the public should still prepare for the transition with the Feb. 17 deadline in mind.

Let’s get digital
Hudson County Freeholder Eliu Rivera, who is also the head of PACO, estimated before the press conference at least 20 percent of low-income tenants in two downtown Jersey City buildings do not have cable.
Healy recommended that people who obtain a voucher but already have cable or satellite should give the voucher to someone who needs one. However, the vouchers are good for only 90 days, so an old voucher will not work.
City Councilman Mariano Vega spoke both in English and Spanish as he showed off the converter box needed for TV’s that do not have cable. He also prompted the public to go out and spread the word about the transition.
“It’s important to get our message out to our local bodegas, to our local barber shops … to make sure we are not left out in the dark,” Vega said.
After the press conference, City Councilwoman Viola Richardson, who represents the Bergen-Lafayette section of the city, said she knows that many seniors who will be impacted by the transition. She said she plans to go purchase converter boxes to give out.
Richardson’s initiative would follow in the footsteps of former West New York resident Rosa Abreu, featured in a December article in the West New York Reporter. Abreu bought and delivered converter boxes to 15 seniors living at the West New York Housing Authority’s FDR Building.

Offers for cable and converter boxes

Here are some ways to get your TV converted for digital broadcasting:
– Consumers may buy a TV converter box to receive digital broadcast signals. It plugs into most modern TV sets. The government offers coupons for $40 off, but there is a wait list. For information on the coupons, call 1-888-388-2009 or visit www.dtv2009.gov. Also check local electronics stores to make sure they have the converter boxes in stock.
– Some cable and satellite providers are offering discount cable service to help people make the digital transition. Comcast is offering until Feb. 17 basic cable service with up to 30 channels for $10/month for a full year (not including the $25 installation and other franchise fees). Comcast spokesperson Margo Ferro was asked how many people have signed up since the program was unveiled in October, but Ferro said the company does not provide those numbers due to competition with other cable service providers. For more information on this special offer, call 1-800-COMCAST or visit www.comcast.com. Cablevision has an ongoing offer for a “Broadcast Basic” package for $13.26/month with 44 channels (not including $34.95 installation and other fees). For residents without cable living in towns served by Cablevision, call (201) 436-2500 for Bayonne, and for other Hudson County towns call (201) 798-6060 for more information. – RK