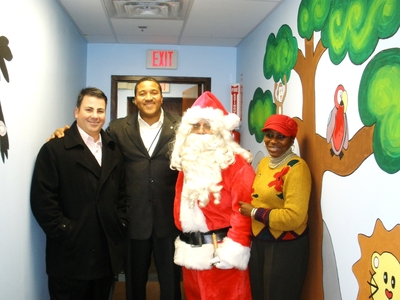 According to Assistant U.S. Attorney Ronald Wigler, Luisa Medrano, a Hudson County bar owner who pleaded guilty to a role in an international human smuggling ring in 2006, was granted probation by U.S. District Judge Joel Pisano in Trenton on Jan. 14.
Medrano admitted to harboring illegal aliens in three apartments that she owned as early as 2004. These women were required to work off their smuggling debt, which ranged from $10,000 to $20,000, by working six days a week from 6 p.m. to 2 a.m. at three bars owned by Medrano, according to a United States Department of Justice press release in 2006. At Medrano’s bars, El Paisano, Puerto de La Union I, and Puerto de La Union II in Union City, the women would make $240 per week plus tips. The women, who included at least four juveniles, would get male patrons to buy them drinks and would dance with them for $3, according to prosecutors.
Wigler said that because Medrano cooperated by testifying against former Guttenberg Mayor David Delle Donna and his wife Anna, her original sentencing range of 24 to 30 months was reduced. Medrano was the main witness in the corruption case, in which she claimed she gave the couple thousands of dollars in cash and gifts in return for preferential treatment in Guttenberg. Last week, the Delle-Donnas began serving their 51-month sentence in federal prison.
Medrano will spend six months on house arrest and will be on probation for the next three years, said Wigler. He said she has also paid the $250,000 of back taxes and will have to pay approximately $3,900 of restitution.
As a part of her original plea deal, Medrano lost two of her apartments. She pleaded guilty last week to a lesser tax evasion charge as well, according to Wigler.
“None of the victims had indicated that Ms. Medrano in any way forced them to do anything or mistreated them, unlike several of the other co-defendants of this case,” said Wigler.

A ccording to North Bergen Police, Anthony Vainieri, Jr., the confidential aide to Mayor Nicholas Sacco, was in a minor accident on Jan. 9 at 12:50 a.m. in a city vehicle.
Vainieri got into a “fender bender” at 85th Street and Bergenline Avenue with a small commuter bus, North Bergen Traffic Division Commander Lt. Jimmy Summers said last week. He said that the driver of the vehicle went to the hospital for a “complaint of pain,” but that there were no injuries.
Vainieri was driving a township vehicle, a black four-door black Ford, said Summers.
According to North Bergen Spokeswoman Ruth Villalonga, as the confidential aide to the mayor, Vainieri has 24/7 access to the township vehicle.

B ook-mart Press, Inc. of North Bergen, one of the Courier Corporation subsidiaries, will close in the next 60 days, according to press release.
Book-mart Press was acquired by Courier in 1997 and has 72 employees and approximately $7 million in annual sales. According to the press release, severance expenses and other related costs will be around $2 million over the next two quarters.
Courier was forced to close Book-mart because of the economy and because it will consolidate one-color printing, which the North Bergen plant specialized in, to its other facilities, the press statement said.
“We deeply regret having to make this announcement at such a troubled time in our national economy,” said Courier Chairman and Chief Executive Officer James Conway III. “Yet it is that very circumstance that has made this action imperative. We appreciate the loyalty and professionalism of Book-mart’s employees through the years, and we are determined to make every effort to help them through this inevitably painful transition.”
Courier Corporation publishes, prints and sells books and has its headquarters in North Chelmsford, Mass.

A local chapter of the National Alliance on Mental Illness (NAMI) is offering a free informational course for those who are close to individuals suffering from mental illness. The Family-to-Family Education Program includes 12 classes, running on Wednesdays, from 6:30 p.m. to 9 p.m. The first course will be held on Feb. 25 at Catholic Community Services, at 3040 Kennedy Blvd., in Jersey City. The classes will be given by NAMI-certified instructors and will cover schizophrenia, bipolar disorder, clinical depression, panic disorder, and obsessive-compulsive disorder (OCD). For more information, call (201) 766-2369.

Ladies and gentlemen, start your engines…

T he New Jersey Auto Show will roll through Secaucus from Thurs., Jan. 22 through Sun., Jan. 25. Organizers of the show promise that a huge selection of new cars, trucks, SUVs, and crossovers will pack the Meadowlands Exposition Center. Attendees can sit behind the wheel and check out hot new cars and trucks without pushy car salesmen trying to make a sale.
Show hours are 5 to 10 p.m. Thurs. and Fri., and 10 a.m. to 10 p.m. Sat., and Sun. Admission for adults is $8, $4 for kids and senior citizens.
Meadowlands Exposition Center, 355 Plaza Drive, Secaucus. For more information, visit www.AutoShowNewJersey.com.