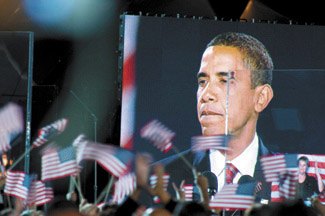 President Elect Barack Obama announced last week that a close advisor in the past, 25-year CIA veteran John Brennan, will serve as his Homeland Security Advisor and Deputy National Security Advisor for Counterterrorism.
Brennan, a North Bergen native, will have the rank of assistant to the president.
“John has the experience, vision and integrity to advance America’s security,” said Obama in a press release last week.
Obama also nominated Adm. Dennis Blair as the director of national intelligence and Leon Panetta as the director of the CIA.
In Obama’s announcement of the intelligence team for his administration on Jan. 9, he stated that Michael Leiter, originally from Englewood, would continue to direct the National Counter-Terrorism Center, “the hub of our efforts to prevent attacks and root out terrorist networks.”
Brennan was the former leader of this center.

Mayor Nicholas Sacco said that Brennan was a student at West New York’s St. Joseph’s of the Palisades, and his wife, Kathy Pokluda, graduated from North Bergen High School in 1974.
“I’m proud,” said Sacco. “It makes me feel that there are a lot of towns that people come from, [and these communities] often go unnoticed until something like this happens.”
Sacco said that he was happy that there were a number of high-ranking North Bergen natives, including former FBI Director Louis J. Freeh.
“We’ll have to see how the team operates,” said Sacco.
Sacco said that Brennan is a capable nominee and that hopefully the administration will be able to work closely together.

Laura DeSantis, who used to be Sacco’s secretary, is a former neighbor of the Brennan family. DeSantis, who now lives in New Mexico, said that she still stays in touch with Brennan’s mother, but hasn’t had the chance to congratulate her on Brennan’s accomplishment yet.
“He was a very bright boy,” said DeSantis. “He’s fluent in Arabic, and I’m sure that was a contributing factor to his position with the Obama administration.”
She said that after Brennan graduated from high school, he went to the American University of Cairo.
“[There he met] one of the other neighbors, Louie Freeh, the [former] head of the F.B.I., in Egypt,” said DeSantis. “They exchanged notes and they found out they had lived on the same block.”
According to published reports, Brennan joined the CIA in 1980, after receiving his bachelor’s degree form Fordham University in 1977 and his master’s in government form the University of Texas.
“I just remember John jumping in my pool,” said DeSantis.