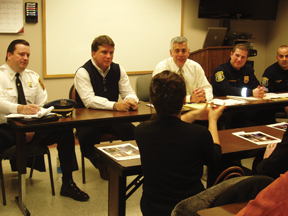 A Fourth Ward resident recently approached police concerned about the rise in violent crime in the area of the Second Street Light Rail station. After researching the matter, police determined that the complaint was valid and invited a group of residents from the area to police headquarters for a small community meeting last week (pictured above).
According to police records, eight incidents occurred in the area since October 2008 resulting in 10 arrests, including four arrests pertaining to a Nov. 28 homicide at Fourth and Harrison streets. Police said most of the arrests were Jersey City residents.
At the meeting, police discussed many initiatives they will pursue, including increased patrols for the area, working with PSE&G to increase street lighting, and establishing a multi-jurisdictional effort that includes NJ Transit police.
Fourth Ward Councilwoman Dawn Zimmer attended, and is eager to begin the creation of a community block watch group in conjunction with the newly-reinstated Hoboken Community Policing team.
Frances Jennings, the resident who sparked the meeting, said, “The response from the police department was just wonderful.”
Just last week, another violent attack occurred at 310 Jackson (see below).

N ot long after a brawl broke out at a Hoboken High School basketball game last Friday, Jan. 9 (see Police Beat), four residents were attacked by a group of 15 to 20 males in the area of 310 Jackson St.
Police arrived on the scene at 11:57 p.m. and found one victim unconscious, although he gained consciousness shortly after.
Two of the victims were able to flee the group. The victims said some of the attackers were carrying baseball bats, according to police.
Two others were beaten – one victim was taken to the emergency room – outside 310 Jackson St. before the attackers fled south toward the Second Street Light Rail station.
Police said they were unable to determine whether the attack was related to the brawl at the high school, but Lt. Det. Charles Campbell said they are still investigating the matter.

C ouncilman Peter Cammarano held a press conference last week in response to an e-mail circulated by Hoboken resident Donna Antonucci.
As part of proposed budget cuts, Antonucci noted that the city could consider the Hoboken Public Library, 500 Park Ave.
State laws require the city to fund the library, although the city was underfunding the establishment before Fiscal Monitor Judy Tripodi increased the support from $2.7 million last year to $3.1 million this year.
Because of the underfunding, the library was forced to cut back weekend hours and weekday evening hours in October, due to an inability to pay for sufficient staff.
Increased funding has now allowed the library to hire more staff and restore hours.
Cammarano said closing one of the oldest civic institutions in the city is a “dangerous idea, one that should be avoided at all costs.”

Council may not vote on Church Towers

A measure to extend the tax abatement for affordable housing at Church Towers, adding another ten years to the 40 years already expired, may not make its way to the City Council this week.
The City Council is scheduled to meet this Wednesday, Jan. 21 at 7 p.m. in City Hall and the agenda does not include a vote on the extension. However, that can still change.
The measure was removed from the agenda at the previous meeting so that the administration could further examine the situation.
Councilman Michael Russo, who lives in the affordable housing building, is claiming that the rents could double or triple if the plan is not renewed.
Critics are wondering why the building needs an abatement plan since it already receives internal subsidies from the state.
PILOT plans allow building owners to make tax payments directly to the city in lieu of paying conventional taxes to the county, schools, and city.

R egistration for spring classes at Hudson County Community College has begun. Classes start Friday, Jan. 23 and end on May 18. For more information, please call the Office of Enrollment Services at (201) 714-7200. Students who have earned 30 or more college credits are eligible to register online at www.hccc.edu.

O n Friday, Jan. 30, the Hoboken Rotary Club will host its annual art auction at All Saints Episcopal Church, 7th and Washington streets, beginning at 7 p.m., with the auction following at 8 p.m.
The event will benefit the Hoboken University Medical Center and the Rotary Club.
All artwork is custom framed and matted, and opening bids are up to 50 percent less than traditional framed gallery prices, according to a press release.
Tickets are available for $10 per person and $15 per couple. For more information, call (201) 441-3994.

D ue to budget constraints, the crosstown bus service provided by the city will cease operations as of Feb. 1, according to city officials.