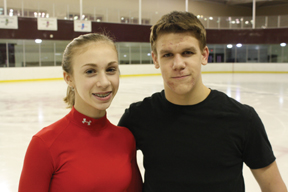 The cold hits you the moment you walk into the Richard Korpi Ice Rink behind Bayonne High School, where students go through their routines, learning ice skills that allow them to compete in hockey or figure skating.
Although the fully-enclosed, temperature-controlled rink serves as home field advantage for the Bayonne High School hockey team – the Bayonne Bees – the rink also hosts a full range of ice related activities open to Bayonne residents and non Bayonne residents alike, including: open public skating sessions, learn to stake programs, and a variety of figure skating programs.
But for two Bayonne High School students who skate toward one side of the large oval of ice, this has been the training ground of champions.
Molly Massarelli, who is currently a freshman at Bayonne High School, and Danny Durak, who is in the 11th grade, begin the new year ranked 10th in the nation for paired figure skating after a four-day U.S. Figure Skating Association Junior National Championship tournament in Lake Placid in November.
Skating out of the mists that hover over the rink ice, the pair has not slowed down, continuing their training under the careful eye of their coach, Danielle Sullivan.
“It was pretty tough when we started,” said Durak, who said the duo often trained for more than nine hours a day – although he made a point of saying this wasn’t all on the ice and that the pair rested between sessions. Now the duo trains about 20 hours a week.
Figure skating is an athletic sport in which individuals, pairs, or groups perform spins, jumps, footwork and other intricate and challenging moves on ice. Figure skaters compete at various levels from beginner up to the Olympic level (senior), and at local, national, and international competitions.
Skaters qualify for the U.S. Junior Championships by finishing in the top four at one of nine regional championships held throughout the country in November. Past champions of the event include two-time world bronze medalist and two-time U.S. champion Evan Lysacek, as well as 2008 U.S. silver medalist ice dancers Meryl Davis and Charlie White.
To earn their ranking, the duo had to compete against five other couples during a four-day competition, which also featured more than 300 skaters along the East Coast who sought rankings in a variety of other skating categories.
Pair skating teams consist of a woman and a man who develop routines that include jumps, lifts, pair spins, spirals and other elements.

Judges rank the skaters for technical merit, looking closely at the required elements in their program and overall presentation, giving marks from zero to six – with six being the highest in each.
“I actually do better in jumps in pair skating than I do on my own,” Durak said. “In pair elemenets you jump side by side.”
Massarelli, who is in the ninth grade, said catching her breath is one of the things she struggles against in the cold air.
Sullivan said the two students performed a program that was three minutes long and contained 11 elements.
Although clearly proud of their accomplishments, both students talk about the events in a matter-of-fact manner, talking mostly about how well they work together and how much they learned. Standing on the ice, the duo talks about routines as the echo of other voices fills the vast rink and other students continue to work through routines of their own on the ice – some even waving and laughing as they pass behind Massarelli and Durak.
This is the third year Massarelli and Durak have been competing. Because Durak turned 16 this year, the team had to compete for the first time on the intermediate level.
In the U.S. Junior Figure Skating Championships, the annual event crowns the U.S. champion in the ladies, men, pairs and ice dancing categories in the first two levels of the U.S. Figure Skating competitive structure: juvenile and intermediate.
U.S. Figure Skating is the official governing body for the sport of figure skating in the United States, recognized as such by both the United States Olympic Committee (USOC) and the International Skating Union (ISU). As the governing body, U.S. Figure Skating’s mission is to provide programs to encourage participation and achievement in the sport of figure skating.
Massarelli and Durak compete with the Skating Club of New York, but both said they started in the Bayonne Skating Club.