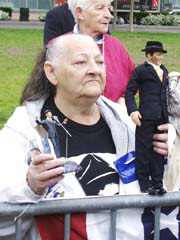 Over 150 dignitaries, VIPs, members of Frank Sinatra’s family, and Sinatra fans gathered at Pier A Park on May 16 to pay tribute to a legendary crooner and Hoboken’s favorite son. At a historical dedication ceremony, the Hoboken Post Office was renamed the "Frank Sinatra Post Office Building."

Nancy Sinatra, Frank’s Daughter, and A.J. Azzarto, his granddaughter who lives and often performs in Hoboken, were the guests of honor.

Sinatra, who recently performed at the Hoboken Art and Music Festival and at Maxwell’s, was on hand to unveil a bronze plaque that will be affixed to the building at 89 River St.

During her speech, Nancy Sinatra mixed humor with sincere emotion when accepting the tribute to her father, who passed away in 1998.

"I have to tell you," she added, "although Daddy was very respectful of the U.S. Postal Service, he wasn’t one of their best customers. He was taught by a certain group never to write anything down." Both of her jokes drew loud laughs and applause from the audience.

She then shifted the tone of her speech to express her heartfelt love for her father and appreciation for the people who made the ceremony possible.

"Thank you for keeping the flame of the greatest entertainer of the 20th century alive," she said. She added that the fact that the ceremony and the post office were in Hoboken "makes the whole experience extra special."

Hoboken Postmaster Arthur Tate, who helped with the unveiling of the commemorative plaque, said that two years of work gathering petitions, having resolutions passed, and gathering community support have been worth the effort.

"We recognize and pay tribute to a great New Jersey entertainer and celebrity," said Tate. "The Hoboken Post Office has always been a big part of this community, and what better way to solidify that partnership than to rename our building in honor of Hoboken’s own, Frank Sinatra."

Tate also gave thanks to Hoboken Postmaster Thomas Corrado for helping to develop the idea and for putting in the effort to make it happen.

Ed Shirak, the founder of Here to Eternity, a west-side museum dedicated to Sinatra, was one of the most active local residents in collecting petitions for the renaming. Working with Corrado, he collected more than 400 signatures. Shirak said that the ceremony was a way for Sinatra to reconnect to the mile-square city.

"It’s like Mr. Sinatra really reclaimed his roots and his relationship to Hoboken," said Shirak. "Talk of a love-hate relationship between Sinatra and Hoboken is now a thing of the past. What we are left with is a wonderful and happy ending."

Also participating in the dedication ceremony were Mayor David Roberts and Rep. Robert Menendez (D-13th Dist.), who was the author of the bipartisan legislation that paved the way for the post office’s renaming.

After having received many requests from constituents, Menendez introduced H.R. 3034, the Frank Sinatra Post Office Designation Act, on Oct. 24, 2001, to name Hoboken’s Main Post Office the "Frank Sinatra Post Office Building." This bipartisan piece of legislation had 16 co-sponsors, including the entire New Jersey delegation. It passed the U.S. House of Representatives, as well as the U.S. Senate by unanimous consent. It was signed into law by the president on Oct. 30, 2002.

Menendez said during the ceremony that he was privileged to be part of the process. "It is an honor to be here today with the family of the late, great Frank Sinatra to celebrate the re-designation of the Hoboken Post Office for one of this city’s most famous and favorite sons," said Menendez. "Mr. Sinatra was not only one of the pre-eminent entertainers of the 20th Century, but also a great philanthropist, believed to have provided millions of dollars to countless charities worldwide. It is a fitting tribute to rename this post office, in the city that started it all, in his honor.

Roberts said during the ceremony that the link between Sinatra and Hoboken is only made stronger with this newest recognition. "This is a community that is bursting with pride for our favorite son," said Roberts.

Ann Thorpe, 75, a lifelong Hoboken resident and devoted Frank Sinatra fan, was at the ceremony with a foot-tall doll of Sinatra dressed in a black suit and fedora. In her other hand was a Sinatra music box that plays "I’ve Got the World on a String."

In her home, she said, she has a whole room dedicated to Sinatra and Elvis Presley memorabilia she has collected over the years. She said that she became a fan of a Sinatra after her mother was a housekeeper for the Sinatra family.

"When I knew him when he was 17, I never knew that he was going to be this famous," said Thorpe. "I’ve have been wishing that they would do something like this for him. It’s really special to me."

Special postmark for next month

Sinatra had one of the most enduring careers in the history of popular music, lasting from his days as a young man in the late 1930s to his last public performance in 1995. He was born on Dec. 12, 1915 to an Italian immigrant couple living in Hoboken. During his career he recorded nearly 1,500 songs released on scores of records and starred in nearly 60 motion pictures often with "Rat Pack" friends Sammy Davis Jr., Dean Martin, and Peter Lawford.

For the next month, fans can have items stamped with a special Frank Sinatra postmark by attaching a first-class stamp to an envelope or postcard they want canceled. Send the items along with a self-addressed stamped envelope to Frank Sinatra-Cancellation, Hoboken Post Office, 89 River St., Hoboken, N.J. 07030. The postmark will be available for the next 30 days.