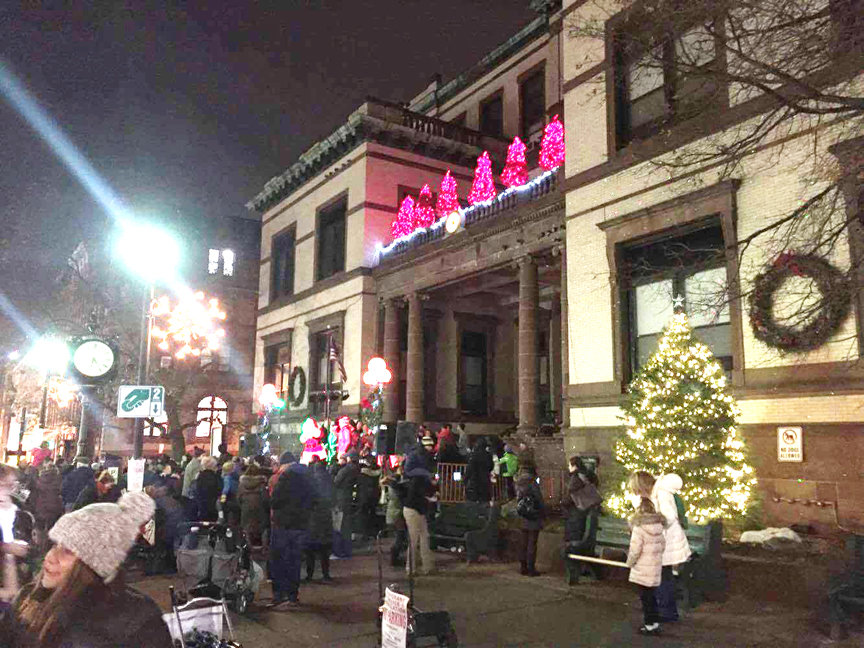 The Reporter’s office in Bayonne will be closed Friday, Dec. 23, Monday, Dec. 26, and also on Monday, Jan. 2. Display ad deadline for the Jan. 1 edition is Tuesday, Dec. 27 at noon.  Display ad reservations may be sent via email to tishk@hudsonreporter.com or ronk@hudsonreporter.com during the days the offices are closed. Voicemail messages related to display advertising only can be left at(201) 798-7800, ext. 603.

This year, police responded to 358 calls between 12 p.m. and 4 p.m. this past Saturday Dec. 17 during the “SantaCon” bar crawl in Hoboken, run by private organizers, according to a release from the police.

Police Chief Ken Ferrante tweeted about incidents throughout the day, including one post that stated that Santas were throwing snowballs from a rooftop. One snowball on Washington Street hit a city director, according to a Tweet, but Ferrante declined to say which director it was last week.

Ferrante said this year was better than last in terms of physical altercations.

“What I noticed that night was hardly any fights of physical bar brawls.” said Ferrante. “We saw more verbal incidents.”

Newark resident Melissa Mendiola, age 26, was charged with driving while intoxicated, reckless driving, and having an open container in a motor vehicle, police said.

Officer Luke Zeszotarski saw Mendiola’s vehicle allegedly almost strike a pedestrian attempting to cross the street. After stopping the vehicle near 70 Hudson St. the officer allegedly smelled alcohol from inside the vehicle. She was placed under arrest after allegedly failing to perform a field sobriety test properly. Zeszotarski found a bottle of Bacardi and another of tequila in Mendiola’s vehicle, the release said. Once at headquarters she allegedly had an alcohol level above the legal limit.

Yahia Fahmy, age 22, of Palisade Park was arrested for obstructing the administration of law and resisting arrest.

According to the media release police were called to respond to someone “acting disorderly” at a pizza place at First and Washington streets. Police spoke with the man in question and escorted him outside. He attempted to reenter. Officers attempted to issue a summons as the defendant allegedly “continued to intervene as they wrote the summons by not remaining at a safe distance away.”

The officers tried to keep him away when Fahmy allegedly grabbed Detective Nicholas Burke by the arm, pushed him, and fled the scene. He was pursued by Burke and arrested.

Ferrante wrote about the incident on twitter posting “Disorderly Santa refuses to give ID to P.O. to avoid summons,pushes the officer and takes off. Taken into custody after three block pursuit.”

Officers responded to a call at a bar at 70 Hudson St. on a report of someone attempting to cut the line to enter the establishment.

According to the release, Nelson was asked to leave and sent away. He later allegedly returned and began to argue with someone, then allegedly struck a planter, causing several chairs to fall, and left the scene.

Police were called to a pizza restaurant on a call of a man attempting to fight others. Officers arrived and were told Shah damaged the pizzeria’s window and fled the scene after arguing over service.

Police arrested Shah a short distance away and transported to headquarters for processing.

PATH line to 33rd Street to reopen this weekend

The 33rd Street PATH train will be operational this weekend starting Christmas Eve according to a press release.

Weekend closures began in August to allow for the installation of new safety and signalization upgrades, new communications equipment and cables, as well as additional repairs and repainting.

During the weekend closures, PATH had been running direct trains between Hoboken and the World Trade Center, and providing shuttle bus service for riders from the WTC to West 29th Street.

These alternative services will stop on weekends starting Dec. 24.

“We are very pleased to be able to complete this phase of the project on time, and we thank our riders for making the best of what was an inconvenience for many of them,” said PATH Director/General Manager Michael Marino.

“New signal systems are critical to PATH going forward,” said Kevin Lejda, assistant superintendent in PATH’s Transportation Division. “PTC and CBTC will reduce the likelihood of human or mechanical errors and provide our customers with an additional layer of safety and reliability.”

Hoboken resident Kyle Tinsley, age 31, was charged with aggravated assault and endangering an injured victim on Friday, Dec. 16 after turning himself in to police that morning.

Tinsley allegedly assaulted a 28-year-old Edgewater resident on Sunday, Dec. 4 while Tinsley was working security at local bar 1Republik, according to a media release from the Police Department. Three of his co-workers were also charged with endangering an injured victim because they allegedly failed to render aid after the alleged assault.

The release says police was dispatched to Third and Hudson Streets on the report of an unconscious male. Off-duty officer Jill Costello was with the victim when the police and ambulance arrived.

The victim was taken to Hoboken University Medical Center and later transported to a trauma center “due to the severity of the injury” to the head.

Then, the Detective Bureau attempted to trace what had happened that night.

According to a press release from the police, “Their investigative effort in tracking down leads as to what may have occurred to the victim, led them to 1Republik…The detectives were able to determine that the victim had been [allegedly] assaulted by the defendant while the defendant was working security at 1Republik. Several staff members were later charged and will be receiving summons complaints for not rendering proper aid to the victim after the assault.”

Three male staff members were charged later with “endangering an injured victim” and summonsed with court appearances for not “rendering proper aid to the victim.”

The general manager at 1Republik was not available for comment by press time.

Plans are already underway to create a temporary 4-acre “pop-up” park so that the community can start to enjoy the benefits of this historic acquisition by this summer.

The planning process for the permanent 5.4 acre “resiliency park,” will start in the new year.

The project will include at least 1 million gallons of underground stormwater detention as well as a large new above-ground parking garage – the first municipal garage in western Hoboken.

The city will be proceeding with the planning, engineering, financing, and permitting for the permanent Northwest Resiliency Park, including the stormwater detention infrastructure and parking garage. The City is also partnering with North Hudson Sewerage Authority to separate the sewer system in the area around the park, build a new stormwater outfall, and construct a pump on-site to channel stormwater runoff from the new underground detention system to the Hudson River.

The purchase of the park property is funded through a low-interest loan from the New Jersey Environmental Infrastructure Fund Program, which includes 19 percent principal forgiveness for the green infrastructure components. The debt for the loan is financed through Hoboken’s Open Space Trust Fund. A Hoboken Parking Utility (HPU) bond is financing the parking garage portion of the land acquisition.

The City of Hoboken will host a public meeting on Thursday Jan. 19 from 7 p.m. to 9 p.m to discuss and develop plans for the temporary “pop-up” park.

The “pop-up” park will be on the newly acquired BASF site.

The meeting will take place at the Jubilee Center at 601 Jackson St.

The park could include potential amenities such as a “multisport field, game center, play equipment, and more,” according to a media release.

The meeting will also provide an overall update on the city’s resiliency efforts according to the release.

“Jim and Karen Raffone started JAR of Hope after their son, James Anthony (“Jamesy”), now seven, was diagnosed with Duchenne in 2013,” states the release.  “There is no cure. And unless one is found, these children will be in wheelchairs by their early-teens. And in graves by their early-20s.”

Urban Coalhouse and JAR of Hope are partnering on a new “$1 Million, 1 Child, 1 Year” campaign to raise $1 million, to fund one Duchenne patient in a pharmaceutical research study.

“A friend introduced me to Jim recently and I was very moved by his story,” said Co-Founder of Urban Coalhouse Pizza & Bar Andrew Cameron. “We’d been searching for the right charitable foundation with which to partner. And JAR of Hope was a perfect fit.”

“Urban Coalhouse is putting its money where its mouth is,” Jim Raffone said. “They donated $5,000 to our JAR of Hope team at the New York City Marathon. They’re getting involved in a wide scope of community fund-raising activities to fight this disease.”

According to a media release, Joseph Genuardi, owner of Genuardi Master Tailor at 300 Observer Hwy won first place in the Quick Pitch Business Competition sponsored by UCEDC a nonprofit economic development corporation and Capital One Bank.

The competition is designed to give “fledgling” entrepreneurs a chance to hone their business ideas with experts.

Only those who have completed the UCEDC’s “Entrepreneurship 101” training program could have participated.

“I became a master tailor by training with the best and I knew I had to do the same when it came to running a business,” said Genuardi in the press release.

Genuardi won $2,000 which he invested into his venture according to the release.

“Small business is the backbone of our local economy-when small businesses do well, jobs are created and communities are strengthened,” said Chris Economides, senior Vice President Business banking at Capital One. “At Capital One, we’re committed to helping small businesses of every size grow and thrive –whether it’s directly through our products and services or through innovative programs and partners like UCEDC.”