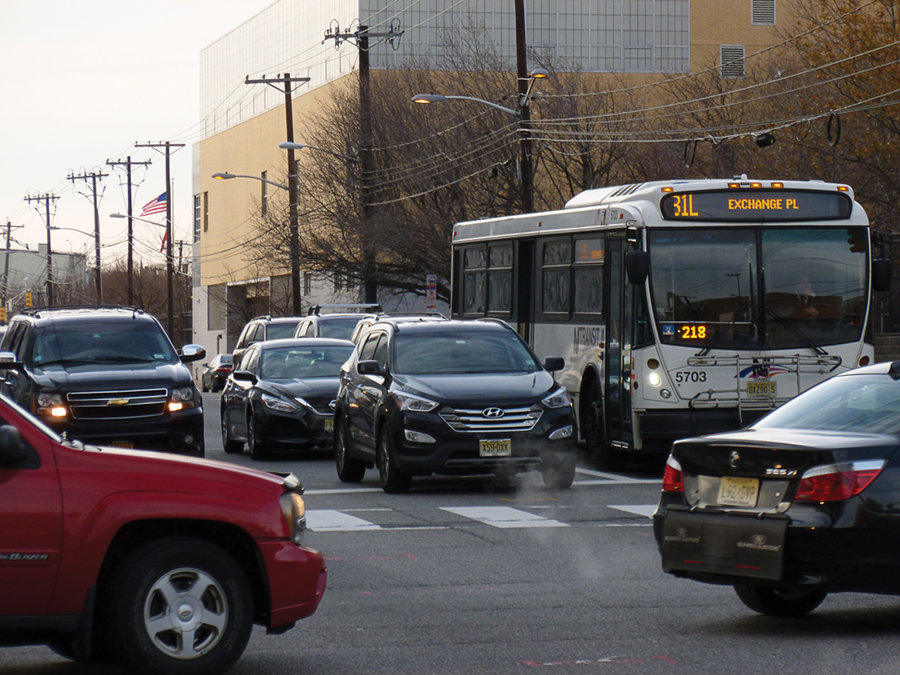 Reducing traffic lanes along Grand Street in Jersey City to provide dedicated bicycle paths may be a mistake, says Rev. Alexander Santora, a long time critic of similar changes recently enacted along Observer Highway in Hoboken.
Earlier this month, Bike JC – a group dedicated to promoting safe bicycle-riding in Jersey City – lobbied the City Council to make changes to Grand Street similar to those made along Observer Highway, a major gateway thoroughfare into Hoboken’s downtown area.
The plan would have the city reduce the existing four lanes to three, with one lane going each way and a center lane for making left hand turns. This would provide room for a dedicated bicycle path.
Bike JC said they used Observer Highway as a model because it had successfully created a safe lane for bicycle riding and reduced dangerous car traffic.
Santora, however, said those changes created more problems than they solved, and suggested the changes were designed instead to discourage car traffic from entering Hoboken from Jersey City.
Santora, who once served as pastor at a church on Grand Street before his current assignment at Our Lady of Grace Church in Hoboken, said Observer Highway-like changes to Grand Street “would be a disaster.”
He did acknowledge differences between the two streets. “Grand Street had a little more breathing room than Observer Highway.”
Santora lived on Sussex Street until about 12 years ago, but said conditions have become more congested in the area.
“There is a hospital there, and additional housing now below Grand Street, high rises and business,” he said. “There is more population and traffic now than then. And this change will reduce the lanes in one of the most congested parts of the city. Most of the people who come to this area from other parts of the state are coming by car. Either you find a way to provide for these cars or stores might as well just close up shop. People do not seem to be thinking holistically.”

What will frustrated drivers do?

Observer Highway, he said, is always backed up with traffic, and the changes to promote bicycle safety may have made it worse.
“You rarely see bicycles using the lanes,” Santora said. “Some people use it to walk.”
The changes add to the frustration of drivers, he said, who often create lanes of their own to get around parking cars, using the turning lane to also make illegal U-turns.
Grand Street with its high volume of traffic coming off the New Jersey Turnpike is already backed up, especially near Jersey City Medical Center and the supermarket.
“I can understand putting bicycle lanes on Christopher Columbus Drive,” he said, referring to a street that runs parallel to Grand Street but four blocks to the north. “That’s wider street and you can put in the lanes without interfering with the traffic pattern. But if you do this on Grand Street it will hurt the businesses.”
This is not an issue on Observer Highway, he said, where there are few businesses.
“Grand Street has more businesses on it,” he said. “Grand Street in one of the most congested areas of Jersey City. You have the turnpike there, and a business community. Where do the cars go when traffic gets backed up? Into the side streets where there are kids and schools. There will be road rage issues, and this has the potential to endanger lives.”
In many cases, bicyclists in the area avoid Grand Street entirely or ride on the sidewalks. Bike JC said bicycle lanes would get people off the sidewalks.
Councilman Boggiano said bicyclists post a number of traffic issues themselves, from riding on sidewalks to running red lights or driving down the middle of the street.
Many, he said, are not using the bicycle lanes already established in the city.
“Numerous parking spaces were taken away,” he said, then added mockingly, “But then in ten years there will be no cars, yeah right.”

For the most part the council members appeared to support the redesign idea, in particular, Ward E Council Member Candice Osborne. She was instrumental in helping to develop the CitiBike Jersey City program. She has asked the city’s engineering department to look into the idea.