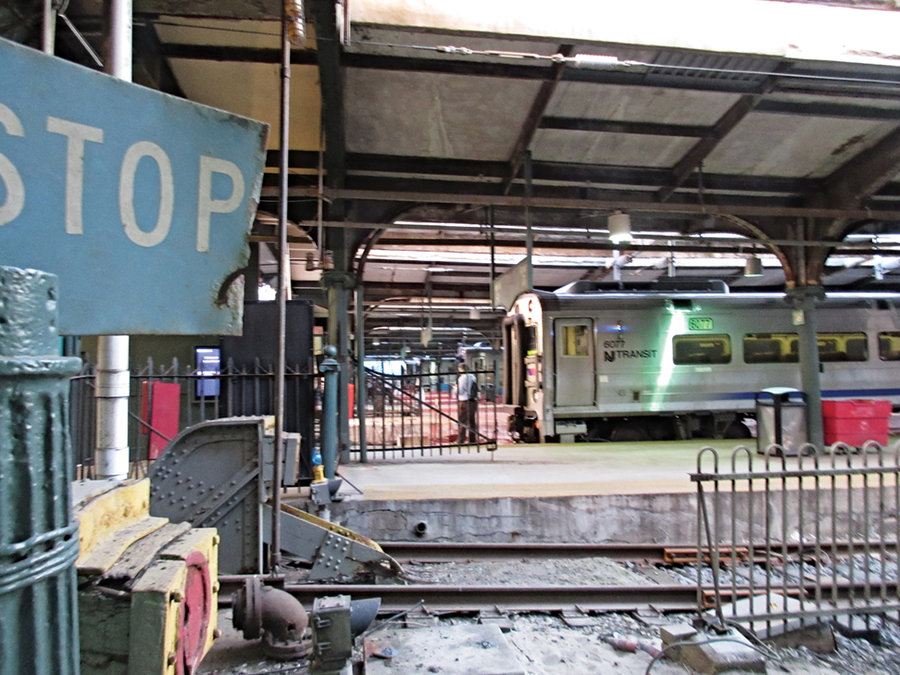 Nearly two months after a commuter train crashed into a platform at the Hoboken terminal, killing a young mother who had just dropped her daughter at day care, the events leading up to the accident remain a mystery.
On Thursday, Sept. 29, around 8:45 a.m., a NJ Transit train from the suburbs failed to slow down as it entered the Erie Lackawanna Train Terminal near the Hoboken/Jersey City border, and crashed into the concrete platform at the end of the line. The collision injured more than 100 people and killed Fabiola De Kroon of Hoboken, 34, who was hit by debris outside the train.
A spokesman for the National Transportation and Safety Board (NTSB) told the Reporter on Sept. 30 that the federal agency would not have a final report or answers for the public for at least a year after the crash.
The agency has been investigating since then, and has released some preliminary findings that contradict the train engineer’s recollection of that morning.
The train’s engineer, Thomas Gallagher of Morris Plains, who worked for NJ Transit for 29 years, said in interviews with the NTSB that he did not remember the moment of impact, but that the train was going 10 miles per hour (the speed limit) when it entered the terminal.
But on Oct. 13, the NTSB released a four-page preliminary report that contradicts this recollection. The report gave details from interviews with personnel, eyewitness accounts, and the train’s salvaged data recorder. The report stated the following:
-“The event recorder indicated that about 38 seconds before the collision, throttle increased from idle to the number 4 position while the train was traveling about 8 mph. Train speed began to increase and reached a maximum of about 21 mph while the brake pipe pressure remained unchanged.”
-“Just prior to the collision, the event recorder indicated that the throttle position went from number 4 to idle. Engineer-induced emergency braking occurred less than 1 second before the collision with the bumping post.”
-“The event recorder showed the train speed was about 21 mph at the time of the collision with the bumping post.”
In their report, the NTSB noted, “The information in this report is preliminary and will be supplemented or corrected during the course of the investigation.”

Since that time, Gallagher has not had any further recollection of the accident, said his attorney, Jack Arseneault of Chatham, last week. Last month, he told the press that since the accident, his client has been diagnosed with sleep apnea.
“I forwarded the formal diagnosis to the NTSB on October 31,” said Arseneault last week. “I advised NJ Transit on October 7 that the sleep specialist physician stated that Mr. Gallagher very likely suffers from sleep apnea and that the accident may be directly related to that condition.”
An individual with sleep apnea has one or more pauses in breathing or shallow breathing during sleep, according to the National Health Institute. It may leave a sufferer feeling fatigued.
But if this condition was a cause of the tragedy, it leaves a big question: How did the train’s throttle move from idle to the number 4 position? Is that something that could happen accidentally?

A former railroad engineer who now works around the country as an expert forensic witness, Augustine F. Ubaldi, explained some of the technical aspects of the NTSB’s report in an interview last week.
Ubaldi works as an expert witness at Robson Forensic in Ohio. He has not been retained by anyone in connection with the Hoboken case but has spoken with national media outlets for several years about other train crashes.
“I started doing this, responding and answering questions and analyzing reports, almost 30 years ago,” said Ubaldi last week. “I have worked on airports and railroads for over 46 years.”
Ubaldi has worked as engineering director for the Greater Cleveland Regional Transit Authority and for various railroads.
He said last week that advancing a train throttle is not something done easily, and would be difficult to do by accident.
“You’ve got to understand. This is not like a gas pedal, that when your foot falls asleep, it pushes the pedal a little,” said Ubaldi. “The throttle is more like a gear shift that has got to click into position one, two, three, and four. It’s a deliberate action. It’s not an accidental thing.”
NJ Transit engineer Gallagher told the NTSB, according to their report, that he did everything properly before entering the terminal. “He stated that as the train approached the end of the terminal platform, he blew the horn, checked his speedometer, and started ringing the bell,” said the NTSB in its preliminary report. “He said he looked at his watch and noticed his train was about 6 minutes late arriving at Hoboken. He stated that when he checked the speedometer, he was operating at 10 mph upon entering the terminal track. He said he remembers waking up in the cab lying on the floor after the accident, but has no memory of the accident.”
Ubaldi questioned this narrative.
“If you fall asleep driving down the interstate, you might miss a traffic stop and go through it and continue at a steady rate, but you wouldn’t speed up,” said Ubaldi. “If he fell asleep, how would the throttle have moved up to the four position? From what I’ve read there was no reason to advance the throttle as there is no upgrade in the tracks.”
Gallagher had told the NTSB “he felt fully rested upon arriving at work,” according to the Oct. 13 report.
He also told the NTSB he had conducted a brake test prior to departure and the train was operating normally throughout the trip.
The NTSB has determined that Gallagher’s cell phone was properly locked up and stored away during the trip, as is mandatory.

What about the brakes?

The NTSB report also stated “The brake pressure remained the same,” but what does this mean?
“When you drive a car and step on the brakes, you compress a fluid in the break lines, which pushes the brake pads and stops your car,” said Ubaldi. “Train brakes work similarly but release compressed air… For the engineer to slow the train down, he takes a reduction of air which means he takes a certain amount of air in the reservoir for each car out, causing the brakes to engage.”
The line in the report means that the engineer did not engage the brakes as the train began to increase in speed to 21 m.p.h. because the pressure remained constant.
“He [allegedly] didn’t touch the brakes, or there would have been a change in the pressure which takes time to build back up,” said Ubaldi.

Since the sleep apnea diagnosis, the Federal Railroad Administration (FRA) announced they are working on regulations to address worker fatigue.
NJ Transit also stated that it no longer allows its engineers who exhibit symptoms of sleep apnea to operate trains until properly diagnosed and treated.
“The Sleep Apnea Screening Process has been in place since at least 2005; however, we instituted an interim measurement of the screening process in October 2016,” said Nancy Snyder of NJ Transit recently.
A similar accident occurred in December of 2013 in which a southbound Metro-North passenger train derailed by taking a 30 m.p.h. curve at 82 m.p.h. Four people died and at least 61 people were injured. The train was heading from Poughkeepsie to Grand Central Station hen it derailed in the Bronx.
The NTSB determined that “The probable cause of the accident was the engineer’s noncompliance with the 30 mph speed restriction because he had fallen asleep due to undiagnosed severe obstructive sleep apnea exacerbated by a recent circadian rhythm shift required by his work schedule.”
According to the American Sleep Apnea Association, “It is estimated that 22 million Americans suffer from sleep apnea, with 80 percent of the cases of moderate and severe obstructive sleep apnea undiagnosed.”
NJ Transit has taken additional safety measures since the crash, including having a conductor ride in the cab car with the engineer when arriving at Hoboken and Atlantic City terminals.
Arseneault said last week that Gallagher was traveling in the cab car alone at the time of the accident.

A family in mourning

Fabiola De Kroon, a native of Brazil, had moved to the west side of Hoboken with her family about six months before the accident. She was on her way to work in Brooklyn when she was struck by debris.
Her husband Adrianus “Daan” De Kroon was in Massachusetts on business at the time of the accident. He rushed home to pick up his 18-month-old daughter at day care.
After the accident, their daughter’s day care center set up two Gofundme fundraisers to raise money for a scholarship and for orphanages in Brazil. They also hosted a candle-light vigil in Columbus Park to show support for the family, although Daan De Kroon and his daughter had already gone to stay with relatives in Brazil by then.
In October, the owner of the day care, Karlos Magner, told a New York Times reporter about a conversation he had with De Kroon after the accident. “He said, ‘What should I tell her? How should I handle this?’ ” said Magner to the Times. “I told him honestly; ‘I don’t know. There’s no book. Life, we’re not trained. We don’t know. So just stand strong.’ ”
Day care workers told the Reporter after the accident that De Kroon intended to return to Hoboken in several months.
Daan did not respond to messages sent to him via the internet last week. His LinkedIn employment history was changed on Oct. 16 to “full time dad.”
As for the engineer, since the accident, he “has been getting physical therapy and trying to survive this horrible tragedy,” said Arseneault.
When asked what Gallagher thinks may have happened that day, Arseneault said “He truthfully answers all questions he can and leaves the speculation up to others.”
When asked if the engineer had an explanation for how the throttle may have been moved, Arseanault simply responded, “No.”
Marilyn Baer can be reached at marilynb@hudsonreporter.com.

After the Hoboken train accident, some experts said it could have been avoided if Positive Train Control had been in place by then.
According to the Association of American Railroads, Positive Train Control (PTC) is a set of highly advanced programs designed to make rail transportation safer by automatically stopping a train before certain types of accidents occur. It will take control of the train’s speed if the engineer does not take appropriate actions.
In 2008, Congress passed a mandate requiring America’s privately owned railroads to finance, develop, and install this technology by Dec. 31, 2015.
In 2015 Congress provided a three-year extension, calling for PTC installation in 2018. The new legislation, called the PTC Enforcement and Implementation Act, also allows for another two-year extension if certain requirements are met, according to the Federal Railroad Administration.
According to a 2016 report, NJ Transit did not have PTC installed and had not made much progress in doing so.
“PTC has been one of our priorities,” said NTSB Vice Chairman Bella Dihn-Zarr to reporters before coming to Hoboken to investigate the accident. “We know it can prevent accidents. That is definitely one of the things we will look at.”
In October, U.S. Sens. Bob Menendez and Cory Booker wrote a letter on behalf of the New Jersey delegation supporting NJ Transit’s request for federal funding to advance its implementation of Positive Train Control (PTC) along its rail lines.
But train expert Augustine Ubaldi questioned last week if PTC could have helped.
“I am not sure PTC is sophisticated enough to help stop a train in this instance,” he said. “The platform was such a short distance away.” – Marilyn Baer