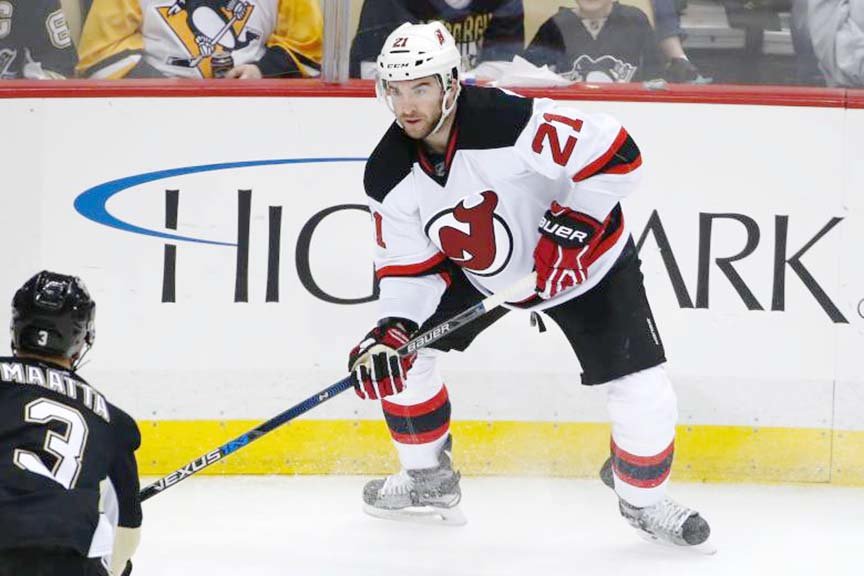 It’s safe to say Kyle Palmieri is loving his hockey life these days.

Palmieri, the former St. Peter’s Prep standout, is in his second season playing for his hometown New Jersey Devils after five years with the Anaheim Ducks.

Palmieri was raised in Montvale, N.J., just a half hour or so away from the Prudential Center.

So his trade from Anaheim to New Jersey was a gigantic homecoming, as Palmieri instantly became the face of the franchise, a local boy coming home.

“It’s been awesome,” Palmieri said in a recent interview after practice. “At first, there was the initial shock of being traded. But then when you realize that you’re now moving back home, close to my family and friends that I grew up with, I couldn’t wait to get started with the Devils.”

The 25-year-old Palmieri had a sensational first season with the Devils, registering career highs in goals (30) and assists (27). For that, Palmieri was rewarded with a five-year, $23.5 million contract in the offseason.

So Palmieri has found a hockey home near his childhood home. It’s what every kid dreams of.

“I think there were a bunch of little things that added up,” said Palmieri, who now resides in Hoboken. “I think the biggest reason was having family and friends from outside the hockey world with me on a regular basis. I was able to let loose a little and just get away from the game, because it can be a grind.”

Palmieri settled in Hoboken because he spent a lot of time there a few years ago helping in the care of his former coach at Prep, Joe Maione, who had suffered a stroke.

“I spent a lot of time in Hoboken where Joe lives,” Palimieri said. “I stayed a couple of nights per week there and got to know Hoboken well. Joe was my friend and he needed help to get better. It’s been great living here. I have a sister and an uncle here. My sister’s husband was just deployed to Afghanistan, so we spend a lot of time together. It’s nice to have the whole family close by again.”

And Palmieri said that he recently watched his alma mater, St. Peter’s Prep, face off against Seton Hall Prep in the AmeriHealth Pavilion, which is adjacent to the Prudential Center.

“I gave some of the guys fist bumps before the game,” Palmieri said. “It was good to be with them. It’s great to get recognized as the guy who grew up and played in Jersey. It makes it more tangible and real.”

Palmieri hasn’t enjoyed the same success this season as he had last year. After 26 games, the Devils’ top right wing has only four goals and nine assists for 13 points.

But the Devils are winning. If the playoffs were to begin today, the Devils would make the NHL Eastern Conference playoffs for the first time in five seasons.

“We’ve put ourselves in a good situation,” Palmieri said. “It’s tough to gauge with all the travel that we do, but we definitely control our own destiny. Our focus right now is to get this team into the playoffs. Everyone here is pretty confident.”

It led to a long-term relationship between Palmieri and the United States National Team.

“Playing in the World Cup last summer was a huge goal of mine,” Palmieri said. “When I was asked to play, it was one of the biggest honors of my life. I got a chance to represent my country. It was a pretty incredible experience.”

Since he’s only 25, there’s a chance that Palmieri will get the opportunity to skate for Team USA in the 2018 Winter Olympics in Pyeongchang, South Korea.

“A lot of the older guys are looking forward to the Olympics,” Palmieri said. “If I’m lucky enough to play with them, it would be a pretty huge honor. I’d go from watching Team USA play as a kid to being on the team. It would be pretty amazing. But that’s a long ways down the road for me. We have time to scout the others and prepare. For now, my focus is on this season and getting this team into the playoffs.”

Palmieri can see that the Devils have improved tremendously this season, with a healthy Travis Zajac, the addition of high-scoring winger Taylor Hall and the emergence of Damon Severson as a scoring defenseman.

“We’ve improved a lot,” Palmieri said. “We have a really confident group. We knew we had the players in place to get into the postseason. We just have to keep working. We’ve got to prove it to ourselves that we can play with anyone.”

And Palmieri is doing in right in his own backyard…

The girls’ First Team has Celeste Aurora and Suhayla Johnson of St. Dominic Academy; Jasmin Lim of McNair Academic, Rachel Malkowski of Union City and the surprise of the county Weeshamar Senatus of Hudson Catholic.

The Runners of the Year were Nasser among the boys and Senatus among the girls. Both return next season…

Royaal Jones, the 2015-2016 Hudson Reporter Male Athlete of the Year from Hudson Catholic, is making news on the collegiate rugby scene at American International College in Springfield, Mass.

Jones scored six times for the Yellow Jackets, ranked No. 1 in the country for NCAA Division I-AA teams…

Another rugby standout, Jersey City native Eamonn Matthews, a sophomore at St. Bonaventure University, was one of 18 NCAA Division I athletes asked to attend the East AIG Men’s Junior Evaluation Camp in Atlanta….

The U.S. Army All-American Bowl Selection Committee announced a list of six finalists nationwide for the prestigious Coach of the Year Award. One of the six is West New York native Gabe Infante, currently the head coach at St. Joseph’s Prep in Philadelphia. The winner will be announced during the 2017 U.S. Army High School All-American Game Jan. 6 in San Antonio. Just to be considered is a huge honor for Infante, who carved his teeth locally as an assistant at places like his alma mater Memorial, Bergen Catholic and Queen of Peace…

To see the Kyle Palmieri feature as Hudson Reporter Athlete of the Week, log onto http://www.hudsonreporter.com/view/full_story/2411447/article-The-ice-king-Prep-s-Palmieri-leads-Marauders-to-Meadowlands-and-NJSIAA-semifinals?instance=search_results