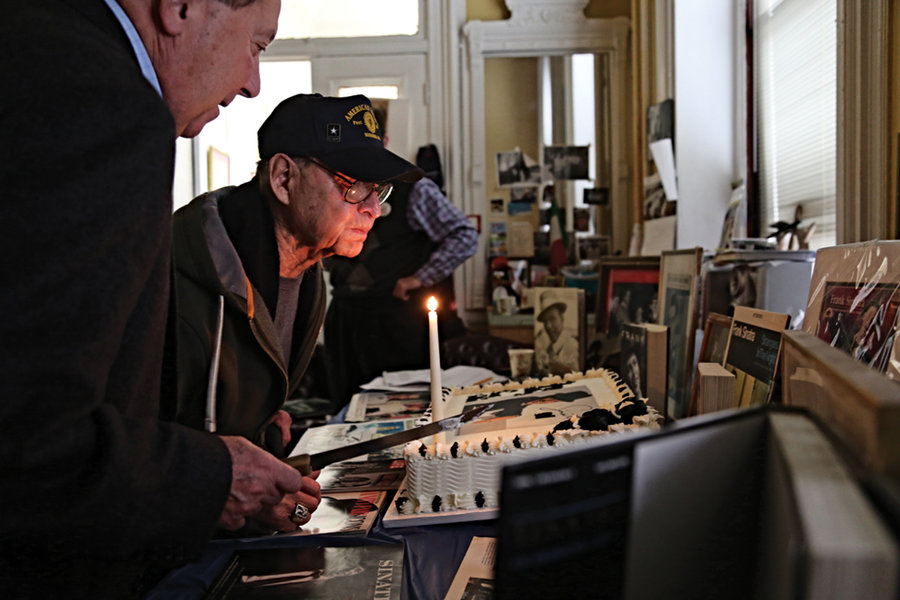 On Monday, Dec. 12, one of Hoboken’s most famous former residents would have turned 101: Legendary crooner Frank “Ol’ Blue Eyes” Sinatra. To commemorate the special day, City Clerk James Farina, a big Sinatra fan and local legend in his own right, hosted the annual City Hall birthday party for the singer.
For the small birthday celebration in the clerk’s office, Farina displayed his personal Sinatra memorabilia including magazine covers, Frank Sinatra books, and Sinatra’s key to the city from 1947. He and other local residents also shared their connections to the singer.
Vinny Wassman, a local World War II and Korean War veteran, did the honors of cutting a cake made by Carlo’s Bakery and blowing out the candle.
“I remember meeting Sinatra for the first time,” said Wassman. “We were all standing in line in our underwear to get an examination [for the military draft] and we booed him because he got deferred for a punctured ear drum.”
But Wassman noted, “He made Hoboken famous and was an asset.”
A handful of attendees enjoyed cake and celebrated Sinatra’s memory, sharing stories and personal connections to the man of the day.

_____________
“Every Sunday they went to my grandmother’s house to rehearse.” – James Farina
____________
Farina has been hosting this birthday parties since he became an employee of the city in 1977 when he was the director of health and welfare. (Farina was also a long-serving Board of Education member in town).
“Frank Sinatra was part of my family in Hoboken,” said Farina. “My uncle James Petrozelli was one of the original Hoboken Four.”
Farina said he grew up listening to his uncle, a longshoreman by trade, tell stories including his time entertaining with Sinatra.
“Every Sunday they went to my grandmother’s house to rehearse,” said Farina. “And Sinatra loved it because my grandmother would cook pasta and have a traditional family meal.”
Farina said after the group won the Major Bowes talent scout program, they started to travel and tour the country.
“My uncle got homesick” and the group broke up, said Farina. “But they always remained friends.”
Ralph Gallo, resident and retired firefighter, recalled stories of his father Carmen Gallo and Sinatra palling around in their younger years.
“ My father lived across the street from Sinatra,” said Gallo. “If they wanted to go the movies, what they would do is, Frank would stand on the corner and sing, and old-timers would throw them pennies. Soon enough they would have enough money to go and see the movie.”
“I wish he visited Hoboken and acknowledged it more,” said Gallo of Sinatra. “The old-timers loved him.”
Gallo said Sinatra did visit a few times, including his 1984 visit with President Ronald Reagan. Gallo added that he saw him a few times as a teen working late nights at a local restaurant on upper Madison Street.
“He would come in late at night to a back room,” said Gallo. “I got to wave to him but I never had the chance to talk with him about my father.”
Farina said that Sinatra actually visited Hoboken often during his life, but stayed out of the public eye.
“He would come to see his godfather Frank Garrick who lived in Fox Hill Gardens [senior citizen housing],” said Farina. “He came to some of the birthday parties in the past and I noticed a nice watch he was wearing at one of the parties. He told me that every time Sinatra came to New York he would come to Hoboken and visit him really late at night like two or three in the morning. Sinatra gave him that watch at one of his visits. He never forgot his roots.”
Marilyn Baer can be reached at marilynb@hudsonreporter.com.