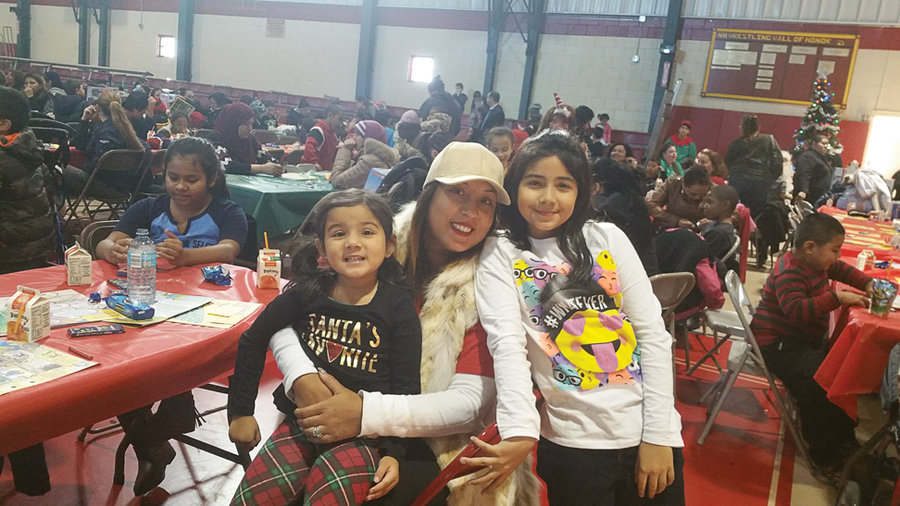 More than 500 children received gifts like dolls, bikes, tablets, guitars, drones and more at a party Saturday, Dec. 3 in the North Bergen Recreation Center. The money for the gifts and party came from the town budget, approximately $25,000, said Town Administrator Chris Pianese
Commissioner Hugo Cabrera said, “There are a lot of elves in the recreation department.” Those elves gave popular toys to kids ages 2 through 9, including Easy Bake Ovens, Nerf guns, sewing machines, and 125 Amazon Fire tablets. The kids also took pictures with Mr. and Mrs. Claus.

_____________
“I remember going to this when I was a little girl.” – Sarah Martinez
____________
One of the children waiting for a toy, Manny Pagan, 5, said, “I want something that spies on people, like a robot with a camera.” Pagan’s sister Mia, 3, got a Doc McStuffins doll from the commissioners.
“I remember going to this when I was a little girl,” Pagan’s mother Sarah Martinez said. “My mother brought me to these, and now I’m going to bring my kids.” Martinez said she has lived in town since age 3, but this is her children’s first Christmas event.
Residents Savannah Schumski, 9, and her brother Ryan, 11, were waiting with their friends and grandmother for their brother Jacob, 2, to come back with his gift.
“I want a laptop for Christmas,” Ryan said. Their mother April finally came back with Jacob to show everyone his new Vtech playset.
One of the Schumski’s friends, Sabrina, at first couldn’t decide what she wanted for Christmas. “I want a Barbie.” Then Sabrina said, “I change my mind, I want a real life pony.” Then: “Never mind, I want everything.”
“I want a dog for Christmas,” Sabrina’s sister Angelina, 9, said.
Sitting on her mother Priscilla Ramirez’s lap, Izabella, 5, said, “I want to get a bike, but I don’t think I’m getting it here.”
Priscilla said, “We missed this last year, so I promised I’d bring her. I’ve been coming here since I had my son, and he’s 16 now.”
The event was hosted by Mayor Nicholas Sacco, the Board of Commissioners, and the Parks and Recreation Department.
Samantha Meyers can be reached at samantham@hudsonreporter.com .