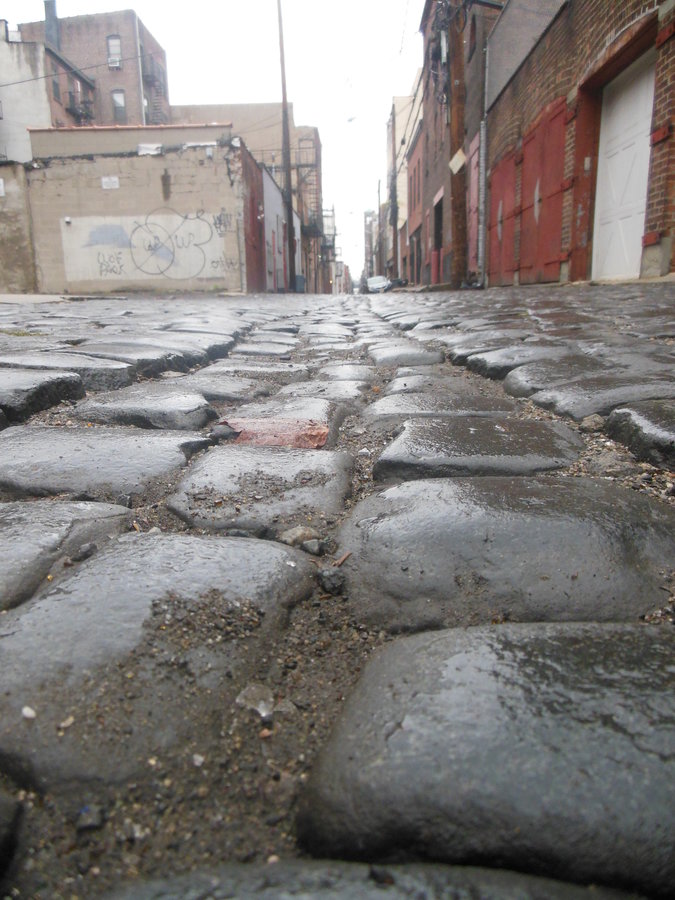 On the morning of Dec. 2, Councilman Michael DeFusco took to his computer and posted an online petition urging county officials to give Hoboken a $500,000 grant to preserve and renovate Court Street. The narrow cobblestone avenue between Hudson and Washington streets, known to locals as “The Alley,” is made up of original Belgian blocks from the 19th century.
DeFusco is seeking $500,000 from the County’s Open Space Trust Fund, which will be awarded sometime next spring, according to Business Administrator Stephen Marks.
“Over the past century it has fallen into significant disrepair,” DeFusco said last week.
The project aims to reset the cobblestones of the historic street to make it safer for pedestrians and bicyclists.
So far DeFusco’s petition has gathered over 200 signatures, more than he expected.
“I think putting names on paper is the most efficient and significant way to indicate support,” said DeFusco.
The street is a municipal street (and not a private road as some believe), but DeFusco is hoping the county will assist with it.

Court Street, which runs downtown up to Seventh Street, is one of Hoboken’s last remaining historical cobblestone streets, according to Susan Pregibon, a commissioner for the Historical Preservation Commission.

_____________
“This isn’t a project that needs to be overanalyzed” – Michael DeFusco
____________
“We only have two other authentic cobblestone streets,” said Pregibon. “It’s a disappearing part of history. “
The other two are Willow Terraces North and South, located between Sixth and Seventh streets, and parts of Willow and Clinton streets.
“There are probably less than 10 left in all of Hudson County,” she added.
According to the grant application, “Court Street has been in existence prior to the majority of homes and buildings in Hoboken.
“It was built as a service entrance for the high-end people living on Hudson Street to the east,” Pregibon said.
A person walking along the street can see former horse stables converted to garages, and the backs of restaurants and businesses like the famous Carlo’s Bakery.
“Carriage houses, or ‘mews’ accommodated stables for horses and carriages, some along with living quarters above,” states the grant application. “Businesses such as forges and blacksmiths also existed on Court Street. It is the only collection of carriage houses and former stables in Hoboken.”
Pregibon said that in the 700 block of Court Street there was a marine hardware company that made latches and pieces for boats up until the 1980s or 1990s.
“Court Street is over 150 years old, as are the stables along it,” said Pregibon

DeFusco says he has heard complaints from many residents who cite pedestrian safety concerns and mice infestations.
“Pedestrian safety could be significantly better,” said DeFusco. “Seniors have called me and told me the cobblestones are in such uneven disrepair that they are afraid of falling in the street.”
Cars sometimes use Court Street, although it’s narrow. DeFusco said cars “careen” out of the passageway “into the numbered streets.”
Many businesses along Washington use Court Street as a truck delivery entrance and residents use it to enter garages and parking.
Pregibon said the stones were originally set in sand and would have shifted a bit with the use of cars and trucks.
“These stones were set 150 years ago or more,” said Pregibon. “The stone itself isn’t damaged; it’s what happened during gas line installations and other types of utility construction, or residents who have tried to make it easier to get into their garages and have put in patches of asphalt which is now cracked or gaping.”
According to city spokesman Juan Melli, the city has not received many complaints in regards to Court Street from residents.
“I was able to find one pothole complaint in 2014,” said Melli.

DeFusco said that although Court Street is not a county road, he believes the county should help preserve the eight-block stretch.
“Hoboken taxpayers pay the most in taxes to Hudson County, and we are asking for something that will help the overall quality of life in the area,” said DeFusco. “The county can’t look at county roads and municipal roads and draw a distinct line. They all intersect and hopeful they see this as an investment for county as well as the city.”
Marks said in the past that he doesn’t believe the county will fund the project because the application has no plans or estimates, only a project narrative.
Hoboken Freeholder Anthony Romano said he strongly agrees with DeFusco that Court Street needs to be recobbled to correct the walking conditions. He often sees mice and rats along the street.
He said he has lobbied the other freeholders, stressed the importance of this project to them, and hopes the project is awarded the funds.
DeFusco said that $500,000 will not be enough money to pay for the entirety of the project but will be a “significant first step forward. “
He said the $500,000 will allow the city to have an engineering study done and fund a complete street concept “and get us significantly underway for the actual recobbling of Court Street.”
“We will need to find money in the municipal budget and other grant opportunities and continue advocating for it into the new year and beyond,” he said.
DeFusco wanted to have city funds allocated to an engineering study of Court Street to help make the grant application more competitive but was told by Hoboken City Hall that “there was no money remaining in this budget to fund it.”
DeFusco said he was told the study would cost $52,000.
“It wasn’t a priority for the administration at the end of this year,” DeFusco said at the council meeting Dec. 7, “unlike the office furniture.” He was referencing a resolution to award a $35,080 contract to purchase office furniture for City Hall.
“The city is working on acquiring the BASF property, repaving and upgrading the infrastructure on Washington Street, and expanding the Southwest Park, among other projects, and Court Street is also on the city’s goals of projects to complete,” said Mayor Dawn Zimmer. “Improving quality of life for our residents is a continuous process, and next year we will work with the council to put the funding into the budget for the planning and engineering necessary to complete a plan for Court Street in order to submit a more complete application for grant funding.”

Court Street is the site of many walking tours and photography sessions, according to Pregibon. “I have seen so many photographers taking wedding or engagement photos up and down Court Street,” he said.
Some stables have been converted. “Over the past year we have seen about five or six applications to create residences on Court Street,” said Pregibon.
DeFusco said the city needs to work on Court Street to create a destination thoroughfare and to “create a vibe and atmosphere that’s distinctly 19th Century Hoboken. He said he got a lot of ideas from his travels to locations like London that have similar former service streets that have residential character.
The famous 1954 film “On the Waterfront” starring Marlon Brando was filmed in Hoboken and some scenes took place on Court Street.
The film depicts a mob hit in which Charlie, played by Rod Steiger, is killed and hung up by a longshoreman’s hook and his body is found on Court Street.

Marilyn Baer can be reached at marilynb@hudsonreporter.com.