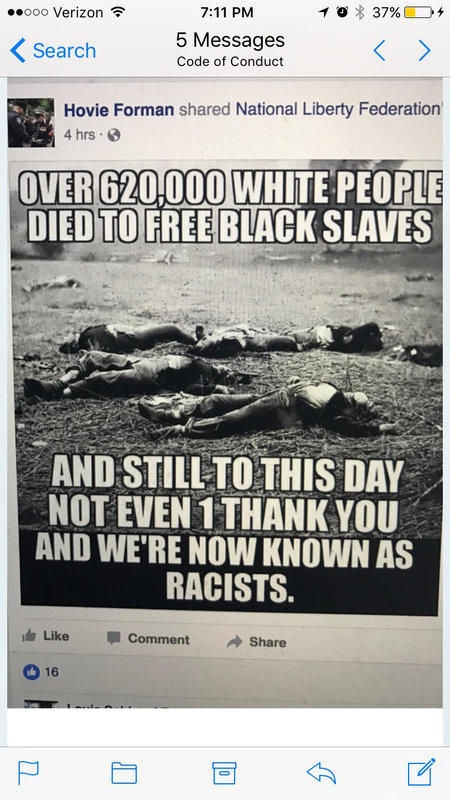 HOBOKEN — At Wednesday’s Hoboken City Council meeting, Councilman Ruben Ramos questioned a Facebook post made last month by Hoboken Housing Authority Commissioner Hovie Forman.
Howie Forman is one of seven unpaid commissioners on the board that oversees the city’s 1,353 federally funded units of low-income housing.
The meme in question, posted by Forman to his personal Facebook page, stated “Over 620,000 white people died to free black slaves and still to this day not even 1 thank you and we’re now known as racists.”
The number appears to refer to the loss of life during the Civil War. Forman has also made several political posts in favor of Donald Trump, but none of those referred to racial issues.
While Forman did not respond to e-mail, Facebook, and phone messages left for him on Thursday, he reached the reporter on Friday just after press time. Forman said in a phone interview that he recalled posting the image on his Facebook page, but that he posted it because he thought it was wrong.
He said, “Actually on top of it I should have put ‘yeah right’.”
“I remember when I looked at it, I said to myself, who in their right mind expects a thank you,” said Forman.
Forman said he regrets not taking his time with the post.
“I didn’t put it up to expect someone to tell me thank you, “ said Forman who added that his mother is Puerto Rican and that he grew up in the Hoboken Housing Authority.
Over the conversation at City Hall, Forman said he was not contacted by Ramos to ask for an explanation.
“Ruben knows me, we both grew up in Hoboken, I don’t know why he didn’t call me,” said Forman. He did say a mutual friend of theirs asked the day after the meeting whether they could give Forman’s number to Ramos.
“At least give me a courtesy call and say ‘Hovie what is this?’ and let me explain,” said Forman.
Forman said “If anybody thinks I’m racist I’m more than happy to take them through a tour of the Hoboken Housing Authority and show that they will talk to me there and they will tell you I’m not racist.”
Forman said he had not been contacted before about his postings on social media other than a conversation with Councilman Michael DeFusco and HHA Chair Dana Wefer “who contacted me about it to let me know to reach out to [the Reporter].”
To read the full story on Wednesday’s meeting, see Hoboken news starting Sunday, Dec. 10, or read the Hoboken Reporter on your doorstep.