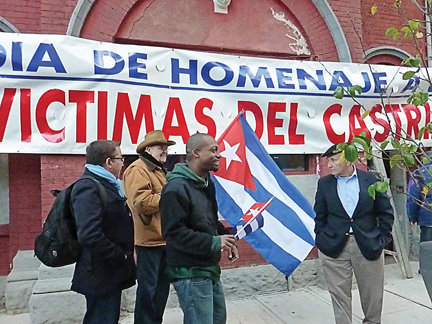 For many old-time Cuban residents of Hudson County, the death of Fidel Castro is personal. Some recall fleeing his Communist regime when they were children, to take refuge in the United States.
Some extremely long-time residents recall when Castro came to Union City in the late 1950s to raise money for what was then seen as a noble cause, hoping to overthrow an oppressive government. The fact that Castro a short time later became a dictator himself left many of these same people feeling betrayed.
At the corner of 43rd Street and Bergenline Avenue in Union City, people – ordinary residents of the area – began to sign a poster in the shape and colors of the Cuban flag last week. Most messages were in Cuban and most celebrated Cuba’s liberation, although the country is still under the Communist rule of Raul Castro, Fidel’s brother.
Castro died on Nov. 25 at the age of 90.
Though commercial flights to Cuba started this week from nearby Newark’s Liberty Airport, none of the local travel agencies that line this part of Bergenline Avenue advertised them.
Down 43rd Street, a group of men and women waved Cuban flags and chanted slogans of liberation – in an emotional outburst that only six decades of repression could produce. Most were older Cubans who bore a living memory of life in Cuba and the repression that forced them or their families to flee. Over the decades, waves of repression in Cuba often resulted in waves of Cuban refugees risking their lives to leave. Many perished in makeshift boats during the 90-mile sail to Florida. Many left loved ones behind.

During the week of Castro’s death, local officials called for increased restrictions against the country’s leadership.
“Fidel Castro defiled democracy, oppressed innocent people, and imprisoned a nation with his totalitarian tactics,” said Rep. Albio Sires. “His passing needs to serve as a new dawn for the Cuban people who are yearning for freedom. The international community should seize this moment and insist that the Cuban people deserve more. We must insist that all political prisoners are freed and that basic human rights are respected. The Cuban people deserve to live in a society where they have the freedom to access information, to organize, to worship, and to speak what is on their mind without fear of being thrown into the gulags. It is time to honor the sacrifices made by them and the countless families who continue fighting tirelessly to shed light on an island that has been shrouded in darkness for far too long.”

_____________
“This death will mean people in Cuba may get a chance at a better life.” – Felix Roque
____________
Sires left with his parents from Cuba when he was 11 years ago, in order to escape Castro’s communism.
“When I was only 11 years old my parents made the courageous decision to leave the island to protect my family from Castro’s communist ways,” Sires said. “It is thanks to their sacrifice that I was able to grow up in the United States of America, where I enjoyed the basic freedoms and human rights that the Cuban people both deserve and desire. It is time to honor the sacrifices made by them and the countless families who continue fighting tirelessly to shed light on an island that has been shrouded in darkness for far too long.”

Menendez said opening relations with Cuba is a mistake

Speaking at the headquarters of the Union of Ex-Political Prisoners of Cuba, U.S. Senator Robert Menendez said while Castro’s death marks a moment in history, it does not spell the end of repression in Cuba.
He said Castro’s brother, Raul Castro – as head of the military – has more blood on his hands than Fidel.
He said people have been tortured, jailed, and murdered and that the lifting of restrictions by President Barack Obama two years ago made things worse, leading to increased repression, not less.
“There is still a Castro reigning with an iron fist,” he said. “Time has numbed us and weakened our resolve.”
He said more people are fleeing Cuba than 20 years ago, and the United States needs to “recalibrate” its policy towards Castro rather than condone what is going on. He said the U.S. must insist on free press, open and fair elections, and access in Cuba to UN human rights inspectors.

“As a physician, it is difficult for me to see any human being die,” said West New York Mayor Felix Roque. ‘But this death will mean people in Cuba may get a chance at a better life.”
Roque said the fight for freedom in Cuba is not over, and that Castro’s brother remains a significant obstacle to freedom.
Roque, who emigrated from Cuba with his family at the age of 11, said he intends to take a bigger role in helping the people of his native land.
“The real solution has to be done through the business community there,” he said. “I intend to get involved in helping make changes.”

Hudson County Freeholder Caridad Rodriguez left Cuba in 1962 with her immediate family. Her grandparents, who remained behind in Cuba, told her parents, “Don’t worry, it will only be a six-month trip”.
In reality, the time has turned into 54 years and counting. Other relatives were incarcerated. One of her cousins was killed by Castro’s regime. Rodriguez’s family suffered immensely under Castro’s rule, ultimately losing everything they owned.
Castro, the dictator, focused only on Socialism and Communism and with certainty, death for the Cuban people. He ruined Cuba by stripping the Cuban people of their morals, their dignity, their traditions, their civil rights, and their properties.
The Rodriguez family was able to prosper in their new country, the United States of America. They excelled educationally, financially, professionally and within the political system, in the United States.
They are living the American dream in a free democratic society. But nothing will change because of Fidel’s death. They already have an established hierarchy to keep the Cuban people oppressed.
Rodriguez said she and her family will not return to Cuba until it is a free democratic society where the people have a say in their country and how their government is run.”

Because of the news from Cuba State Senator and Union City Mayor Brian Stack and the commissioners held a Cuban flag-raising ceremony at the corner of 38th Street and Palisades Avenue on Nov. 28
“We hope this is the first step towards democracy and total freedom for our family and friends in Cuba. United we stand,” he said.
Al Sullivan may be reached at asullivan@hudsonreporter.com.