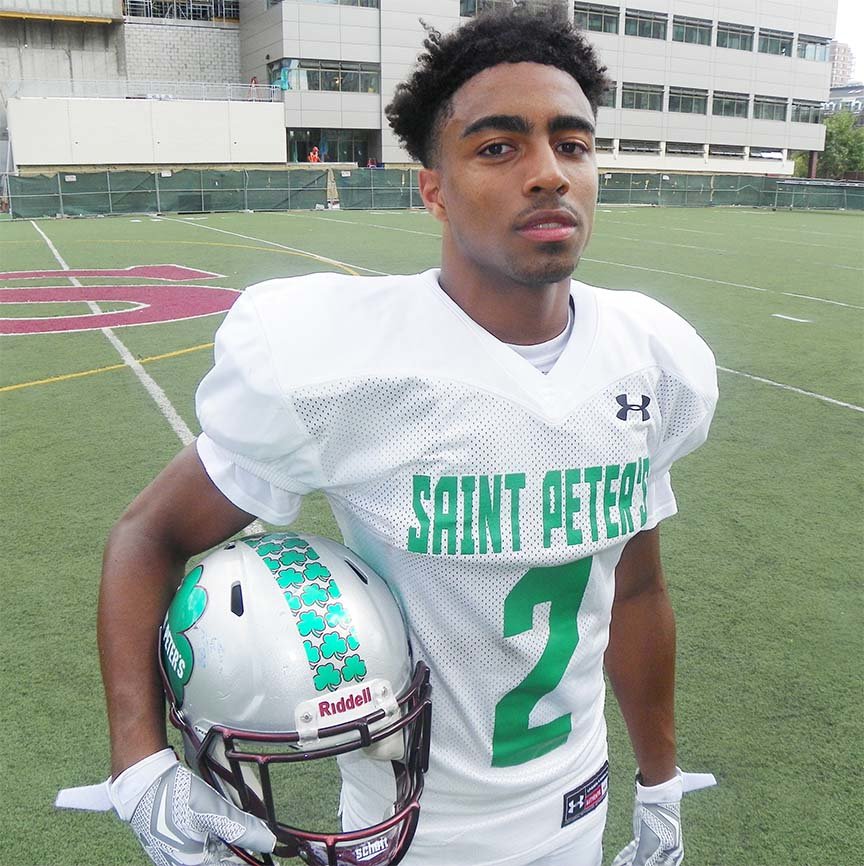 It’s safe to say that Jorge Portorreal was a late bloomer when it comes to sports.

The St. Peter’s Prep senior wasn’t much into sports when he was a youngster growing up in his native Union.

“But things didn’t go too well,” Portorreal said. “I got smacked around.”

So that ended the gridiron.

“I tried track for a bit,” Portorreal said. “I honestly wasn’t interested in playing sports. It wasn’t a desire of mine.”

When the time came to attend high school, Portorreal took the advice of his mother, Joi Smith, who suggested St. Peter’s Prep.

“I was just going to get an education, not to play sports,” Portorreal said.

When Portorreal was a freshman, his mother encouraged him to try out for the football team.

“I didn’t like it at first,” Portorreal said. “I wasn’t starting. I really wasn’t interested in it.”

But then Smith, a former athlete in her heyday, took over.

“She encouraged me to give football a try,” Portorreal said.

He then caught himself in telling the story.

“Actually it was Coach [Ed] Roselle who called my Mom,” Portorreal said. “And my Mom told me to do it. It changed everything.”

Roselle was the freshman head coach at the time. He is currently the program’s director of football operations.

“Then things went absolutely nuts,” Portorreal said. “I scored about 20 touchdowns. I was hooked.”

Three years later, Portorreal has emerged as perhaps the premier pass catcher in the state of New Jersey.

In the NJSIAA Non-Public Group 4 semifinals against rival Bergen Catholic, Portorreal caught four passes for 81 yards and a touchdown, leading the Marauders to a convincing 28-7 victory and punching their ticket to the state title game against Paramus Catholic at MetLife Stadium this weekend.

For his efforts, Portorreal has been selected as The Hudson Reporter Athlete of the Week for the past week.

Portorreal got his senior season off to a flying start in Dublin, Ireland, when he caught two passes for 50 yards and a touchdown, carried the ball three times for an additional 50 yards and another touchdown and scored on a 45-yard interception return, leading the Marauders to a 41-28 win over Blessed Trinity of Atlanta.

“We had an idea of what he could do,” Hansen said. “He had more of a supporting role with the team. We saw flashes of good things and hoped that the flashes would become consistent. But he got out of the box well in Ireland and hasn’t stopped since.”

Now, Portorreal has become the type of big-play maker that former Hudson Reporter Male Athlete of the Year Corey Caddle was with the Marauders in their state championship run of 2014, before Caddle headed off to play football at Fordham.

“I learned so much from guys like Corey and Minkah [Fitzpatrick, currently the standout cornerback for the top-ranked college team in the country Alabama],” Portorreal said. “Corey worked with me all the time. We still talk all the time.”

“He played with Corey and understands what I’m talking about when I use Corey as a reference point,” Hansen said. “I think it makes it easier for Jorge. But a kid who is that athletic and is that fierce of a competitor is going to succeed. He took over in that Ireland game and it was a relief to see him do so well. He has that competitive edge, that swagger that I like. He’s able to channel it in the right direction. I love that. Jorge knows who he is. He’s comfortable in his own skin.”

Portorreal likes his role with the Marauders.

“I honestly enjoy the big time role,” Portorreal said. “Last year, I was more low keyed. But I like being the No. 1 passing target for John [Marauder quarterback and former Reporter Athlete of the Week Johnathan Lewis]. I love it.”

Portorreal has caught 48 passes for almost 700 yards and eight touchdowns. He’s also scored two touchdowns via interceptions, one via punt return and one rushing, showing his incredible versatility.

Hansen has a line that he refers to a lot—and it applies now to Portorreal.

“Big time players make big time plays in big time games,” Hansen said. “I live and die with that line. He’s going to have the opportunity now to do some great things. We’re playing for it all now and we need all our weapons at our disposal. He’s going to get the chance to go out there and do his thing for the last time.”

Portorreal already knows where his future lies. He’s signed his national letter of intent to attend Lehigh University next fall—and play the same position that Caddle does for Fordham. The two will be mirror images when they face each other next year.

“It’s a good school,” Hansen said. “Jorge is an excellent student [3.3 grade point average] and will do well there. I think we always hoped he could be what he’s turned out to be.”

Portorreal is also an excellent basketball player for the Marauders and will join Alex Mirabel’s team once he recovers from the long football season.

“There are the pluses and minuses of missing some time from basketball,” Portorreal said. “Coach Mirabel has motivated me to play well because it will carry over to basketball.”

Portorreal likes how he has blossomed into a two-sport standout—and maybe a three-sport competitor if his friends talk him into running track in the spring.

“I’m willing to do it, but I don’t think I can,” Portorreal said. “My Mom ran track. She’s pushing me toward it.”