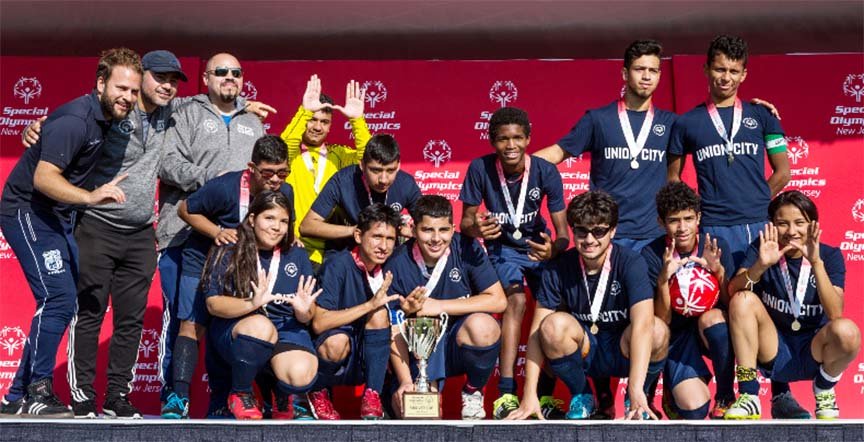 Suaza knows all the players on the Union City soccer team and follows the progress of the Soaring Eagles religiously.

“I tried to be the equipment manager last year,” Suaza explains. “But I just couldn’t do it.”

His cousin is Andrew Nino, who just finished his freshman season playing soccer at NJIT, starting every game for the Highlanders.

“I like watching him play,” Suaza said. “He’s very good.”

Suaza is developmentally disabled, so his chances of playing varsity soccer are slim and none.

“I’ll never get the chance,” Suaza said, with a defeated voice.

Sonya Flores is a 15-year-old freshman. She is also a special education student at the high school with a developmental disability.

But Flores’ father, Juan, was a standout soccer player in his native Honduras and now coaches a Union City travel soccer team. Her sister, Nina, is 11 years old.

“She’s a phenomenal player,” Flores says of her sister.

Flores loved to play soccer with the Union City Recreation program, but when it came time for high school, there was no opportunity to play.

A native of Buffalo who attended Caldwell College and played soccer there, Lozano was hired by the Union City school district a few years ago to work with special education students, primarily autistic students. He first had a class of students at Union Hill Middle School and later was moved to the high school to begin a program there.

Lozano has approximately 20 to 30 students with disabilities that he works with annually.

Suaza and Flores are two of those students.

Lozano also has a background in soccer, having played the sport and coached it. He wanted to coach his kids in soccer.

So the group met twice a week for training and practice. There were scrimmages among themselves, but no real competition to speak of.

That was until last year, when Lozano entered a Union City team in the Unified Special Olympics Shriver Cup.

According to Special Olympics, the tournament brings people with and without intellectual disabilities together to compete on the same team, helping to foster leadership skills, friendship and build more inclusive school climates through sport.

More importantly, it was finally a chance for special kids like Suaza and Flores to actually play competitive soccer.

“Kathy Morales on the varsity taught me how to train,” said Flores, who doubles as both a defender and a forward on the team. “I’m glad they were able to help us out. I felt really glad that I was able to be on a soccer team. It gave me experience for when I get older. I liked Special Olympics, because I was able to make friends all over the state.”

Flores and Suaza are the best of friends.

“We’ve known each other since eighth grade,” Flores said. “I don’t mind being one of the only girls playing with the boys. I get used to it. I’m able to learn more and it makes me tougher and braver. It’s how I made friends. I had a family, but with soccer, I had an even bigger family.”

Suaza also loved the fact that he could play on a competitive team.

“It meant a lot to me, because I never played any organized soccer before,” said Suaza, who is the team’s main defender at sweeper. “I like playing sweeper a lot, because I like blocking shots and not allowing the other team to score a goal. You can win or lose a game like that.”

The team was led by Gustavo Garcia, who scored two goals in the championship game. Garcia is a 17-year-old student at Union City High.

Argus Martinez, the team’s leading scorer, who is 15 years old and deaf. He attends the Union Street School for the Deaf. Oscar Marcillo is also 15 and is a motivating factor. Gerson Hernandez is the 17-year-old goalkeeper who did not allow a single goal in the tournament.

After the Union City team won, there was utter joy and euphoria for these special kids.

“I felt like I was about to drop a tear,” Suaza said. “I never held a trophy before. I was afraid I was going to drop it. I never thought that could happen to me. Last year, we came close. But this year, we were better.”

Suaza is the team’s captain, so he has to make sure everyone listens to coach Lozano.

“When we won the tournament, I was pretty proud,” Suaza said.

“I was actually surprised,” Flores said. “I was surprised and happy. When we won, I felt glad and proud and really happy.”

The school held a pep rally in honor of the returning champions.

“That was cool,” Suaza said.

“We received tremendous support from the school,” Lozano said. “The pep rally was great. We also had many fans who came to support us during the competition.”

For his hard work, Lozano has been named the Special Olympics New Jersey Coach of the Year.

Lozano headed home to Buffalo for the Thanksgiving holiday. He went home knowing that he had a lot to be thankful for.

“I feel so lucky to have the opportunity to work with such tremendous athletes,” Lozano said. “To see the bonds created between players, and the personal growth of each individual, makes everything worth it. Every player on the team has shown so much dedication and always given us their best even when the work has been tough. I try to push each player to realize their potential as an athlete and a respected member of the community and school. I’m thankful to be surrounded by a group of students who came together for the same goal, to play unified and help each other reach their goals. I’m a very lucky coach.”

And the kids of Union City are lucky to have Lozano.

“It just feels great to be able to play soccer,” Suaza said. “I never thought I’d get a chance.”

“I learned a lot,” Flores said. “I just loved being on the team.”

Flores will now be a part of the Union City swim team in the winter months, breaking a barrier there.

“I always had faith in my teammates that we were going to win,” Flores said. “We have a very good team.”